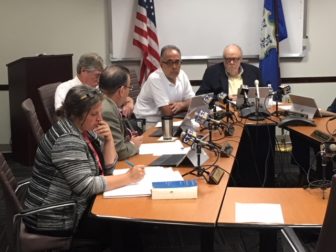 The State Elections Enforcement Commission was briefed Wednesday on the status of public-financing applications.

With one month until the primary, Republican gubernatorial candidate Steve Obsitnik won approval Wednesday of his $1.35 million grant from the state’s voluntary program of publicly financing campaigns, the Citizens’ Election Program.

Obsitnik’s campaign had struggled since late May to convince the State Elections Enforcement Commission that it had properly raised $250,000 in qualifying contributions, but the commission repeatedly postponed action and instead opened an investigation into Obstinik’s fundraising.

The meeting Wednesday marked the eighth time since May 31 that his application was up for consideration, and a consultant to his campaign made a wry comment on the approval as he exited: From his cell phone, a chorus briefly sang, “Hallelujah!”

“While we wish the process was faster, we are pleased with the outcome,” Dan Debicella, the manager of Obsitnik’s campaign, said later in an emailed statement.  “Our campaign can now fully focus on informing voters on Steve’s background as a veteran, high tech job creator, and outsider and his plan to create 300,000 jobs in the next eight years.”

The other two in the five-way primary are two businessman who are largely self-funding their campaigns, David Stemerman of Greenwich and Bob Stefanowski of Madison.

Michael Brandi, the executive director and general counsel of the commission, said 120 public-financing applications from candidates for the General Assembly and statewide constitutional offices have been approved and 67 were pending.

The priority is on applications from candidates facing Aug. 14 primaries. No grant applications can be approved after July 27.

“That’s what our focus is right now,” Brandi said.

No action was take on the applications from two Democratic candidates for state treasurer, Shawn Wooden and Dita Bhargava, who previously has been asked for more information on their donors, and one Republican, Art Linares, whose application was considered for the first time.

Campaigns have complained that the commission’s staff has been more stringent this year in checking qualifying contributions, but Brandi said the standards have not changed.

To qualify, a candidate must have win ballot access, agree to spending and contribution limits, and raise a certain amount of small-dollar contributions to demonstrate public support. The threshold is $250,000 for a gubernatorial campaign, $75,000 for lieutenant governor, $76,100 for other statewide races and small amounts for legislative contests.

The commission also voted unanimously to hold a hearing regarding a complaint alleging that Dave Walker, a Republican candidate for governor who failed to qualify for the primary ballot, had continued to raise money with his exploratory campaign committee after declaring his candidacy.