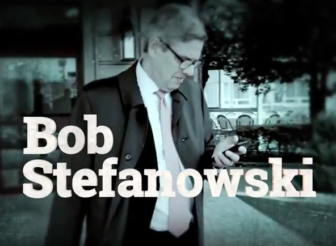 From the TV ad.

The ad, the sharpest spot directed by one Republican against another, follows a line of attack employed last week at a debate by Timothy Herbst, another of the five candidates vying for the Republican nomination in the Aug, 14 primary.

“Republicans shouldn’t be fooled by Bob Stefanowski,” a narrator says in Stemerman’s new ad. “Bob was a Democrat just last July – until he decided to run for governor. Bob didn’t vote for Donald Trump, Mitt Romney, or John McCain. Republicans have been fighting against Democrat Dan Malloy. Bob has been contributing thousands of dollars to help Democrats.”

Americans, of course, vote by secret ballot, but the Stemerman campaign can assert Stefanowski didn’t vote for Trump or those other GOP presidential nominees, because it is a matter of public record that Stefanowski did not vote for 16 years.

At a debate last week, Herbst questioned the Republican credentials of candidates who had only recently become a Republican or given money to Barack Obama. The former was a reference to Stefanowski, the latter to Stemerman. Stefanowski responded to Herbst, while Stemerman ignored him.

Stefanowski conceded he was a registered Democrat until last July, but said his membership in the opposing party was brief.

“I stood up and took the issue head on stating I was a Democrat for eight months, but a Republican for 25 years,” Stefanowski said Wednesday in a written statement. “Ronald Reagan, Larry Kudlow and President Trump are all pretty good former Democrats as well!  I lived overseas for years and traveled extensively. I should have filed an absentee ballot. I wish it were different.  But leadership is about taking responsibility for your actions and moving forward.”

While living in New York, Stemerman was a registered Democrat, from 1996 to 2003.

Stemerman gave $2,300 in 2007 to Barack Obama’s first campaign for president and $250 to a Democrat running for Congress in New Mexico in 2000. But the rest of the $40,750 in contributions attributed to Stemerman in Federal Election Commission records went to Republicans, including Mitt Romney’s run against Obama in 2012.

In 2012, Stemerman also gave $100,000 to American Crossroads, the conservative Republican Super PAC run by Karl Rove. One of Stemerman’s other beneficiaries that year was the congressional campaign of Steve Obsitnik, now one of the five Republicans still competing for governor.

His campaign said Wednesday that, despite his past contributions and party affiliation, Stemerman is well-justified in criticizing Stefanowski over the issue of voting and party fealty.

“The contrast in this race could not be more clear — David has been a registered Republican for over 15 years and has donated tens of thousands of dollars to Republican candidates and conservative organizations over that same period of time,” said Albert Eisenberg, a spokesman for Stemerman. “Bob Stefanowski not only didn’t vote over 15 years or support our last three Republican presidential nominees, but he was a registered Democrat who donated to fellow Democrats right up until he decided to run for governor last year.”