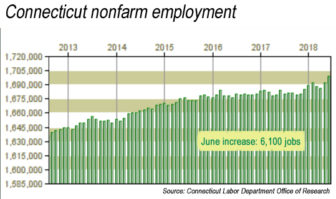 Connecticut’s unemployment rate improved slightly in June, dropping from 4.5 to 4.4 percent as the state gained 6,100 jobs, the Department of Labor reported Thursday.

“June’s increase of 6,100 jobs overcame the entire decline we saw in March and April,” said Andy Condon, Director of the Office of Research within the labor department. “Our three month average job growth has once again turned positive.”

But Condon also was cautious.

“The seasonally adjusted year-over-year job gain of nearly 15,000 jobs is very encouraging, but this number can be volatile,” he added. “Our average annual gain for the last 12 months is 5,300, still ahead of last year’s pace. Construction and manufacturing are now the fastest growing sectors in the state’s labor market — a very good sign.”

Private-sector employment grew by 7,600 jobs in May, while the public sector lost 1,500 positions. The public sector includes not only federal, state and municipal employment, but also jobs at the two tribal casinos in southeastern Connecticut.

Connecticut now has recovered just under 88 percent, or 104,600 of the 119,100 jobs it lost during the last recession in 2008 and 2009. The private sector has fully recovered, and employment there represents 111.2 percent of the positions lost during the recession.

Seven of the 10 major industry super-sectors gained employment in June, led by the leisure and hospitality super-sector, which added 2,400 positions. Gains also were recorded in: education and health services; construction and mining; professional and business; manufacturing; financial activities; and information.

Losses were recorded in: trade, transportation and utilities; government; and other services.

“Our efforts to create jobs and economic opportunities are working,” Gov. Dannel P. Malloy said Thursday. “Over the past two months, Connecticut has added more than 12,000 jobs. In particular, our manufacturing sector – which has been a central focus of my administration – continues to make substantial gains as we have simultaneously reduced the size of government.”

“We had a very strong jobs report last June, but then we saw big losses in the second part of the year,” Gioia said. Other concerns include the shrinking labor force, which will put pressure on the state’s ability to sustain job growth, he said.

The Hartford labor market added the most jobs in June, up 2,800, while gains also were recorded in the Bridgeport-Stamford-Norwalk and Norwich-New London-Westerly markets. The New Haven and Danbury markets recorded small declines of 400 and 100 jobs, respectively, while the Waterbury market was unchanged.