The airwaves get hot in the Republican race for governor 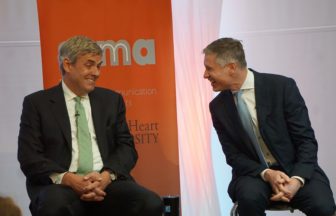 The Republican primary for governor is coming to a boil as David Stemerman and Bob Stefanowski, whose seven-figure advertising budgets give them the loudest voices in the five-way contest, redouble attacks begun at a debate this week with harsh new television commercials.

Stemerman is dubbing Stefanowski as “Payday Bob,” a cutting reference to his three years as the chief executive officer of DFC Global, a London-based financial services company that provides short-term unsecured financing in the U.S. through pay day loans and pawn broker shops.

His new ad suggests that Stefanowski was CEO when the company ran afoul of regulators, though he took the job in 2014 after most, if not all, of the issues that drew regulatory actions against DFC. Stefanowski said he was brought in to end abusive practices and ensure the company’s compliance with consumer laws in the U.S. and U.K,

“DFC Global was a failing company that was engaged in questionable practices before I took over,” Stefanowski said. “I was hired to turn it around because of my track record for integrity and compliance. I fired 20 of the top 30 executives, took immediate actions to improve controls and treat customers fairly. I’m proud of the work I did at DFC.

“For months, Bob has been misleading voters in Connecticut about his business record.  Bob has failed to tell voters that his most recent job was running a payday lending company, DFC Global, that engaged in lending practices that are illegal in the state of Connecticut. DFC was fined millions of dollars for making loans its customers had no ability to repay,” said Patrick Sweeney, manager of Stemerman’s campaign.

DFC was not penalized for any business practices in Connecticut.

Stefanowski’s ad labels Stemerman as “liberal Dave Stemerman,” and references his past as a registered Democrat in New York.

“Stemerman donated to Obama and Stemerman wants to keep Dan Malloy’s income tax,” the ad continues. “What a hypocrite.”

How Stemerman is a liberal is unexplained, and “Dan Malloy’s income tax” is a non-sequitur. The tax, which was passed in 1991 during the administration of Gov. Lowell P. Weicker Jr., a Republican-turned-independent, is no more Malloy’s than it was John G. Rowland’s or M. Jodi Rell’s. Neither of those Republican governors moved to repeal it, and it increased sharply under Rell.

Stemerman, who made a fortune managing a hedge fund, and Stefanowski are largely self-funding their campaigns. Stemerman already has spent $4 million, more than half on television and digital advertising. Stefanowski has spent $1.88 million, including $1 million on television.

The other candidates competing for the nomination — Mark Boughton, Timothy Herbst and Steve Obsitnik — are participating in the state’s voluntary public financing program, which limits them to a primary budget  of about $1.6 million, including a $1.35 million grant.