From the state's lawsuit.

You probably never heard his name before today, but Cody Wilson emerged this week as an influence in the Connecticut primaries for governor and attorney general: He is a self-described “crypto-anarchist” from Texas who wants to sell America a downloadable blueprint for the 3D printing of untraceable plastic firearms.

In a state where there seemed to be no more frontiers in the world of gun control, Wilson has enabled Democrats to go on the offensive on guns — and even enticed Susan Hatfield, a Republican candidate for attorney general backed by the state’s largest gun-owners’ group, to endorse legal action to stop him.

Guns and Donald J. Trump are the ultimate wedge issues for Democrats, and Cody Wilson’s 3D-printed gun has tied them into one neat package. The Obama administration used laws banning the foreign distribution of firearms to stop Wilson from posting the blueprints on the web, but the Trump administration lifted the ban last month.

“The Trump administration reached a settlement with a company that would have allowed 3D printing and laser printing produced guns that violate our gun safety laws right here in the state of Connecticut,” said Ned Lamont, the party-endorsed Democratic candidate for governor. “So, this is why you want to have a governor, you want to have a state that can stand up and be a firewall for these types of assaults upon our laws and our liberties.”

Lamont spoke Wednesday at the Hartford Public Library, standing by a 3D printer with two other endorsed Democrats facing primaries: William Tong for attorney general and Shawn Wooden for state treasurer. Tong and his two rivals for the nomination, Chris Mattei and Paul Doyle, already had made fighting Trump and the NRA central to their campaigns. 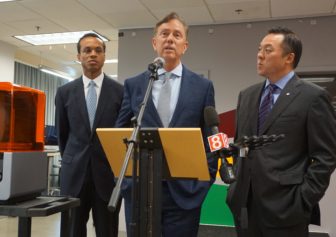 Connecticut is one of eight states that filed suit in federal court against the Trump administration over its action, accusing it of making “an under-the-radar settlement” with Wilson’s company, Defense Distributed. The company had been planning to post the blueprints Wednesday until a federal judge granted the states’ motion for a temporary injunction.

Wooden, who lost a cousin to gun violence, briefly choked with emotion Wednesday when answering a question about where he, Tong and Lamont think the issue ranks in the interest of voters based their interactions with voters and polling.

“This issue is bigger than polling and poll numbers,” said Wooden, a lawyer and former Hartford city council president. His voice catching, he added, “Even though we’re in a political season, let’s not reduce gun violence to poll numbers. Let’s not do that.”

Tong, a state representative from Stamford, is the co-chair of the legislature’s Judiciary Committee, as is one of his competitors, Sen. Paul Doyle of Wethersfield. Doyle had called for Connecticut’s intervention in the case. In a Democratic primary, running against the NRA is good politics.

Talking about his tenure as co-chair of Judiciary, Tong said, “It’s part of my job every year to go to war with the NRA.”

The legislature passed a law this year banning bump stocks, the accessory used by the Las Vegas mass shooter that effectively turned semiautomatic rifles into machine guns. But legislation addressing 3D-printed firearms and “ghost guns,” firearms that can be assembled from mail-order kits, never came to a vote.

Lamont said he would press for the legislation next year if elected.

In addition to 3D-printed plastic guns and parts to build AR-15s, the states’ lawsuit says, Wilson was ready to offer blueprints for the “Ghost Gunner,” a computer-aided process for milling gun parts from aluminum. The lawsuit quotes Wilson as saying, “The internet will serve guns, the gun is downloadable . . . No amount of petitions or die-ins or anything else can change that.”

The issue of 3D-printed guns is a delicate one for Republicans. In a crowded primary like the five-way contest for the GOP gubernatorial nomination, gun owners are seen by several campaigns as an important, if not potentially decisive, demographic.

Timothy Herbst and Bob Stefanowski, two of the GOP’s gubernatorial contenders, quickly publicized the NRA giving them its highest grade. Herbst also is endorsed by the Connecticut Citizens Defense League, the state’s biggest gun-owners’ group. Both say they would oppose further gun-control laws in Connecticut.

But in a tweet Tuesday morning, Trump seemed to have second thoughts about his administration’s action: “I am looking into 3-D Plastic Guns being sold to the public. Already spoke to the NRA, doesn’t seem to make much sense.”

Hatfield, a Trump delegate to the Republican National Convention and the GOP-endorsed candidate for attorney general, seized on Trump’s tweet, saying the issue is not a partisan one.

“3D-printed firearms are not only unnecessary but will make our communities and state less safe,” Hatfield said in a statement. “Preventing 3D-printed firearms shouldn’t be a political issue and instead of politicians trying to divide us we should work together to find a way to stop criminals, gangs, and terrorist from getting the blueprints to print 3D-printed firearms.”

Hatfield said she agreed with Jepsen’s decision to join the lawsuit and urged Trump to take steps towards reinstituting a national ban. She blamed Tong and Doyle for the failure of the ghost-gun legislation and said, “I will do what they couldn’t do as legislators and keep our communities safe.”

Stefanowski did not answer when asked his position on 3D-printed guns.

Instead, he said in a text message: “I was honored to have received the highest rating possible from the NRA. Protecting our children and the hard working people of Connecticut is of the utmost importance. But our focus needs to be on mental health and keeping guns out of the hands of people who should not have them; not on persecuting law abiding gun owners like Governor Malloy has for the past eight years.”