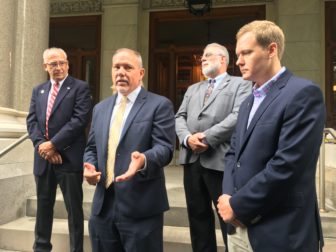 Connecticut House Democrats filed a complaint with the State Elections Enforcement Commission on Wednesday against a nationally Republican funded Super PAC they say violated reporting requirements while targeting state Democratic legislators ahead of the 2018 election.

The PAC is funded by the Washington D.C.-based Republican State Leadership Committee, a 527 group comprising of major corporate and conservative donors like Koch Industries and Wal-Mart. Change Connecticut reported contributions by RSLC of $400,000, and its treasurer, William Phillips, of $500.

The lawmakers said Change Connecticut paid Washington D.C.-based Percipient Strategies for research dossiers on them the day before filing a required 24-hour independent expenditure report on June 30. But the House Democrats charged the company with starting its research at least three weeks earlier when it made public records requests to local police departments, town halls, and registrars of voters.

Aresimowicz said the group also violated state election laws by not disclosing who it is targeting or helping in its report.

“They have yet to declare who they’re benefiting,” Aresimowicz said. “This flies in the face of what we expect here in the state of Connecticut.”

The PAC has not seen a copy of the complaint, according Change Connecticut spokesman Ben Davol.

“We contacted elections enforcement and as of now have not heard back,” Davol said in an email. “Once we review the complaint, we can better answer any alleged violation.”

Linehan questioned what the group is interested in finding, noting it looked for 20 years of police records with her name on it. Aresimowicz said Berlin received freedom of information requests asking for his voting history on the town council and police responses to his home, among other things.

In 2016, the RSLC donated $350,000 to Grow Connecticut to target state legislative races through television and digital ads that boosted Republicans and attacked Democrats.

“What we’re complaining about is these outside groups in D.C. (that are) funded by very conservative think-tanks … and others are putting money in and spending it in Connecticut and not complying with our statutory scheme for clean elections,” Ritter said.