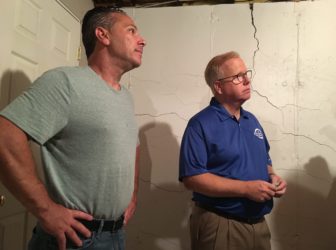 Willington — Republican gubernatorial contender Mark Boughton on Friday visited one of thousands of Connecticut homes whose concrete foundations are crumbling  beneath them, making the pitch that if elected, he would tackle the slow-motion disaster by initially taking the insurance companies to task.

As he toured the Willington home of Tim Heim, Boughton, as other officials have in the past, called on insurance companies to cover the damage affecting an estimated 30,000 homes in eastern and central Connecticut.

Those houses are contaminated with aggregate from a Willington quarry containing pyrrhotite, a mineral that causes massive cracking in foundation concrete when exposed to water. Residents coping with the issue are consequently facing not only the loss of their home’s value and life’s investment, but emotional turmoil as well. Their communities, likewise, are seeing a big loss in taxable property values.

“I would give you my right hand today, take me off this emotional rollercoaster tomorrow— because nobody has any idea what torture this does to a family’s life,” Heim said. Boughton, mayor of Danbury, was there with a group of fellow Republicans: Vernon Mayor Daniel Champagne, Rep. Tom Delnicki, R-South Windsor, and Republican Rep. Chris Davis of Ellington. 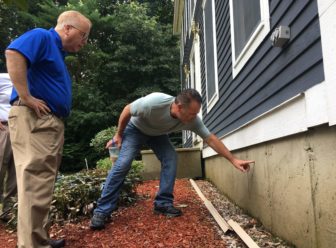 Heim, 49, showed Boughton cracks along the outside of his home and in his basement and said he thinks the state should develop a standard for how much pyrrhotite is too much.

“First move would be to pull the insurance companies in and say you’re going to have to do the right thing here,” Boughton said. The Danbury mayor noted that the state and federal government should also assist residents, but that insurance companies cannot walk away from the problem.

“These people have faithfully and loyally been paying their homeowners policy for decades and now are being stuck with a house that’s essentially worthless,” Boughton said. “That’s what insurance is for.”

The candidate is not the first person to want to hold insurance companies accountable, however. A bill that would have done so was voted down in legislative committee last April, facing opposition from the industry.

“We have enormous sympathy for the homeowners affected by the crumbling foundations problem, but typical homeowners insurance is designed to cover sudden, accidental losses, not the slow deterioration of foundations,” the Insurance Association of Connecticut said in a statement Friday. They have also asserted that responding to the problem would drive up home insurance premiums throughout the entire state.

Boughton is not the only contender for statewide office addressing the crumbling foundation issue, either. State Sen. Paul Doyle, Democratic candidate for state attorney general, is petitioning the State Supreme Court for permission to file a “friend-of-the-court” brief in a lawsuit arguing that the insurance companies should be required to pay. He was one of the sponsors of the legislation that failed in April. 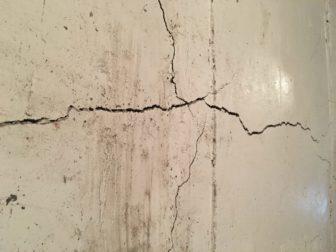 One of many cracks caused by the tainted concrete

In May, the General Assembly voted to impose a $12 surcharge on homeowners’ insurance policies, contributing about $9.3 million yearly to a relief fund for residents facing complicated repairs costing as much as $250,000.

The Insurance Association of Connecticut said that surcharge along with $100 million state allocated bond money show the recent progress on the issue and will provide significant support to affected homeowners.

But Boughton said the surcharge is not the answer and the easier way to solve the issue would be to hold insurance companies accountable. Asked whether that is a realistic solution, he had this to say:

“In my experience in this kind of stuff, we file a suit, they say no way, we end up sitting down and talking about it and say, okay, what are you really willing to come to us with a solution for this?”

“They have the largest balance sheet. They are the largest fish in the pond. They’ve got to step up to the plate with some meaningful dollars to be able to get these things fixed … pay for the cost of the foundations and the homeowner picks up the landscaping and other things. There’s got to be a middle ground here.”

“When you see this, you now know that this is catastrophic for this house and for many homeowners in the top tier of the state, so we have to do something, it’s that simple,” Boughton said.

Beyond that, the Danbury mayor said forming collaboration with Massachusetts, which is also experiencing crumbling foundations, would also be important