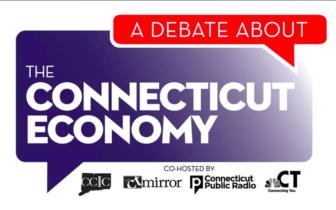 If you want to see the five Republican gubernatorial candidates in more than the 30-second commercials now filling the airwaves, there are two more chances — a 90-minute debate tonight at 7 p.m. at Fairfield University and one Wednesday afternoon on WFSB, Channel 3.

Limited tickets are available for the debate at Fairfield, which is sponsored by the Connecticut Conference of Independent Colleges, CT Mirror, Connecticut Public Radio and NBC Connecticut. To watch it live streamed on Facebook, click here.  The Connecticut primary for Republicans and Democrats is Aug. 14.

All five Republicans are participating tonight in a debate that focuses on the economy: Danbury Mayor Mark Boughton, the party-endorsed candidate; Timothy Herbst, the former first selectman of Trumbull; Steve Obsitnik of Westport, a tech entrepreneur; Bob Stefanowski of Madison, a former corporate executive; and David Stemerman of Greenwich, hedge-fund founder.

The ads have given a glimpse into the shifting fortunes of the candidates, at least as seen by the campaigns and their media buyers. Stefanowski was the primary target of early commercials. More recently, Boughton seems to be the most popular target, with Stemerman and Herbst also taking hits.

Collectively there has been nearly $7 million spent on television and radio time, including about $1.5 million by the Republican Governors Association to reserve television time for the general election this fall, and about $1 million spent by the two Democrats, Ned Lamont and Joseph P. Ganim.

According to the most recent campaign finance filings, the two biggest spenders have been Stemerman and Stefanowski. Each are running for office for the first time, and they have spent generously on ads to give them name recognition and, more recently, to attack their rivals.

Stemerman, who is self-funding his campaign with a $10 million loan, has spent nearly $5.5 million, including more than $2 million on commercials on broadcast television in Connecticut and New York, cable television and radio. He is the only candidate to buy time on New York stations, an expensive way to reach Fairfield County voters.

Stefanowski, who has loaned or given his campaign $2.3 million of the $2.9 million he’s raised, has spent at least $1.3 million on television.

The other three Republicans are on a budget. They are participating in the voluntary Citizens’ Election Program, which provides public financing of $1.35 million for a gubernatorial primary, while imposing spending limits. As of Aug. 1, they had spent about $ 1 million, with their television buys ranging from about $500,000 for Obsitnik to $680,000 for Herbst.

The proposal would include the automatic erasure of most misdemeanors and certain felonies after a person stays conviction-free for roughly seven years.

Brave but hopeful, deported but determined — and still optimistic

I just got a call from a Salvadoran migrant I met almost a year ago when I spent 10 days on the Arizona/Sonora border with nine other women from Connecticut. We learned a lot about the situation of migrants on both sides of the border and volunteered at a shelter in Tucson where up to 300 migrants – parents with children – stayed briefly before moving on to their sponsors across the country.

Tips to stave off armageddon (if you are a billionaire)

Recently, some smart observers of our economy have realized that our system is broken. These voices point out that the gap between rich and poor has grown too wide, and most people have not seen real income growth in decades. They denounce that the economy is rigged against working families. They point out that our education and health system are grossly unfair, driving growing unrest. The tax system and the prison system drive growing inequality, with political deadlock only making it worse.