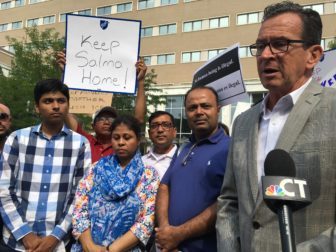 Gov. Dannel P. Malloy rallied Tuesday with other public officials, advocates and demonstrators against the planned deportation of a Bangladeshi immigrant whose only child will soon be the first in her family to pursue a college education.

The protesters outside the U.S. Immigration and Customs Enforcement offices in Hartford stood closely alongside Salma Sikandar, her husband, Anwar Mahmud, and their 17-year-old son, Samir Mahmud as speakers called for ICE to halt her deportation order.

“These are good people, hardworking people, respected people in their community,” Malloy said to the crowd. “Their son is a wonderful American citizen about to start college here in Connecticut … There is no reason for this deportation to take place at this time with the challenges that this family is currently facing, with the track record that this family represents.”

Sikandar, who came to the U.S. in 1999 and overstayed her visa, was recently notified by ICE she must leave the country by Aug. 23 and return to Bangladesh. The 48-year-old Bangladeshi immigrant is currently wearing an ankle monitor and reporting to ICE for regular check-ins.

Robert Wang, the couple’s attorney, said multiple appeal attempts were rejected by the Board of Immigration Appeals and the Second Circuit Court of Appeals over several years. Sikandar is now waiting for the BIA to rule on a motion to reopen her case and another to grant her an emergency stay of removal, Wang said.

ICE is closely monitoring that appeal to determine the appropriate next steps, according to department officials. 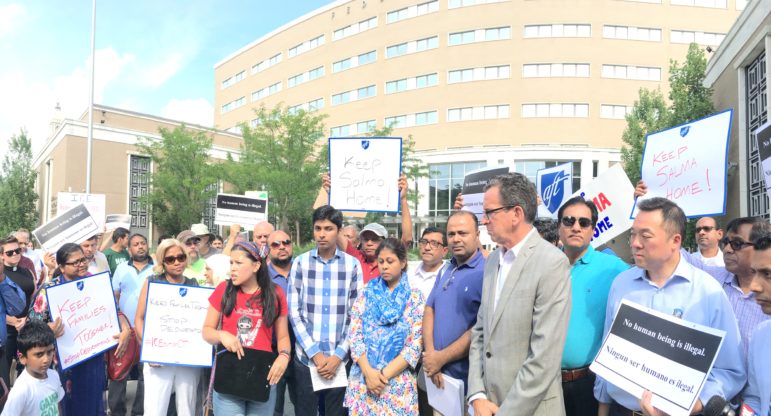 The family from New Haven repeatedly wiped their eyes as they spoke amid supporters holding signs that read “Keep Salma Home!” and “No Human Being is Illegal.”

“She means everything to me. I’m going to be a first-generation college student and then three days after she’s supposed to be deported,” Samir Mahmud said. “Her lifelong dream was to see me go to college and she might not be able to see that.”

Samir, who graduated from Engineering and Science University Magnet School, is set to attend Quinnipiac University at the end of August.

Rep. William Tong, D-Stamford, reminded the crowd his father also overstayed his tourist visa almost 50 years ago but was able to stay. The Democratic endorsed candidate for state attorney general said “I want people to understand there’s no daylight between us,” or any difference between them and other families.

After Sikandar’s asylum application was denied in 2011, she appealed for a cancelation of removal due to an exceptional hardship involving her son’s asthma and his potential loss of a U.S. education. But Wang said Hartford Immigration Court Judge Michael W. Straus denied the motion after finding that hardship wasn’t enough.

State Rep. David Yaccarino, R-North Haven, said he wasn’t able to attend the rally but said he talks to Anwar Mahmud every day.

Yaccarino, who has offices across the street from the McDonald’s restaurant where Mahmud works, said he started helping the couple on their immigration case two and half years ago and has recently been in contact with ICE officials to try to help extend Sikandar’s stay.

“I am of the belief if you have a problem, and you are a legislative official and you have the authority and the means to craft legislation —do it,” Yaccarino said. “We need a real immigration policy and we don’t have one.” 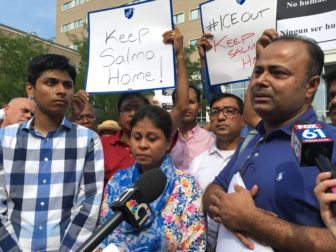 From right, Anwar Mahmud speaks alongside his wife Salma Sikandar and their son Samir Mahmud at a rally Tuesday.

Mahmud, who will have a July 2019 court hearing, is seeking asylum for becoming a Mormon — something that could put his life in jeopardy in Bangladesh. He has been fighting for his wife’s right to stay for the last 19 years and hopes his family will stay together.

“We are not criminals, the last 25 years I [have been] paying my taxes. I have a work permit. She has a work permit … We are good citizens,” Mahmud said.

“I am going to fight, I never stop fighting … I have no second option, I need my family to be with me,” Mahmud said.