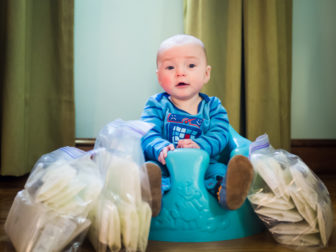 The Mothers’ Milk Bank Northeast serves premature infants in over 85 hospitals and outpatient facilities across the northeast.

John Dempsey Hospital will open the first human milk depot in the Greater Hartford region on Aug. 30, giving moms with an oversupply of breast milk a local place to donate.

“The goal is to increase the number of donors throughout the community,” said Marisa Merlo, lactation consultant for UConn Health’s Department of Obstetrics and Gynecology. “Every mom has an option to ship milk themselves” to a facility in Massachusetts, she said, “but UConn wanted to create a depot to allow the mothers in the greater Hartford area to just drop off their milk.”

The donated milk will then all be shipped by Merlo to the Mother’s Milk Bank Northeast facility in Newton, Mass., where it is mixed, pasteurized and redistributed to over 85 hospitals and outpatient facilities across the northeast, including UConn Health, to support premature infants.

Human breast milk is the best option for premature infants, many of whom are at risk of necrotizing enterocolitis (NEC) which can lead to emergency surgery and lifelong digestive complications, said Ann Marie Lindquist, director of community relations for Mothers’ Milk Bank Northeast.

“The benefits are tremendous in everything including feeding, feeding tolerance and for growth,” said Rachel Drake, a pediatric registered dietitian and the president-elect for the Connecticut Academy of Nutrition and Dietetics. “There are better neurological outcomes, lower rates of infection and shorter time until discharge.”

Mothers of premature infants are often unable to produce adequate amounts of breast milk for their child, and that’s where donor milk comes in. 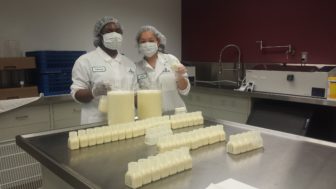 “It is the next safest alternative because many of these babies can not tolerate formula which is made from cow’s milk,” Lindquist said. The Centers for Disease Control, World Health Organization, and American Academy of Pediatrics guidelines all support the use of donor milk before infant formula if possible.

The UConn Health milk depot will be the fifth donation facility in the state, but the first located at a hospital. The other four are located in Guilford, Danbury, New London and Norwich.

Despite the United States refusal to back the World Health Organization’s promotion of breastfeeding and some peoples’ concerns about the safety of donor milk, it is becoming more accepted by healthcare professionals and the public, Drake said. In order to donate, women must go through a screening process which includes a blood test for HIV, Hepititis B and C and syphilis – diseases that can all be transmitted via breast milk.

“It is viewed the same as a blood transfusion,” Merlo said. “And the Mother’s Milk Bank Northeast has never had a case of something being contracted via donor milk.”

Medical facilities across the northeast are seeing an increase in donor breast milk for hospitalized infants.

“It is absolutely a trend that more and more units are getting it at least for preterm units,” Drake said.

Merlo wants to make it as easy as possible for donors at the new UConn milk depot. 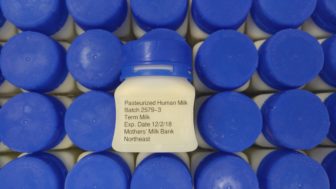 All donor milk is pasteurized at the Mothers’ Milk Bank Northeast facility before being shipped out.

“A lot of moms who are donating milk have newborns or infants. I will meet them in their car and take their milk without them even needing to park,” Merlo said. “I want to make it as convenient as possible.”

Donating breast milk is not only beneficial for the infants, but rewarding for the women with over supplies and for those who have lost a child during birth or shortly after.

“For some women in bereavement, it helps them with the grieving process,” Merlo said. “They can donate any milk that they have in memory of their infant who has passed.”

Natalee Martin, the current Associate Director of Development at UConn Health who brought the ideas of a milk depot to UConn, first got involved in the effort to provide preterm infants with breast milk when she was a donor herself after she gave birth to her second daughter.

“I waited until I was done pumping for my daughter when she was a year old and then I pumped for another three months,” Martin said. In total Martin donated 150 ounces of milk, the minimum required donation per shipment for mothers. Every ounce of breast milk can provide up to three meals for a premature infant. “Any mom who has the oversupply and is able to do it should., It is really an incredible gift.”

There is already a lot of interest amongst other local mothers in donating, Merlo and Martin said.

“We have two to five moms bringing milk on our opening day, and that is really promising” Martin said.

The new milk depot was made possible by donations from those directly involved: Merlo, Martin, an obstetrician/gynecologist at UConn Health Dr. Christopher Morosky and Carrie Ferrindino, the nurse manager for maternal child health in addition to patients and former patients who all made generous donations.