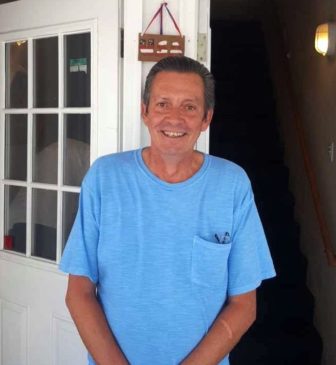 Military veteran Harrison shares a second-floor apartment in housing managed by the Homeless Hospitality Center of New London. Earlier this year, he was taken in at a respite care program of the center while recovering from hospitalization..

Last year Ed Harrison had hip replacement surgery, and before long he was walking on his left leg again. Then all of a sudden he wasn’t. Harrison fell and broke his leg in two places and wound up back in the hospital, then in a Groton nursing home and rehab center for recovery.

When his treatment there ended, the 59-year-old U.S. Navy veteran, who served during the Desert Storm era of the 1990s, had no home to return to.

He took advantage of the “respite” care that the Homeless Hospitality Center in New London offers to those without a home who have left a medical facility and require continuing care that typically would be provided by a visiting nurse, spouse or other family member.

Maintaining a 40-bed shelter that includes seven “respite” beds, the Center, established in 2006, has a dozen employees and serves more than 600 clients annually, executive director Cathy Zall said. Funding through a grant from the state Department of Housing pays 20 percent of the facility’s budget.

Zall said the center is fortunate that private funding has grown in recent years, because the state contribution has fallen to $94,000 from about $100,000 five years ago. Staff earn modest wages, ranging from $13 to $18 per hour.

Clients who are chronically homeless or struggle with mental health or addiction issues make up about 30 percent of the clientele, Zall said. “Now about 70 percent are people who were never homeless before and probably never will be again,” she said, “but they’ve lost a job or seen a relationship break up so they had to leave where they were living.”

Harrison stayed three months at the main shelter, but as a military veteran he qualified for admission to a longer-term accommodation in a building on Mountain Avenue, where only qualified veterans are admitted. He shares a second-floor apartment with a roommate.

“It’s like night and day – it’s so much better here,” he said. Twice a day, a bus takes residents to a local soup kitchen. Staff at the center have helped him apply for food stamps – the Supplemental Nutrition Assistance Program known as SNAP – and Social Security Disability Benefits.

Case worker Mirca Reyes, herself a disabled veteran, said the center is moving to add five more beds specifically for homeless veterans by this fall.

How to stop squeezing nonprofits and their clients

The task for caring for society's most vulnerable citizens was first taken on by churches, then by towns, and now primarily by the state. So how can the state maintain its commitment to those with developmental disabilities, mental health or addiction issues and other conditions in difficult budgetary times? There are ideas out there...

Twenty-seven-year-old Dan Fiorentino has a job, a supportive family and a passion for the Boston Red Sox. But because he has Down Syndrome, there’s no telling when he’ll be able to live on his own.

At a workplace where employees haven't had a raise in a decade, retaining staff who have been carefully trained, and who have forged trust relationships with clients, is a persistent concern.

Oak Hill, Inc., the largest nonprofit provider of human services for the state, recently trained two group home workers, only to see them jump to the competition earlier this year. The competition is the state.

Budget cuts, programs ended, and ‘We went off the cliff’

In June 2017 spending cuts ordered by the state in coping with its budget crisis closed many day programs for developmentally disabled clients. For Sarah Reith, who has autism and Down Syndrome, it meant the loss of a routine that kept her feeling happy and safe.