Hayes, Glassman, other pols search for votes at Newtown rally 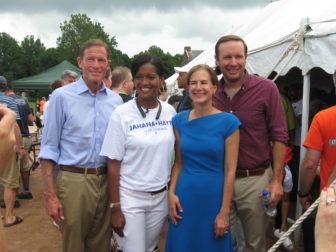 Newtown – In the homestretch of primary races, Sunday’s March for Our Lives rally was the place to be for Democratic candidates hoping to round up last-minute votes and extol voters to show up at the polls on Tuesday.

The rally drew a couple of thousand people eager to hear Parkland, Fla. school shooting survivors, family members of the Sandy Hook Elementary School victims, and other gun control advocates as they decried an increasing number of massacres.

It also drew political candidates who were eager to press the flesh of likely voters.

Susan Bysiewicz, who is running for lieutenant governor, called the rally, an “A list event” for Democratic candidates and other political hopefuls.

“It is a couple of days before the primary. That’s not lost on us,” Bysiewicz said.

Bysiewicz is in a tight race against fellow Democrat Eva Bermudez Zimmerman.

That said, Bysiewicz said her main motivation in attending the rally, held on the grounds of the former state psychiatric hospital Fairfield Hills, was to show support for a movement that she said “is important, not just to Connecticut, but to the entire country.”

Volunteers and campaign workers for Jahana Hayes and Mary Glassman, two Democrats who are vying to fill retiring Rep. Elizabeth Esty’s seat in Congress, milled through a crowd that contained many people bearing stickers proclaiming them to be on either “Team Hayes” or “Team Glassman.”

The candidates braved the sticky heat to corral prospective voters. 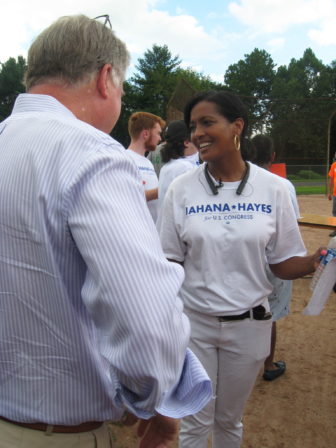 Jahana Hayes at Sunday’s rally in Newtown for gun control.

“I’m a teacher and a mother and even if I weren’t running, I’d still be here” Hayes said.

She said her goal in the 48 hours or so remaining before the polls close Tuesday is to introduce herself to as many potential voters as possible.

“I’m going all over (the district),” Hayes said.

That’s a challenge because of the sheer size of the 5th Congressional district, which stretches from Meriden and New Britain in Central Connecticut westward to Danbury. It includes the Housatonic Valley, the Farmington Valley, the Upper Naugatuck River Valley and Litchfield Hills.

Mary Glassman, who will compete against Hayes in Tuesday’s primary, said her stop in Newtown is the 30th in a campaign to visit all 41 towns in the district by Election Day.

But Glassman said the stop at the March for Our Lives rally was special, both because of the tragedy that claimed the lives of 20 first graders and six Sandy Hook Elementary School employees, but also because as a former Simsbury first selectman, she is a neighbor.

She said she’d be “honored” to be a part of the effort to change federal gun laws in Congress.

“You can change lives by changing laws,” she said. 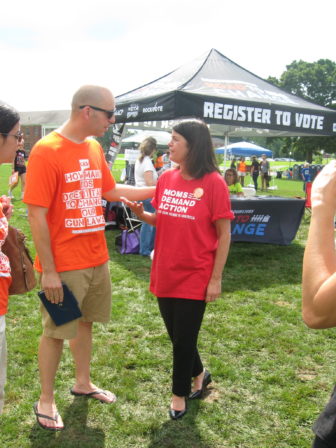 Mary Glassman greets a potential voter at the rally.

Glassman also said her experience as first selectman gives her the experience “to negotiate good for the people you represent.”

Hayes, a former national Teacher of the Year from Waterbury, has no political experience. But she has a compelling personal story, having lifted herself out of poverty by sheer will and the determination to achieve academic excellence.

Hayes also has an important mentor, U.S. Sen. Chris Murphy, who is running for re-election this year and also showed up at the rally to protest congressional inaction in tightening federal gun laws.

U.S. Sen. Richard Blumenthal, who is not up for re-election this year, was also there.

The senators attracted potential voters and media attention, and also a few people who can’t vote for them – parents of children slain at Marjorie Stoneman Douglass High School on Valentine Day.

Fred Guttenberg, who lost his 14-year-old daughter Jaime in the massacre, thanked the senators for supporting stronger federal gun laws and said more should be be done to prod the GOP-controlled Congress to approve them.

“I went from being non-partisan in this process to knowing I had to take a stand,” Guttenberg said.