Feds give Connecticut $10.6 million for districts with displaced students 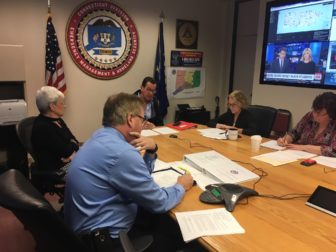 Office of the governor

Gov. Dannel P. Malloy and Lt. Gov. Nancy Wyman, left, met with state officials at the State Armory in Hartford as they planned for an influx of victims of Hurricane Maria.

The U.S. Department of Education has announced it will give Connecticut $10.6 million for school districts that took in displaced students from Puerto Rico and the U.S. Virgin Islands after Hurricane Maria wreaked widespread devastation last fall.

That funding is part of a roughly $359.8 million federal assistance pool the federal agency will give to 20 states and the U.S. Virgin Islands to aid with educating students displaced by Hurricanes Harvey, Irma, Maria, or wildfires in California last year.

The Connecticut Department of Education counted a total of 1,734 displaced students remaining in the state on June 1, according to DOE spokesman Peter Yazbak. Yazbak said that number has dropped since the winter, with some students moving back to Puerto Rico or out of state.

Yazbak said the funding allocated on Tuesday will reimburse those Connecticut school districts that incurred additional costs when taking in the unexpected enrollees. The department is now in the process of notifying districts that will receive the funding, Yazbak added.

The grant notice came on the same day Puerto Rico Power Authority, the island’s government-owned electric utility company, announced it officially restored power to the entire island—almost a year after it lost electricity during Hurricane Maria.

The top six school districts that took in students after the hurricane were Hartford, Waterbury, New Britain, New Haven, Bridgeport, and Meriden. Districts will receive $10,000 for each student with a disability, $9,000 for those who are English learners, and $8,500 for other displaced students.

“This is what you count on the federal government to do,” Ritter said. “The first cost of storms is associated with where the storms occurred, but then there are also the spin off effects. We saw an influx of students come in from Puerto Rico and the U.S. Virgin Islands.”

Grants for states and the U.S. Virgin Islands