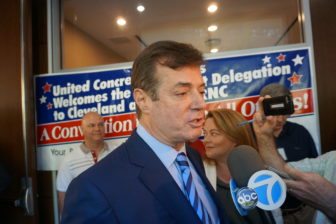 Washington – Connecticut’s Congressional delegation on Tuesday said the conviction of Paul Manafort, and the plea deal by Michael Cohen, President Donald Trump’s former personal attorney, is proof of “criminality” in the White House.

Blumenthal said “no one is above the law – not Paul Manafort and not his former boss, Donald Trump.”

“The Mueller legal team’s abundance of evidence was on full display in this first major test in the courtroom,” he added. “The Mueller team will now continue following the facts – and the money – as this investigation circles ever closer to the Oval Office.”

A Virginia jury on Tuesday convicted Manafort, Trump’s former campaign chairman and a New Britain native, on tax and bank fraud charges. The jury determined Manafort was guilty of eight of the 18 counts against him and said it was deadlocked on the other 10. U.S. District Court Judge T.S. Ellis declared a mistrial on those charges.

On the heels of the conviction, Rep. Jim Himes, D-4th District, tweeted “most productive witch hunt in history.”

The plea agreement does not call for Cohen to cooperate with federal prosecutors. But it also does not preclude him from providing information to Mueller, who is investigating the Trump campaign’s possible involvement in Russia’s interference in the 2016 elections.

Sen. Chris Murphy, D-Conn., tweeted, “this is getting really, really serious. It isn’t about politics or point scoring. It’s about the future of the American presidency. Protecting this institution is more important than protecting your political party.”

And Himes tweeted “the level of criminal activity around, and if Cohen is right, BY @realDonaldTrump should have every American, regardless of party, thinking about how we rebuild the standing and respect due the American presidency.”

Nick Balletto, the head of the Connecticut Democratic Party, said “today is a dark day for our country.”

“The confirmation that there were corrupt individuals working to elect President Trump is disturbing to Americans and more importantly to our democracy,” Ballettto said. “Paul Manafort and Michael Cohen were two of the President’s closest advisors, and the guilty pleas and verdicts are jarring and clearly indicative of the kind of campaign President Trump ran and the company he kept.”

Congressional Republicans decried the actions of Manafort and Cohen, but said they had nothing to do with Trump. They called for a quick end of Mueller’s investigation.

“If Manafort and Cohen did things that [they] shouldn’t have done, which it sounds like they did, I think they ought to be held responsible for it, but I don’t see any of this having anything to do with the President and Russia,” Texas Republican Sen. John Cornyn told reporters.

Sen. Lindsey Graham, R-S.C., said there weren’t “any charges or convictions for colluding with the Russian government by any member of the Trump campaign in the 2016 election.”