Washington – There’s a photo of Air Force Sgt. John Chapman holding a tiny Afghan girl on the wall of the concourse connecting the Legislative Office Building and State Capitol in Hartford.

The photo is there for two reasons — to honor Chapman, a native of Windsor Locks, as the first Connecticut casualty in Afghanistan and to recognize the way he died, sacrificing himself to save his teammates on a chilly mountaintop in 2002.

On Wednesday, President Donald Trump gave Chapman, who was 36 years old when he died, the nation’s highest military honor – the Medal of Honor.

Trump told those who attended the White House ceremony, mostly military officers and Chapman’s teammates and family members, that the fallen sergeant had always considered others before himself. The president gave as examples Chapman’s rushing to the aid of a bullied schoolmate and his yearbook inscriptions, which said “give of yourself before taking from others.”

“From a very young age, Chapman was determined to protect those in need,” Trump said.

Trump also said Chapman volunteered to fight in Afghanistan, walking into his superior’s office and saying, “I need to go.”

Trump presented the medal  to Chapman’s widow, Valerie Nessel, who held it triumphantly above her head.

“I know John would be extremely humbled,” Nessel said the evening before the ceremony. “He always put his mission and his teammates above himself.”

Chapman had been awarded the Air Force Cross, the top honor in the Air Force for his valor on Afghanistan’s Takur Ghar mountaintop on March 4, 2002.

He and other members of a special operations team were ambushed by machine gun fire and a rocket grenade, forcing their helicopter to make an emergency crash landing. One member of the team had fallen from the helicopter into enemy territory, and his teammates planned a dangerous rescue. Chapman deliberately ran into the open, and into enemy fire, to engage the enemy and help with the rescue.

Chapman was mortally wounded and his teammates left him for dead, but he continued fighting after regaining consciousness until he died on the mountaintop.
“John Chapman ran to charge up the hill and toward the enemy,” Trump said. “He really fought. We have proof of that.”

Chapman is credited with saving the lives of his teammates – six died, but 20 survived.  Several of the survivors attended the medal ceremony.

The full extent of Chapman’s sacrifice was not understood until the military was able to scrutinize the video of his last battle, frame by frame, thanks to new technology, said retired Col. Ken Rodriguez, Chapman’s commander and teammate.

“He continued to fight for an hour, he sacrificed his life,” Rodriguez said. “We put it all together and determined he clearly deserved a Medal of Honor.” 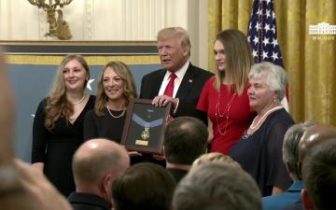 Senators Richard Blumenthal and Chris Murphy and Rep. John Larson, D-1st District, also attended the ceremony, getting a shout out from Trump.

The Connecticut congressional delegation pressed the Pentagon to give Chapman its highest honor and supported a provision in a defense bill last year that waived the statutory time limit for the Medal of Honor in certain cases, allowing Chapman to be honored 16 years after he died.

“I was humbled to attend this ceremony to honor Sergeant John Chapman, a son of Connecticut. What Sergeant Chapman did in the mountains of Afghanistan—fighting to his last breath, after being mortally wounded, to protect his fellow service members—is the exact type of extraordinary strength, service, and sacrifice worthy of the Medal of Honor,” Blumenthal said.

Murphy said “When Sergeant Chapman was called to duty, he didn’t hesitate to answer. He will forever be remembered for his heroic efforts in Afghanistan and his service to our nation.”

“He will never be forgotten, and we will continue to honor his legacy,” Malloy said.

Chapman’s family, including his two daughters Madison and Briana Chapman and his mother, Terry Chapman, were flown by the military to Washington for the ceremony.

When speaking of Chapman’s bravery and fighting abilities, Trump turned to the Madison and Briana and said, “good genes, you have good genes.”

Nessel said the honoring of their dad is a “bittersweet” experience for her daughters.