Democrats, labor use Trump and Stefanowski as motivation 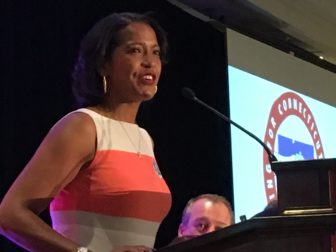 “This is an election that is black and white,” Democratic gubernatorial nominee Ned Lamont told the 124 delegates gathered at the Hartford Hilton for the third and final day of the Connecticut AFL-CIO’s biennial political convention. “Donald Trump has embraced my Republican opponent. Bob Stefanowski has embraced [Trump].”

Lamont charged the president is a threat to affordable health care, environmental standards, women’s rights to reproductive care, and gun control. “I know where Trump stands on this,” he said. “Where’s Bob? I haven’t seen him lately.”

Several candidates argued Friday that the federal income tax changes enacted last year by Republicans in Congress shift most relief to the wealthy, and Lamont said Stefanowski’s pledge to phase out the state income tax actually compounds that problem.

Stefanowski, formerly the chief financial officer of UBS Investment Bank and a senior executive at GE, has not offered details on how he would compensate for the loss of $9.7 billion in income tax receipts — which supports more than half of the General Fund. But he has said it would be phased out over eight years and accompanied by major reductions in state spending.

But much of the state budget is tied up in largely fixed costs involving retirement benefits, debt payments and Medicaid-funded programs. Lamont argued Stefanowski couldn’t eliminate the income tax.

“It would be a hole in our budget that would ransack state aid to (municipalities for) education,” Lamont said, adding that would drive up local property taxes. “The middle class has paid enough.”

The convention played a video of a Stefanowski speaking at a GOP candidate forum on July 16 in Southington during which he applauded the U.S. Supreme Court’s recent decision in Janus v. AFSCME, Council 31 — which frees non-union government workers from having to pay agency fees to unions.

“When I saw the decision come out I was clicking my heels three times,” Stefanowski said in the video. 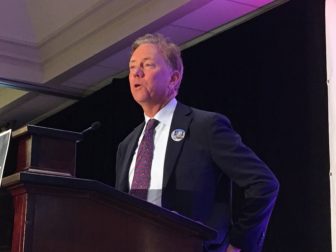 “We’re not going to get through this (state) budget crisis unless we deal with each other with respect,” Lamont added.

“Anybody who would not want your voice at the table or your presence in the room has nefarious intent,” Hayes said. “We have an administration that does not even value the work that we do.”

A former National Teacher of the Year, Hayes ran a strong grass-roots campaign based on a personal story that included growing up in Waterbury’s tough housing projects, experiencing homelessness, and becoming pregnant as a teen.

“I am you,” Hayes told the delegates. “You will be at the table with me. You will have a voice in this conversation.”

Democratic U.S. Sen. Chris Murphy, who backed Hayes during her primary campaign, said Friday that Trump and his allies pose a threat to more than just labor, and also are taking aim at the free press and “democracy in this country.” 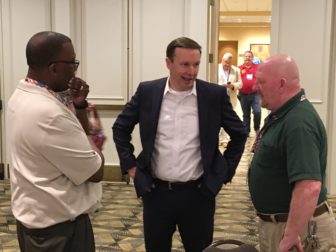 “All of that is on the ballot,” the senator said. “If we lose this election, then the wheels will come off.”

AFL-CIO delegates gathered Friday to complete a convention that — for the first time in its history — was held at three different time periods in the calendar year.

The convention opened in April to enable delegates to make endorsements before the political parties held nominating conventions in May.

The delegates reconvened in July to make additional endorsements before the August primaries. And Friday’s final meeting was held to make one final round as the campaign for the general election begins to heat up.

“We saw what happened in 2016 when people thought their vote didn’t matter,” AFL-CIO President Lori J. Pelletier said, referring to the election when Trump took the White House and Republicans made big gains in the state House and Senate.

The convention unanimously endorsed three Democratic candidates for statewide office on Friday, all by acclamation.