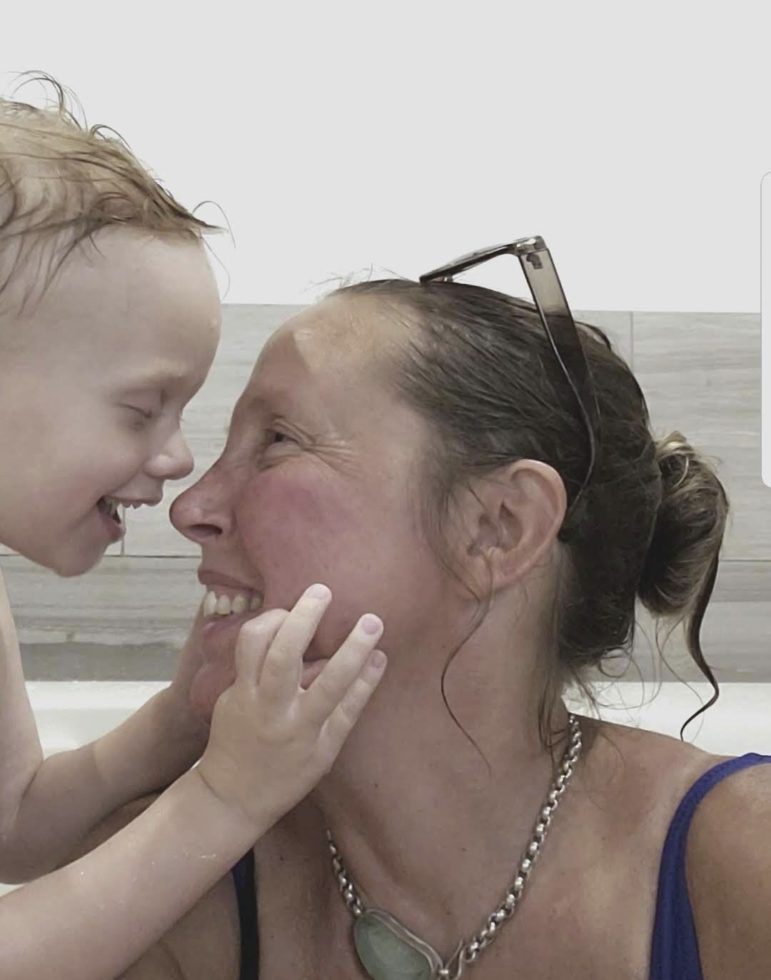 Elizabeth Yates of Stamford and her son, Tommy.

Each night, Elizabeth Yates helps her 2-year-old son Tommy brush his tiny teeth, reads him his favorite books, and then tucks the strawberry blonde toddler into bed.

Many nights, Yates has to later scoop her sleeping son out of bed, put him in his carseat, and drive him to his babysitter’s home. She does this because she has to go to work.

Yates, who lives in Stamford, works the overnight shift, 11 p.m. to 11 a.m., as a master control operator at a digital media company. She spends her work hours watching multiple screens to make sure different television networks are functioning properly.

And she always works overtime, bringing her typical work week to 60 hours.

“I try to load on as much overtime just to make ends meet,” said the 45-year-old single mom, who also supplements her groceries with free fruit and vegetables from a local food pantry and a monthly food truck. “Right now we’re just eeking by on a prayer … if we lost my overtime, I’d sink.”

Yates is hardly alone. In Connecticut, 538,529 households — 40 percent — could not afford basic needs such as housing, child care, food, transportation, health care, and technology in 2016, according to a new report released by The United Way of Connecticut.

Of that 40 percent, 10 percent lived in poverty and 30 percent were “ALICE” — meaning, above the poverty line but still not earning enough to cover the state’s high cost of living, according to the report.

ALICE is an acronym that stands for “Asset Limited, Income Constrained, Employed.”

“This ALICE report is one way to try to open people’s eyes to this daily struggle of so many people,” said Richard Porth, CEO of The United Way of Connecticut.

The report describes the cost of basic needs for each city and town in the state, as well as the number of households earning below this amount — the ALICE threshold — and focuses on how households have fared since the recession that ended in 2010.

For a single adult, the average ALICE threshold in the state was $24,672 in 2016, which is what the United Way calls the household survival budget. This includes housing, food, health care, transportation, technology and taxes.

For a family of four — including two adults, an infant and a toddler — the average threshold was $77,832, which also includes the cost of child care.

“These numbers were all taken from published, typically governmental, sources so people couldn’t dispute the veracity and the accuracy of those sources,” Porth said. “But they were intentionally chosen to be a conservative estimate. The idea was to err on the side of caution for the household survival budget, so it wouldn’t be dismissed as being inflated.”

The household survival budgets were significantly more than the Federal Poverty Level (FPL) of $11,880 for a single adult and $24,300 for a family of four, the report said. Most ALICE residents, therefore, don’t qualify for public assistance. 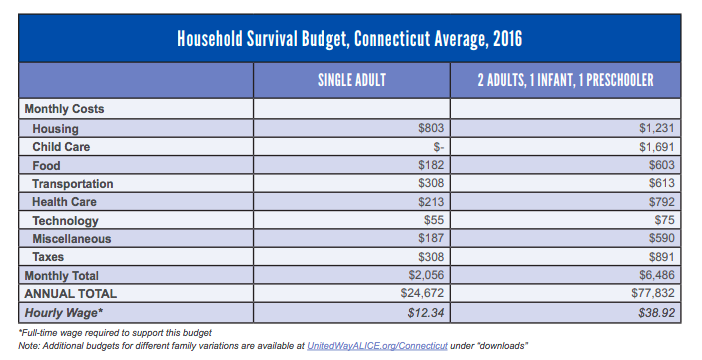 The 2016 Connecticut report also concluded, despite overall improvement employment and gains in median income, that the economic recovery in Connecticut has been uneven.

“Many ALICE households continue to face challenges from low wages, reduced work hours, depleted savings, and increasing costs,” the report said. “For the many households who earned just above the ALICE threshold in the past, the increases in the cost of living have pushed them below the threshold and into financial hardship.”

In Connecticut, 45 percent of jobs paid less than $20 per hour in 2016, an improvement from 54 percent in 2010. At the same time, many ALICE workers are still struggling. An increase in contract jobs and on-demand jobs has created less stability. Gaps in wages persist and vary, depending on the type of employer, as well as the gender, education, race, and ethnicity of workers, the report said.

This is the third ALICE report that Connecticut United Ways have released over the last six years. The ALICE Project is an initiative of United Ways in a number of states. The project grew from a pilot in Morris County, N.J. in 2009, to the entire state of New Jersey in 2012, and now to 18 participating states.

Once in poverty, then ALICE, now thriving

Karen Perham-Lippman of Vernon is the mother of three boys. She found herself struggling financially in 2006 after her divorce. Her church paid her electric bill one month and she received some donations from food pantries.

“I was very quietly telling a couple people, because I felt a lot of shame,” she said.  “I’m educated and you want to feel like you know how to handle your situation, but it’s overwhelming and it’s stressful. I felt a lot of shame in feeling like I couldn’t figure it all out by myself.”

About a year later, Perham-Lippman was still struggling financially so she called United Way’s 2-1-1.

“The thing that was so powerful about that first conversation for me is that the woman who answered the phone was incredibly kind and didn’t judge me,” Perham-Lippman said. “She listened to me and I poured my heart out.”

The 2-1-1 employee helped connect Perham-Lippman to WIC, an assistance program for young children and mothers, which allowed her to get formula for her twin infant sons. Because of her income then, she also qualified for food stamps, energy assistance, child care subsidies and vouchers for farmers markets for free fruits and vegetables.

“Having that support made me feel more confident and gave me hope,” she said. 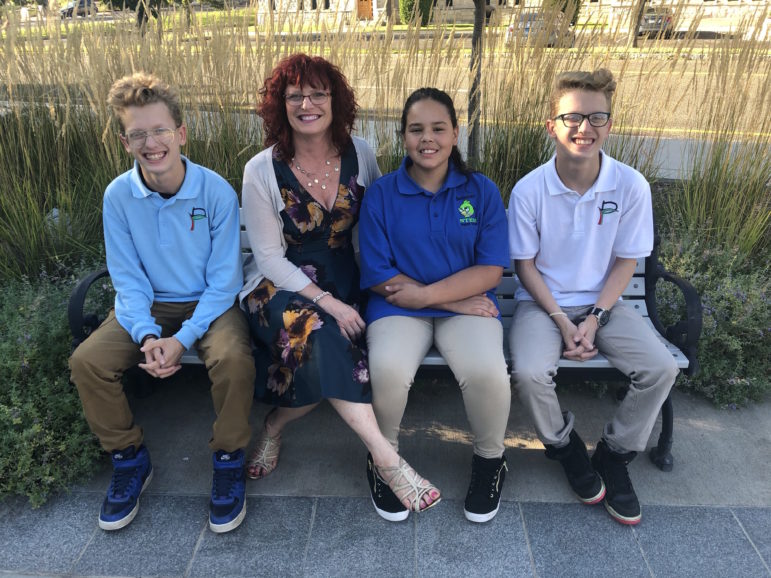 But within a year, much of her public assistance went away because she was earning more money, and she became an ALICE household until 2012, living paycheck to paycheck.

In 2009, Perham-Lippman went back to school at Asnuntuck Community College and received a software development certification in 2012, while working overtime and double-time shifts every other weekend.

Last September, she became the deputy commissioner of the state Department of Consumer Protection. This March, she became an adjunct graduate professor at Goodwin College in East Hartford, teaching in its masters of organizational leadership program.

“A decade ago, I was entering data into a database, just trying to make my $12 an hour to put macaroni and cheese on the table,” said Perham-Lippman, now 47. “I think about all the ALICEs out there who have the potential to do amazing things and we have to help them get there.”

Community organizations like United Way, she said, played a huge role in her success, but she also believes companies and organizations who employ people who fit the ALICE definition should create opportunities for those employees to change their situation. Those opportunities, she said, “might be in the form of the types of health care benefits they offer and the types of training they offer.”

Equally important, Perham-Lippman said, is changing the conversations around poverty.

“ALICE works, and ALICE is trying really hard to make ends meet and goes to a job, pays taxes and is contributing to society,” she said. “So we have to change the way we talk about [who] is poor and what is poverty.”