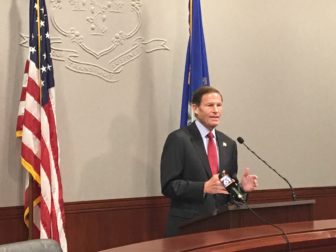 Senator Richard Blumenthal speaks to reporters about his efforts to compel documents related to Brett Kavanaugh.

Washington –Sen. Richard Blumenthal on Tuesday said he will spearhead an effort to sue for documents relating to Judge Brett Kavanaugh’s tenure in the White House.

“We are going to be going to court sometime this week to compel compliance with our FOIA request,” Blumenthal said at a press conference in Hartford. “I will be leading that effort in filing legal action later this week.”

Last month, Blumenthal and other Democrats on the Senate Judiciary Committee petitioned the National Archives and Records Administration, the Department of Justice, Department of Homeland Security and the Central Intelligence Agency via an expedited Freedom of Information Act request to produce documents relating to Kavanaugh’s tenure as President George W. Bush’s staff secretary.

“There is really no founded excuse to keep these documents concealed,” Blumenthal said. “There is no valid claim of privilege, executive or any other claim. And there is no national security issue. None of them are classified.”

As White House staff secretary from 2003-2006, Kavanaugh acted in a powerful position as a gatekeeper for information that reached the president’s desk.

Democrats are particularly interested in whether he authored or edited any documents relating to the Bush administration’s controversial enhanced interrogation and warrantless wiretapping programs. Republicans say the demand for those documents is a time-consuming “fishing expedition” by Democrats who want to derail the nomination of a judge that would tip the high court to the right for decades.

That didn’t happen. But Committee Chairman Charles Grassley, R-Iowa, did agree to Democratic requests to make public a series of documents that had been previously classified as “committee confidential” and could not be shared with the public or discussed in public.

Blumenthal discussed one of those documents with Kavanaugh before it was cleared to be released by Grassley.

It contained an email Kavanaugh wrote in 2003 in which he argued the abortion rights case Roe v. Wade was not “settled law of the land.”

In his email, Kavanaugh wrote that he was “not sure that all legal scholars refer to Roe” that way, noting that the Supreme Court “can always overrule its precedent and three current Justices would do so.”

But Kavanaugh said he never said whether he agreed with the scholars that Roe v. Wade was not “settled law,” and said several times during his hearing that the landmark case that gave women the right to abortion “is an important precedent to the Supreme Court,” that has “been reaffirmed many times,” including in the 1992 Planned Parenthood v. Casey case.

Blumenthal said Tuesday the Senate vote on Kavanaugh’s confirmation should be postponed until all documents Republicans have asked for are released.

“The process of screening and cherry-picking and sanitizing the documents that have been submitted so far really is a disservice to the American people, the United State Senate and even to Brett Kavanaugh himself. For his sake, these documents need to be released,” Blumenthal said.

Republicans, who are confident they have the votes in the closely divided Senate to confirm Kavanaugh, are not likely to postpone a confirmation vote they plan to hold later this month. GOP leaders hope to swear Kavanaugh in as a new justice in time for the Supreme Court’s next session, which begins Oct. 1.

Democrats hope some of the documents they are demanding via the courts will shed light on what Kavanaugh knew about the 2003 “theft” of information from a computer belonging to a Judiciary Committee Democratic staffer that involved strategies to oppose certain judicial nominees.

At the time, Kavanaugh was responsible for helping to vet judicial nominees who would appear before the Judiciary Committee.