A two-man debate with room for a third, Dannel P. Malloy 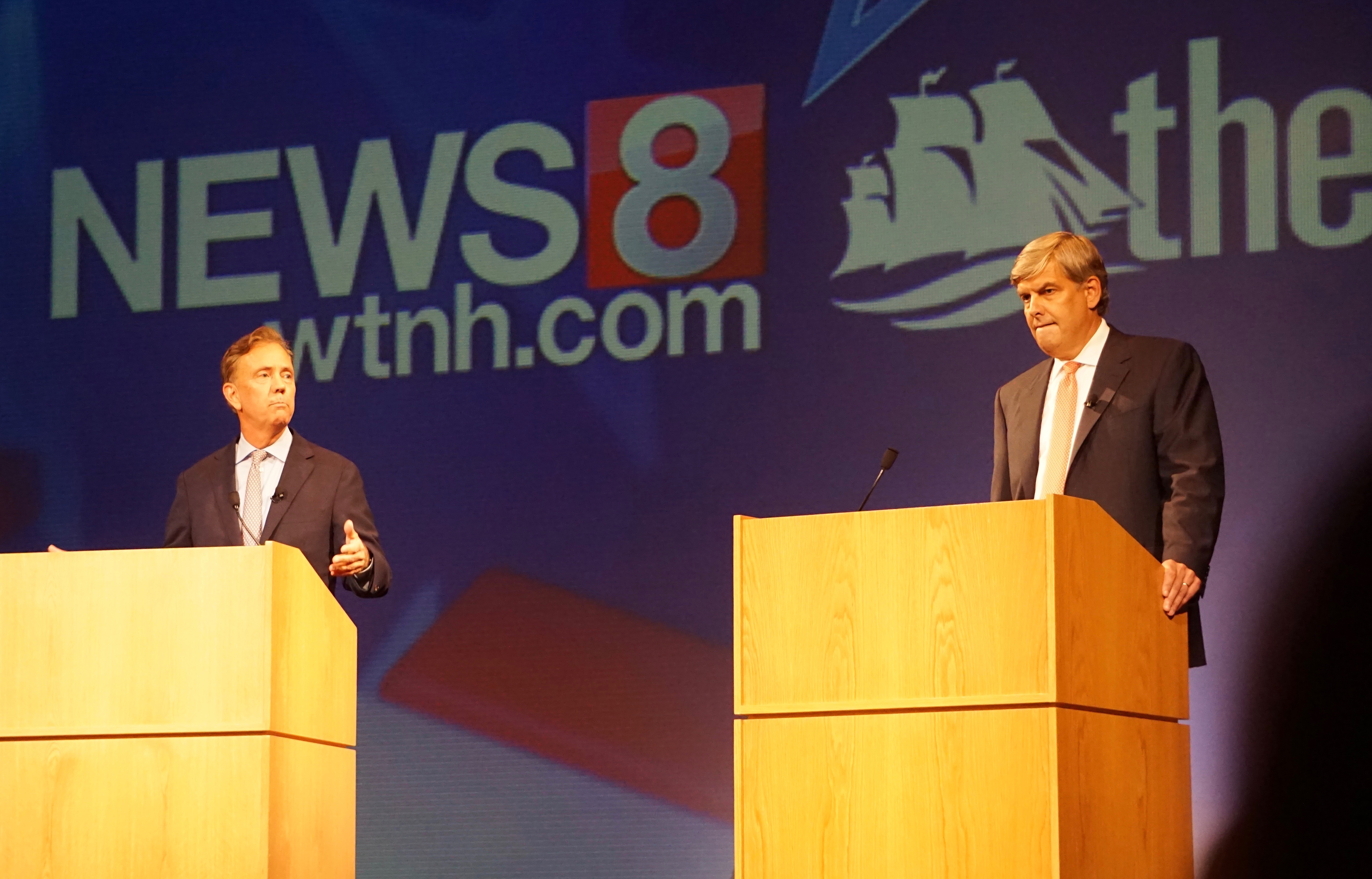 New London — The first head-to-head debate by Democrat Ned Lamont and Republican Bob Stefanowski ended Wednesday night without Connecticut voters learning how either man would close a $2.1 billion deficit or how Stefanowski would begin to deliver on his audacious promise to eliminate the state income tax.

Over the course of a contentious hour, Stefanowski repeatedly tried to convince viewers that Lamont was a new and unimproved version of the state’s unpopular Democratic governor, Dannel P. Malloy. Lamont was willing to concede Stefanowski was his own man, albeit delusional, in insisting Connecticut can live without its single largest revenue source.

Lamont, 64, who briefly became a national political figure by challenging Sen. Joseph I. Lieberman over the war in Iraq, opened and closed by noting he competed with Malloy in 2010 for the gubernatorial nomination, then saying the state is in desperate need of structural changes yet to be accomplished by Malloy or outlined by Stefanowski.

“Bob wasn’t even there to vote against him,” Lamont said, the first of his jabs at Stefanowski’s failure to vote for 16 years.

Stefanowski, 56, is a global finance executive who spent a decade in London in senior jobs at GE, UBS Investment Bank and, finally, as chief executive of a payday lender, DFC Global, a job he left in 2017. The first words he uttered Wednesday night were “Dan Malloy.”

“Dan Malloy has absolutely ruined this state and the economy,” Stefanowski said, reinforcing the message of his television advertising. “We’re losing our friends and family by the day. And Ned Lamont is actually going to be worse. He is going to try to deny it tonight.”

Stefanowski never strayed far from the central theme of his campaign since announcing his candidacy last year: Over eight years he would eliminate the state income tax imposed in 1991, a year that Stefanowski says was the start of Connecticut’s economic disintegration. Only 35 percent of voters in a recent poll say that promise is realistic, an impression that Lamont worked to reinforce.

Lamont said eliminating the income tax, if possible, would require a ruinous shift in the tax burden to cities and towns. But Lamont’s message about Stefanowski’s approach to taxes actually was simpler: Stefanowski is selling Connecticut on a fanstasy that cannot be accomplished and that Stefanowski cannot explain.

“I have no idea if this guy is going to cut anything at this point, except for maybe a commission that costs $50,00,” Lamont said. “This is poppycock.” 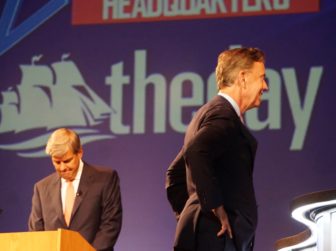 Lamont and Stefanowski during a break.

After the debate sponsored by WTNH and The Day, Stefanowski was asked why he offered no details about how he could eliminate half of the state’s tax revenue. He replied that the key is in his approach to government, promising zero-based budgeting that would root out waste, fraud and inefficiencies.

During the debate, Lamont scoffed at Stefanowski’s suggestion he could somehow make the income tax disappear, opening a $10 billion hole in the state’s $20 billion annual budget.

Stefanowski, who declined to attend a debate last week that focused on economic and fiscal issues, complained when his questioners introduced other topics, such as the legalization of recreational marijuana.

“Maybe at some point we could look at it,” Stefanowski said. “Let’s fix the economy first.”

Both candidates said the federal government, as well as the insurance insurance industry, need to play a role in the slowly-unfolding disaster in eastern Connecticut: concrete foundations contained by a natural occurring mineral that causes them to absorb water and crumble.

When Stefanowski suggested he would be better positioned than Lamont to coax aid from the Trump administration, Lamont was quick to agree: “There is no question you have a very close relationship with Donald Trump and vice versa.”

The line about the unpopular president, who has helped energize the Democratic base, prompted laughter and applause.

Lamont and Stefanowski are two of five candidates on the ballot. Of the other three, only businessman Oz Griebel has even marginal support — and he was favored by only 4 percent of voters in a recent Quinnpiac Univeristy poll.

Griebel attended the debate, telling reporters he would press for inclusion in the remaining four debates. His campaign suffered an embarrassment Monday when his campaign manager, Kyle Lyddy, abruptly resigned in the face of an arrest on charges relating from an alleged embezzlement at his former workplace.

His spokesman, Chris Cooper, has assumed the role of campaign manager.

“We’re moving on,” Griebel said. “It’s unfortunate for him, but the campaign is going forward.”