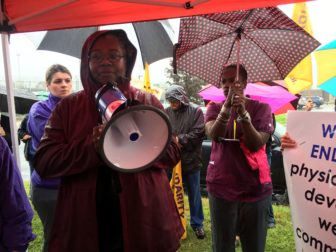 Department of Correction health care workers stood in the pouring rain outside a Hartford prison Tuesday to rally against staffing vacancies and demand an agreement from gubernatorial and legislative candidates to fill empty jobs they say are undermining quality inmate care.

Sheltering underneath a blue and yellow umbrella as he tried to see through rain-speckled glasses, social worker Matthew Eggen said the insufficient staffing levels have left health care workers unable to provide the type of care the state and inmates in the system deserve.

“We’re hardworking individuals and we’ve been gutted throughout the state for a really long time, to the point where we can’t even meet minimum standards, and that’s causing poor care, increased lawsuits, and generally it hurts moral a lot,” said Eggen, who works at Corrigan-Radgowski Correctional Center in Montville.

Tuesday’s protest comes in the midst of ongoing controversy about the state’s decision to terminate UConn Health’s contract for providing inmate health care and shift the responsibility directly onto DOC. The department estimated the move would save the state money, but according to an August report by the Governor’s budget office those savings haven’t yet been realized.

“The transition from UConn to DOC will take some time and may entail costs, making achievement of overall savings unlikely until the next biennium,” Office of Policy and Management Secretary Ben Barnes wrote.

The workers in SEIU 1199 New England, the state’s largest health care workers’ union, called on state leaders and politicians running in the midterm elections to address a list of their demands.

The campaigns for Ned Lamont and Bob Stefanowski, the Democratic and Republican gubernatorial candidates, did not immediately respond to requests for comment Tuesday afternoon.

In a statement issued Tuesday, DOC said there is a discrepancy between the department’s calculation of current health care vacancies and those cited Tuesday by union leadership. The correction department noted there were 31 vacancies when it took over the task of providing health care services, and an additional 23 positions open due to retirement, resignation or transfer to another state agency.

But the DOC agreed with union officials that appropriate staffing levels are “the foundation for quality care within any healthcare setting.” The department stated it worked with the governor’s budget office and the Department of Administrative Services to implement a “broad plan to attract talented and compassionate healthcare professionals.”

Janet Short, a registered nurse at Garner Correctional Institute in Newtown, said DOC’s health care staff is working under daily dangerous conditions, stressing that it is irresponsible and unsafe not to make staffing a priority.

Short said nurses have been mandated to work 24 hours without relief.

“They have known that we’re short staffed and we’re continuously being pushed aside, overlooked, as if it’s not important,” Short said. “It is important. That’s why we’re here today in the rain.”