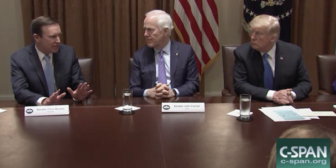 Sen. Chris Murphy warns President Trump last February about the clout of the NRA in Congress.

Washington – Sen. Chris Murphy will join other gun control advocates and a coalition of progressive groups in a one-day fundraising effort for eight Democrats hoping to defeat Republican incumbents with “A” ratings from the National Rifle Association in November’s mid-term elections.

The online campaign is an effort to show the gun-control lobby has political clout , and help flip the U.S. House — and maybe also the Senate — to Democratic control.

Participants include the Brady Campaign and Everytown for Gun Safety and other gun control organizations as well as the progressive group MoveOn.org and a number of Democratic lawmakers, including Sens. Elizabeth Warren, D-Mass., Cory Booker, D-N.J., and Kirsten Gillibrand, D-N.Y. Former presidential candidate Hillary Clinton is also involved in the effort.

The “NR8” campaign, which will take place on Oct. 5 in commemoration of the anniversary earlier in the week of the mass shooting in Las Vegas, aims to raise at least $1 million for seven candidates for the U.S. House of Representatives.

The eighth candidate on the list, Jacky Rosen, is trying to unseat Sen. Dean Heller in Nevada.

Murphy said the gun safety groups and the lawmakers will put out appeals using their e-mail lists for people to visit a website and make a donation. The money collected would be distributed evenly between the Democratic candidates, who are all supporters of stronger federal gun laws.

Murphy said the effort is aimed at showing political candidates, including Republican ones, that the gun control movement can raise campaign cash as well as the NRA, a political powerhouse that gives direct political donations to candidates but also spends tens of millions of dollars each campaign cycle on attack ads that are run independently of candidate campaigns.

“We have to show people we are a credible machine,” Murphy said.

The senator also said the campaign is aimed at weaning some Republicans away from the NRA.

But in this cycle, all support will go to Democratic candidates who would win seats in a mid-term election where the party needs to flip at least 23 seats in the House to gain control of that chamber.

“If Congress won’t act to change our gun laws, then we need to elect a Congress that will,” the NR8 website says.

Some political analysts also say the Senate is in play this year. But unlike the House, where there are many open seats and endangered Republicans, the Senate poses a more difficult challenge for Democrats.

While the NRA has recently almost exclusively backed GOP candidates for public office, Scott Wilson of the Connecticut Citizens Defense League said it wasn’t always so and decries the partisan nature of the gun debate.

“It’s unfortunate to see politicians use gun control in a partisan manner,” he said.