Malloy to be a visiting professor at BC Law School 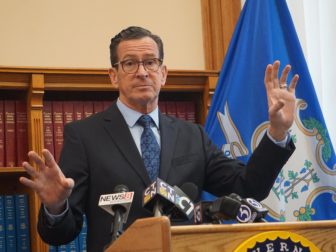 Gov. Dannel P. Malloy, a “double-eagle” as a graduate of Boston College and its law school, will land at his alma mater after leaving office next year, serving as a visiting law professor in the spring semester.

“As the fifth Rappaport Distinguished Visiting Professor, Malloy will offer a seminar and participate in lectures and panel discussions throughout the semester,” BC Law, the alumni magazine, reported Wednesday. “He will draw upon his combined 22 years in government as both a mayor and governor to illuminate matters across the spectrum of policy-making.”

Malloy, 63, has not announced longer-term employment plans, though he has said he and his wife, Cathy, intend to reside in Connecticut. His eight years as governor end on Jan. 9.

Malloy graduated in 1980 from B.C. Law School, then became a prosecutor in New York before joining a law firm in Stamford, the city where he was raised and later served as mayor. Criminal-justice reform has been a priority of his administration, drawing national attention.