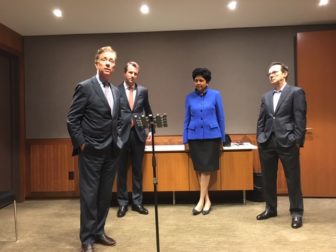 New Haven — Democratic gubernatorial candidate Ned Lamont had breakfast Friday with senior corporate executives who have agreed to serve on a Business Advisory Council that Lamont says he would use to recruit and retain businesses in Connecticut.

One of them, Indra Nooyi of Greenwich, who recently stepped down as chief executive officer of PepsiCo., already has worked with Lamont and others to help convince a tech company, Infosys, to locate one of its new business hubs in Hartford.

Nooyi was the matchmaker who introduced Lamont to Ravi Kumar, the chief executive officer of Infosys, an India-based company. State officials say Lamont played a role in introducing Kumar to Hartford-area executives, who then helped convince him to locate his business in the city.

“These are business leaders who want to take the lead in championing this state,” Lamont said.

Nooyi, a classmate of Lamont’s in the third graduating class from the Yale School of Management in 1980, is an Indian immigrant who recalls her arrival in Connecticut 31 years ago, listening to a driver extoll the virtues of the state.

“Drivers today say, ‘My God, this state is a mess.’ That’s a huge difference, but I think we have the opportunity to bring back a spirit of winning,” Nooyi said. “Do we have problems? Yes, but as a resident of Connecticut, somebody who intends to go out of Connecticut feet first, I want to be part of the solution, not just abandon the state and try to go someplace that is sunnier and has lower taxes.”

Nooyi was one of three executives available after the private breakfast meeting at The Study at Yale, a New Haven hotel. The others were David Scheer, the chairman of Achillion, a small pharmaceutical company founded in 1998; and R. Adam Norwitt, the chief executive of Amphenol, a global manufacturer of electronic connectors based in Wallingford.

Hamilton “Tony” James, the billionaire vice chairman of the Blackstone Group, and Alan D. Schnitzer, the chairman and CEO of the Travelers Companies, are among the other members of the advisory committee.

Scheer’s company was launched with the help of Annie Lamont, a venture capitalist.  It employes 65 people in what he calls “cutting-edge” pharmaceutical research. Annie Lamont, who founded a new investment group in 2014, was also at the breakfast.

“Ned is someone who speaks our language,” Scheer said.

Connecticut’s next governor will be a businessman, and all the contenders are presenting themselves as best situated to improve the state’s business climate.

Lamont is the founder of Lamont Digital, a cable-television company he no longer owns. Republican Bob Stefanowski is the former chief executive officer of DFC Global, a payday lender. He also held senior posts at GE and UBS Investment Bank.

Also on the ballot is a petitioning candidate, Oz Griebel, the former president of the MetroHartford Alliance.