The Kavanaugh fight pivots to the polls 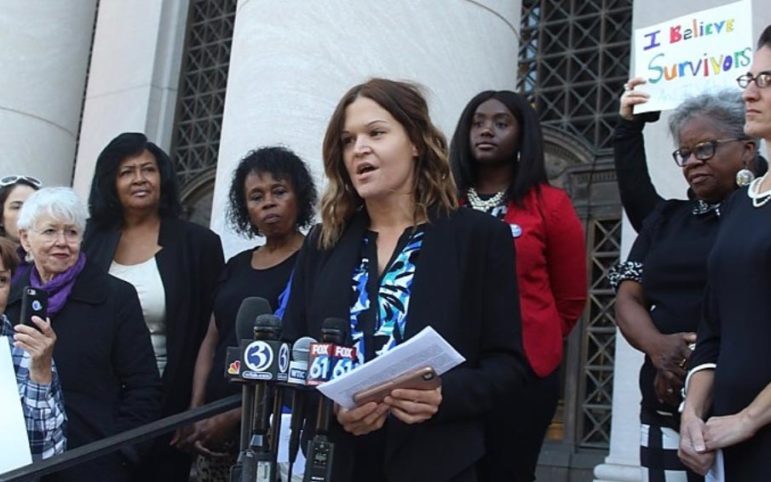 Sally Grossman, a Planned Parenthood volunteer, recounted being sexually assaulted 20 years ago by a friend in college.

As senators in D.C. moved toward confirming Brett Kavanaugh as a Supreme Court justice on Friday, dozens of female elected officials and activists took to the steps of New Haven’s federal courthouse vowing to convert their anger into votes in Connecticut’s November elections.

They held a noon rally outside the Church Street courthouse that mirrored similar protests throughout the country, at which participants describe their own experiences with sexual assault and harassment.

The question now is how the Kavanaugh affair — and its place in the ongoing #MeToo movement’s quest to convert anger over the Trump administration’s policies toward women into action — will affect the Nov. 6 elections.

Both Democratic and Republican strategists have concluded that the uproar over Kavanaugh’s alleged sexual misconduct will work to their party’s advantage in the battle for control of the U.S. Senate and House of Representatives. Trump led a pivot this week toward attacking the story of Kavanaugh’s accuser, Dr. Christine Blasey Ford, to appeal to the party’s conservative white male base.

Here in Connecticut, the governor’s office, as well as control of the state legislature, are up for grabs. Speakers at Friday’s rally urged women and their allies to convert anti-Kavanaugh sentiment into votes for Democratic gubernatorial candidate Ned Lamont. In hopes of picking up anti-Trump votes, Lamont has made a point of supporting Blasey Ford and opposing the Kavanaugh nomination. Republican opponent Bob Stefanowski has publicly supported the FBI investigation into accusations about Kavanaugh but refrained from taking a public position on his nomination, stating that that’s a federal, not state matter. 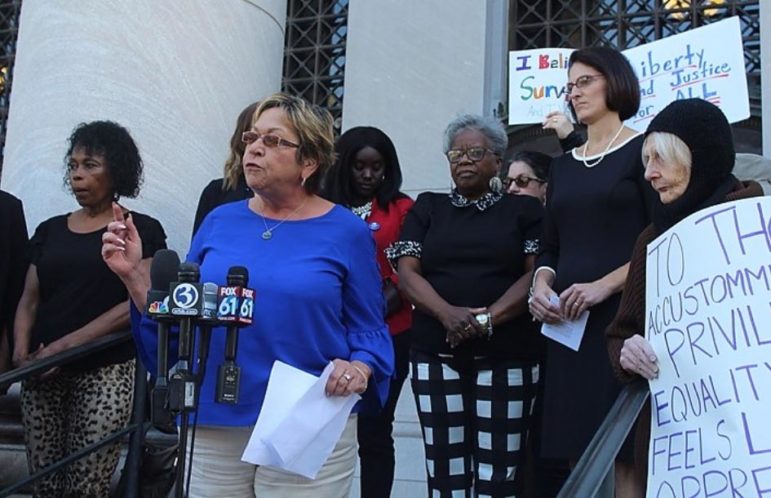 At the New Haven rally, State Rep. Kim Rose of Milford told a story about breaking free from a man who grabbed her and tried to rape her when she was 11 years old.

At the New Haven rally, State Rep. Kim Rose of Milford told a story about breaking free from a man who grabbed her and tried to rape her when she was 11 years old. She said adults didn’t believe her when she told the story — until a year later when the man was arrested for trying to abduct another girl outside an elementary school.

Rose said she had never told that story before; it happened 49 years ago. Then she attacked Lamont’s Republican opponent, Bob Stefanowski, for “supporting a president who regularly mocks women and the disabled.” She urged people to vote for Lamont in order to protect the right to abortion as well as the ability of sexual assault victims to have their stories be taken seriously; she specifically cited a bipartisan state “Yes Means Yes” law requiring affirmative consent on college campuses that Stefanowski’s running mate voted against. (Reached after the rally, Stefanowski spokesman Kendall Marr said Stefanowski supports that law.)

Sally Grossman, a Planned Parenthood volunteer, recounted being sexually assaulted 20 years ago by a friend in college. “History will not look kindly” on senators who vote to confirm Kavanaugh, she predicted. “You will be remembered for the cowards that you are.”

“We need leaders who will be upstanders, not bystanders” in the quest for justice, declared Fairfield State Rep. Cristin McCarthy Vahey. “Take that anger and turn it into action. Use it as fuel… Talk to voters. Let them know how important this election is.” She argued that “only voting” can reverse the policies promoted by the Trump administration and favored by his appointees to the Supreme Court. “We will stand. We will speak,” Vahey stated. “And we will vote.”

Rally organizer Mercy Quaye, a New Haven journalist who sits on the Connecticut board of the pro-choice NARAL organization, predicted that “after we take the Senate” and sweep the November elections, “I want to look back and say, ‘Who’s laughing now?’”

After the rally the legislators were asked specifically about why they believe the Kavanaugh affair will resound more to the Democrats’ benefit in state elections. Bridgeport State Sen. Marilyn Moore noted that Stefanowski found it in his interest not to take a stand on the nomination rather than follow the lead of Trump and some other Republicans elsewhere in supporting him, while Lamont concluded that opposing Kavanaugh would help his campaign. Moore also argued that “there are enough women in Bridgeport” and other major cities in Connecticut to show up at the polls to make a difference. She said she plans to keep the focus on the issue at an Oct. 11 Housatonic Community College forum on sexual assault.

Vahey added that people shouldn’t “underestimate kitchen-table conversations and the undercurrent’ of outrage among many women who haven’t spoken publicly about their experiences but have nevertheless been affected by the Kavanaugh nomination.

“They’re there,” Vahey said.“Even if they’re not seen.” Connecticut Republicans are banking on voters thinking more about the state’s fiscal woes and the record of the outgoing Democratic Malloy administration than about Trump or Kavanaugh or D.C. when they voted in November.

State Republican Chairman J.R. Romano noted that when Trump was on the ballot in 2016, Republicans made gains in Connecticut. They pulled even with Democrats in the State Senate and narrowed the gap in the House. Both chambers are considered up for grabs this November. Opinion polls have shown Trump unpopular in Connecticut, but Malloy more unpopular.

Stefanowski spokesman Marr echoed the idea that the Kavanaugh appointment is a federal, not a state, matter.

“Bob has made his opinions on the matter clear: He thinks sexual assault should be taken seriously. Victims should be treated with respect,” Marr said. “But he’s running for governor of Connecticut, not senator. In that role as governor, he would be responsible for appointing justices for the court here. He’s committed to picking only justices who have demonstrated moral character and impeccable track records. We believe that Ned Lamont is going to continue to make this race about anything other than what Dan Malloy has done to this economy.”

He added that Stefanowski has said he recognizes Roe v. Wade as the law of the land and “would not seek changes.” 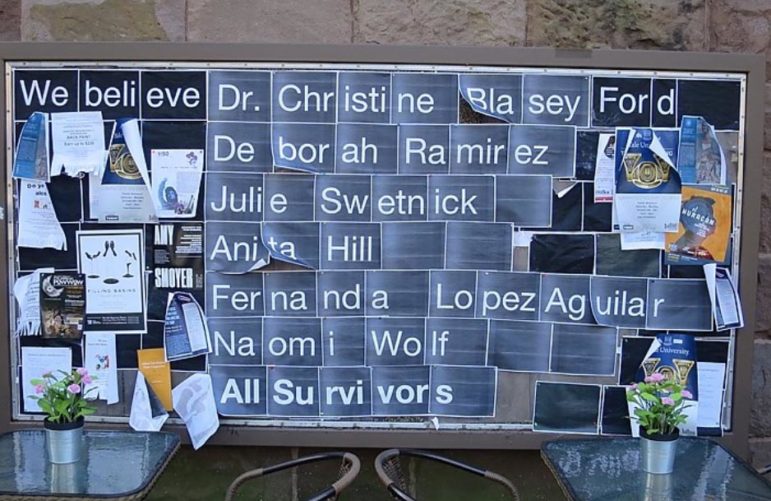 A bulletin board outside Yale’s Women’s Center on Elm Street.

This story was first published Oct. 5 in the New Haven Independent.