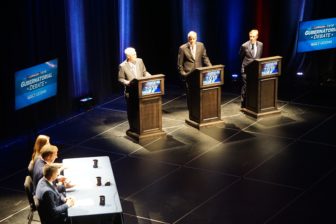 From left, Oz Griebel, Bob Stefanowski and Ned Lamont at a recent debate at UConn.

With four weeks until the election, one in five voters who now have a preference say they could change their mind.

Voters disapprove of the job performances of two men who are not on the ballot: President Donald J. Trump (59 percent to 39 percent) and Gov. Dannel P. Malloy (69 percent to 23 percent). But the Republican president at mid-term is a bigger factor than the exiting Democratic governor.

“In deciding which candidate to support, President Donald Trump is a more important factor for voters than Gov. Dannel Malloy, although both men appear to be doing damage to their own parties,” said Douglas Schwartz, the poll’s director.

Tying Malloy to Lamont has been a central feature of advertising by Stefanowski’s campaign and Change PAC, an independent-expenditure group funded by the Republican Governors Association.

Stefanowski’s latest ad, which features the candidate at home with his wife and three daughters, is an attempt to address both the gender gap and his unfavorables.

Unaffiliated voters,  the largest bloc of voters in Connecticut followed by Democrats, favor Lamont, 42 percent to 36 percent, with 18 percent for Griebel.

The poll gives Griebel, the former leader of the MetroHartford Alliance, a stronger argument for inclusion in the final two debates on Oct. 18 and 30. It is the first survey to show him topping 10 percent.

Griebel is a former Republican who unsuccessfully sought the GOP nomination in 2010, but his support is stronger among Democrats (9 percent) than Republicans (5 percent).

The survey of 767 likely voters from Oct. 3 to 8 has a margin of error of plus or minus 5 percentage points. It is Quinnipiac’s first poll of likely voters and cannot be directly compared to a previous survey that showed Lamont with a larger lead.

Quinnipiac was in the field during the contentious debate over the confirmation of Brett Kavanaugh to the U.S. Supreme. A Politico/Morning Consult poll also released Wednesday shows the Kavanaugh confirmation energizing more Democrats than Republicans.

“The number one issue for Connecticut voters is the economy, and Lamont wins decisively among those voters,” Schwartz said. “Voters also say, however, that the most important quality in a candidate for governor is the ability to bring needed change, and among those voters, Stefanowski wins big.”