Sniff around campaign finances with our new database

By the end of August, candidates for offices ranging from state representative to governor reported raising more than $40 million and spending around $30 million in the 2018 election cycle. CT Mirror today is launching CT Campaign Cash, a database tool to ease inspection of those receipts and expenditures.

The data is taken from reports to the State Elections Enforcement Commission. 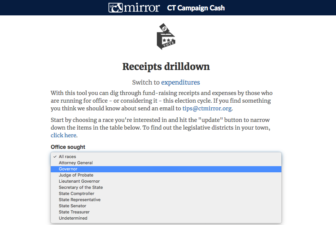 This database includes payments to and from candidates who are running, were running, or raised money through exploratory campaigns in the 2018 election cycle. The checks aren’t made out to candidates like Ned Lamont or Bob Stefanowski, but to their committees, which have names like Ned for CT or Bob for Governor.

The receipt transactions in our system are largely contributions, like when you send $25 to support your local state rep candidate. But loans from candidates and grants from the voluntary Citizens’ Election Program, which provides public financing to qualifying candidates, also are in here.

What’s not in here?

The database is focused on hard dollars — the money contributed directly to and spent by a campaign. It does not include money raised or spent by the state parties, local town committees or super PACs. The latter can make unlimited independent expenditures to support or oppose candidates. Some records are missing because the different data sets we used to build the database couldn’t be perfectly stitched together (more on that here).

This database doesn’t include races for federal office. Candidates for the U.S. Senate and U.S. House report data to the Federal Election Commission. A handy way to browse similar data for federal races is through ProPublica’s FEC Itemizer. (That system excludes U.S. Senate races because they do not file electronically).

A word of caution about using this tool to calculate total spending or money raised: Accounting can be more complicated than adding up itemized expenses and receipts, and reports can be amended. Because these appear in the SEEC database as new records, they can be double counted. CT Campaign Cash displays the number of amendments, and marks individual transactions as amendments or originals, but the amended transactions aren’t linked back to the transactions they amend.

If you want to get the latest total for money raised or spent, click on a link to the latest filing and check the number of aggregate contributions or expenditures.

There are two ways to use the database.

First, you can search for a committee if you know the name of the candidate you’re looking for. Once you find a committee, you can see documents they’ve filed, and itemized expenses and receipts that are contained in those documents.

Or you can use our “Receipts drilldown” or “Expenditures drilldown” mode, which might be a little less straightforward. The drilldown page starts off displaying every itemized expense or receipt from every candidate in every race and you can narrow results down from there.

For example, to dig into the expenditures by committees running for a seat in the State House, visit the Expenditures drilldown page and choose “State Representative” from the “office sought” dropdown and click the “update” button. 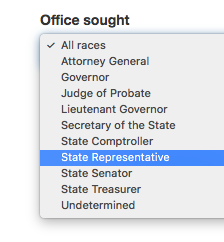 When the results are updated, you’ll wind up here. The table at the bottom of the page will be updated to include only expenditures by candidates for state representative. Now you can choose a district, let’s say the 2nd district. (If you’re searching for a statewide office, like Governor, there will be no district dropdown.) 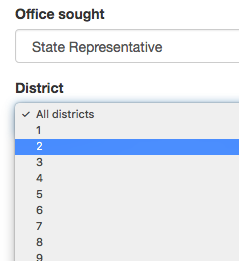 Doing that will put you here, and the table at the bottom of the page will contain all of the expenditures for the 2nd House district, like this: 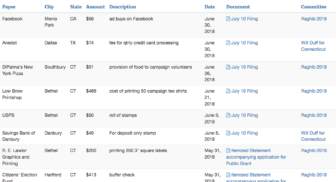 Finally, if you want to narrow it down to just one committee, you can use the committee dropdown again click the “update” button.

Then you’ll have a list of itemized expenditures by Will Duff for Connecticut.

What district am I in?

If you don’t know what district you’re in — and who does, really? — you can find the legislative districts for your town here, or, because district boundaries don’t fall along town boundaries, look up your district by your address here.

You can find your probate court district here.

Are all these people on the ballot in November?

No. This includes records of candidates and exploratory candidates who have dropped out and or lost primaries.

A full list of candidates for office is available on the Secretary of the State’s site here.

How has the incarcerated population reached such historic lows during the pandemic?

In some states, the census is an investment. Not Connecticut.

Even though one-fourth of CT's census tracts are deemed hard to count, the state is relying on volunteers and hopes for philanthropy.