While universally agreeing to enforce sales tax collections on internet retailers, Connecticut’s gubernatorial contenders continued to battle Wednesday over how to fix the state’s finances and its economy.

Republican Bob Stefanowski, Democrat Ned Lamont and independent Oz Griebel sparred over income taxes, tolls, the health — or lack thereof — of Connecticut’s economy, and the best ways to revitalize cities during a mid-morning forum with the state’s merchants’ association.

“This is my kind of crowd, a business crowd, people who have invested in Connecticut,” Stefanowski, former chief financial officer of UBS Investment Bank and a senior executive at GE, told the roughly 100 members of the Connecticut Retail Merchants Association gathered at The Bushnell in Hartford.

Stefanowski, who has centered his campaign on a pledge to deliver “fundamental economic reform” through tax cuts, insisted Connecticut’s business climate is headed in the wrong direction.

“What has happened to this state over the last 20 years is inexcusable,” he said. More importantly, Stefanowski added, he is convinced Lamont would order major tax hikes, following in the footsteps of outgoing Democratic Gov. Dannel P. Malloy.

The GOP nominee repeated his oft-made pledge to phase out the state’s income tax over the next eight years — even though that tax currently pays for slightly more than half of the budget’s General Fund, and the state’s finances, unless adjusted, are projected to run $2 billion in deficit in the first fiscal year after the election. He also would eliminate the estate and business entity taxes.

When asked for examples of how he would eliminate waste in state government, Stefanowski said he would try to remove unnecessary administrative posts in all agencies and departments, and would curtail or cease operation of the New Britain-to-Hartford busway.

“I think it’s a false promise to tell you we’re going to eliminate the income tax,” Lamont said, repeating his frequent warning that even attempting a phase-out would drain huge dollars from municipal aid and higher education, creating “skyrocketing property taxes” and decimating community colleges.

But while Lamont doesn’t see Connecticut’s business climate as perfect — government regulation suffers from “a bad case of the slows” — he sees things far more optimistically than Stefanowski does. “This state is turning around and going in the right direction,” Lamont added.

Stefanowski opposes tolls and labels them “a tax on tires.” Lamont has a plan to place tolls only on tractor-trailer trucks and says this would enable Connecticut to catch up on at least some of the infrastructure rebuild it has deferred for too many years.

Griebel, a former CEO of the Hartford MetroAlliance, questioned how seriously both of his rivals are taking Connecticut’s fiscal and economic challenges.

When it comes to Stefanowski’s income tax pledge, Griebel called it “a lot of utter nonsense.”

As for tolls, the independent candidate — who chaired the former state Transportation Strategy Board — quipped, “I’ve been for tolls since Napoleon was a pup.”

Electronic tolling on state highways, on all vehicles, would finance the type of infrastructure rebuild that would turn Connecticut’s proximity to New York and Boston into an asset once again, Griebel said. Present-day congestion has neutralized that advantage. 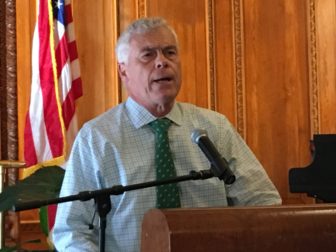 How would he help retailers and small businesses? Griebel pledged to turn the governor’s post into “chief marketing officer for the state” and lead outreach efforts to new businesses and to help existing ones expand.,

“We’ve taken the private sector for granted,” he said, adding the message his administration would communicate is that, “We appreciate the employees you have. We appreciate the taxes you and they are paying.”

This would give him time, he added, to approach state employee unions about further concessions — an area on which all three candidates found some common ground.

The next governor won’t have great leverage to obtain more givebacks. That’s because a 2017 concessions deal ratified by unions and the legislature shields most unionized workers from layoffs through mid-2022.

All three candidates told the retailers they would push to end the illegal advantage online merchants based out of state hold over brick-and-mortar Connecticut stores. Many of those online merchants still do not collect and remit sales tax back to the state. Connecticut consumers who are not charged sales tax when they buy items online are required to report the transaction — and to pay the appropriate sales tax — to the state when they file their income tax returns. But many do not. 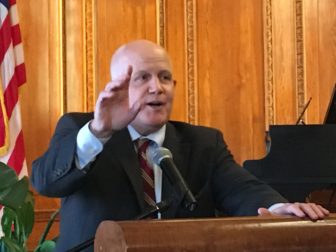 After Wednesday’s forum, Lamont and Stefanowski moved closer toward releasing at least some details of their federal income tax returns.

Stefanowski said he had gotten an extension until Oct. 15 to file his return. Having just completed that, he said his campaign soon would release a summary of that filing.

Lamont, who originally said he would only release his return if and when Stefanowski did so, removed that condition Wednesday.

“I think we’ll get those released within the next week,” Lamont said.

I think it’s a lot of hoo-ha,” said Griebel, who released his return in late September. “Why has it taken so long? It’s not that complicated. I did it.”