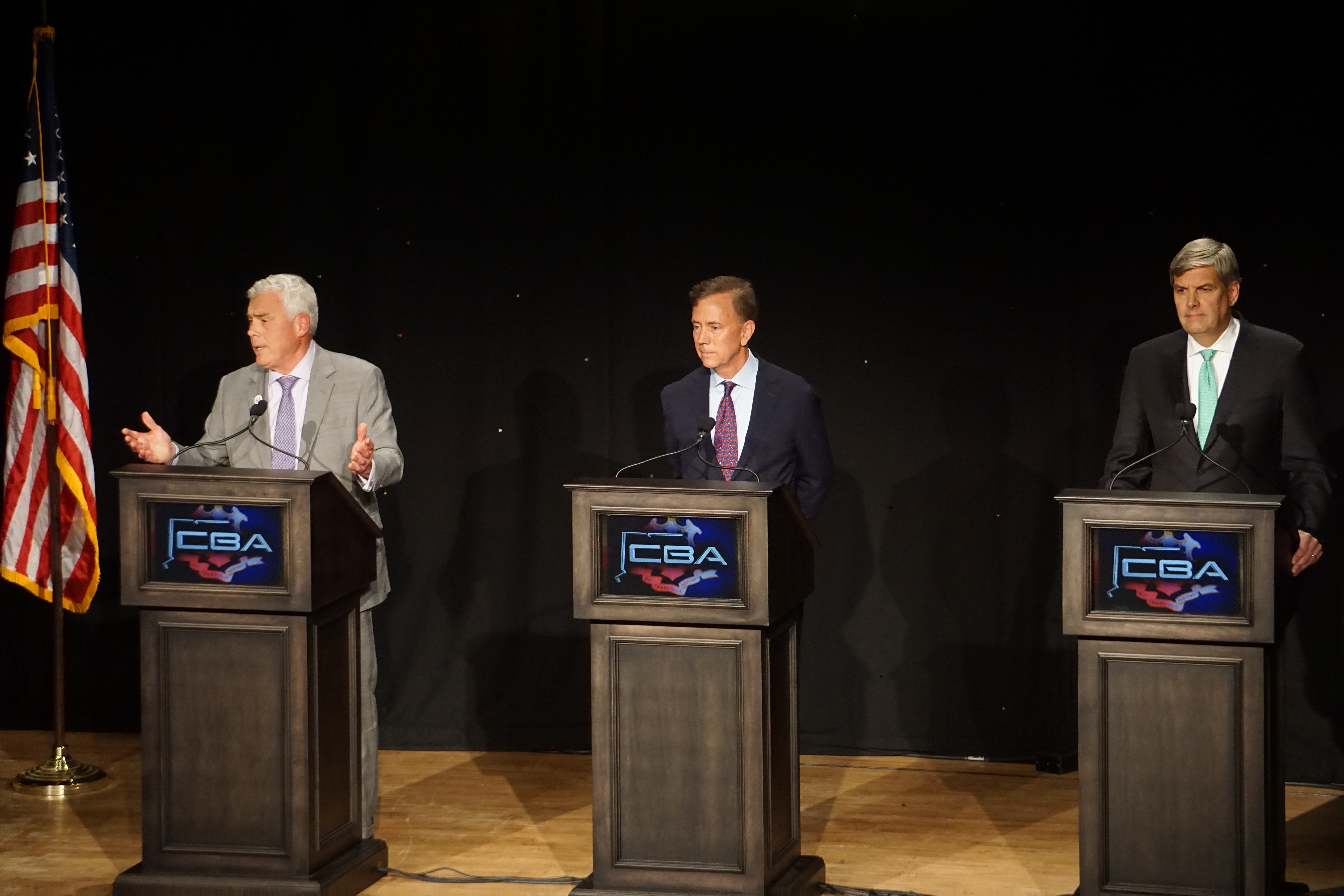 Hartford — Republican Bob Stefanowski’s bold promise to eliminate Connecticut’s income tax over eight years came under withering attack Thursday by Democrat Ned Lamont and Oz Griebel, a petitioning candidate struggling to be taken seriously in the waning weeks of the race for governor.

At the midpoint of a one-hour debate sponsored by the Connecticut Broadcasters Association, Griebel boiled over with what he later called frustration at the failure of anyone to specifically address how the state can close a projected budget shortfall of $2 billion and improve an aging transportation infrastructure.

“You have no solutions, Bob!” Griebel yelled.

Griebel said later he is equally frustrated with Lamont, but Stefanowski was the common target at times of Griebel and Lamont over what is the boldest promise of the campaign: Eliminating the state’s single largest source of revenue, without raising the sales tax or finding other new sources of revenue.

Of the five gubernatorial candidates on the ballot, Lamont and Stefanowski are the only ones with a major presence on television. In a recent Quinnipiac University poll, Lamont was favored by 47 percent of likely voters, compared to 39 percent for Stefanowski and 11 percent for Griebel. The other candidates are Libertarian Rod Hanscomb and Mark Stewart Greenstein.

The two major-party candidates opened the debate Thursday at Infinity Music Hall in downtown Hartford by trying to reinforce themes from their recent advertising — each man claims he is a true agent of change who can stabilize the state’s finances and grow what has been one of the weakest state economies in the U.S.

“You want somebody who is going be absolutely fearless when it comes to taking on the entrenched interests and shaking up the old ways of doing business. That’s what I’ve done my entire life,” Lamont said.

His campaign has been stressing a personal biography that includes founding a small cable-television company that competed with national giants on college campuses and small communities, and his challenge of U.S. Sen. Joseph I. Lieberman in 2006 over the war in Iraq.

Stefanowski for the first time treated Griebel as an opponent worth undermining, saying in his opening statement that Griebel and Lamont were running the same campaign.

“You have three candidates on stage, but you really have two choices,” Stefanowski said. “You’ve got Oz and Ned, who are more of the same. They want to raise taxes. They want to make bigger government, and they want to drive this economy into another term of Dan Malloy.”

Stefanowski, a former corporate executive whose last private-sector job was chief executive officer of DFC Global, a payday lender, said he is Connecticut’s only chance for real change.

Griebel, who recently retired as the leader of the MetroHartford Alliance, said Connecticut needs to break with the status quo, and a governor “not beholden to parties, not beholden to dogma.”

Stefanowski’s promise to run state government like a business drew criticism from Griebel.

Government fills a void in the lives of the public, he said.

Stefanowski was careful during the hour to keep his distance from endorsing public policies established by Gov. Dannel P. Malloy.

Lamont and Griebel said they would have welcomed a Syrian refugee family that had been vetted by U.S. officials and relief workers, only to be told by Indiana Gov. Mike Pence, now the vice president, they were not welcome in the Hoosier state.

Stefanowski said he was unfamiliar with the episode, the source of national news coverage, but he would try to be humane. He said he opposed sanctuary cities, which was part of the controversy over the Syrian family, whose members entered the country legally.

“I’d err on the side of being generous,” Lamont said.

“Everybody in this country is entitled to protection under the rule of law,” Griebel said.

Stefanowski broke with Lamont and Griebel over some of the criminal justice reforms promoted by Malloy, mostly to national acclaim. And he questioned statistics showing Connecticut’s crime rate has plunged. Stefanowski attributed the fall, in part, to a population that declined by .2 percent in 2016.

“This early release program is out of control,” Stefanowski said.

He mentioned the defendant in a triple homicide in Griswold who was paroled after serving the Connecticut minimum of 85 percent of a sentence for violent crime. The parole board is separate from the Risk Reduction Earned Credit Program, which allows inmates to gain early release through education and other programs.

Stefanowski and Lamont clashed sharply over the arrival of Infosys, an India-based company that has chosen Hartford for one of its regional technology hubs. Under fire for outsourcing jobs, the company has made a commitment to hiring in the U.S.

Stefanowski said the company’s history was suspect and questioned its commitment to U.S. jobs. His campaign later circulated a story from the Times of India from 2017 about Infosys paying $1 million to resolve claims it brought foreign I.T. workers into New York in violation of their visas.

Lamont, who made some introductions that played a role in the company’s explorations of Hartford, told Stefanowski it was unconscionable to insult a new employer. One of the company’s top U.S. executives sat in the audience.

“To diss these guys the way he did is one way to roll up the welcome mat and send businesses in the opposite direction,” Lamont said after the debate. “He was dead wrong on that, dead wrong.”

Stefanowski said he was simply reciting some of the less attractive parts of the company’s history. He said he would love to meet its officials.