Lori J. Pelletier is resigning as president of the Connecticut AFL-CIO, leaving the state’s largest labor organization in search of new leadership at a potentially pivotal junction for unions, especially in a public sector facing a new governor and legislature in January.

Pelletier, an AFL-CIO officer for 19 years and its top leader for five, told the labor federation’s board Wednesday she is moving to Washington D.C. to join American Income Life Insurance, which sells supplemental insurance to labor and credit unions. Her resignation takes effect on Nov. 30.

Sal Luciano, a former state social worker who retired recently as the executive director of a major public-employees union, AFSCME Council 4, will be the interim leader of the AFL-CIO. An election for Pelletier’s successor must be held within 100 days.

Pelletier, 55, of Middletown, who became a labor activist as a Pratt & Whitney machinist, is the second woman to lead the AFL-CIO in Connecticut and first openly gay woman to lead a state labor federation in the United States.

How public-sector unions organize and fund themselves are a national issue in the wake of an adverse U.S. Supreme Court decision, and labor in Connecticut is facing a more aggressive element of the political class, especially among Republicans, willing to challenge the state’s relationship with unions.

“It’s one of those historical cross roads,” Pelletier said Wednesday in a brief interview. “But in Connecticut, the leaders of these unions have done an incredible job.”

Overall, union membership is up over her tenure, from 207,000  in 2013 to 278,000 last year, reflecting a mix of new hiring into union workplaces, as well as workplaces whose employees have unionized, including assistant attorneys general and graduate students at UConn. Union members were 16.9 percent of the Connecticut workforce in 2017, up from 13.5 percent in 2013.

During her tenure, the AFL-CIO and other labor organizations have struggled to adjust to a changing political and fiscal landscape. In 2010, labor played an instrumental role in electing Dannel P. Malloy as the first Democratic governor in a generation, but it clashed with Democratic allies over state budgets and tax structures that unions deemed too austere and insufficiently progressive.

In 2016, Pelletier raised eyebrows by organizing a picket line outside the state Democratic Party’s annual fundraiser to protest a Democratic governor and legislature for opting to lay off unionized state workers instead of raising taxes on the rich. She subsequently failed to win a spot as a delegate to the Democratic National Convention, once an unthinkable snub for the head of the AFL-CIO.

Her predecessor, John W. Olson, had served as a Democratic state chairman during a portion of his 25-year tenure as leader of the AFL-CIO. The campaign to choose her successor will come as labor tries to take the measure of whomever is elected governor on Nov. 6. Both major-party candidates have indicated they will seek concessions from state employees.

Retiree health and pension benefits are currently set by a contract that runs through 2027, but the next legislature is likely to reconsider if retirement benefits should continue to be subject to collective bargaining or set by statute, as is the case in most states.

In an interview last year, Pelletier said she wondered if Republican candidates would make collective bargaining a major campaign issue in 2018.

“I mean either you respect collective bargaining or you don’t” she said. “That has been a litmus test for years, whether it’s running for board of ed or governor. I mean, that’s always been our criteria. So they may very well use it. They may try to create this ‘evil state employee that’s greedy.’ But that’s not the reality. And so when you start talking about rank-and-file state employees who are working really hard at providing services for all of us, their neighbors understand that, their friends understand that. And again, if I was writing their campaign for 2018, that is not where I’d go.” 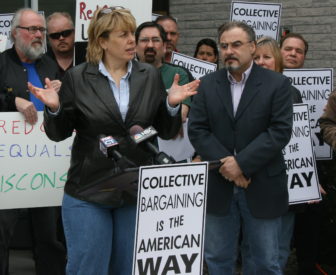 Lori Pelletier and Sal Luciano, the former AFSCME leader, in 2011.

The sustainability of the current pension and retiree health system has been an issue for Republicans and some Democrats.

Public-sector unions have become a more significant part of the labor movement as a majority of U.S. private-sector workers are non-union, with many drawing paychecks from service and retail jobs where minimum standards for pay and benefits often are set by law, not by the marketplace or negotiated contracts.

Aside from protecting collective bargaining, major labor issues in Connecticut next year are expected to include a debate over raising the $10.10 minimum wage or implementing a system of paid family and medical leave that would be funded by employees and administered by employers.

Public sector unions were dealt a significant financial, legal and political blow earlier this year by the U.S Supreme Court.

The ruling in Janus. v. AFSCME, Council 31 allows non-union government workers to stop paying agency fees, reversing a 41-year-old precedent set in another case, Abood v. Detroit Board of Education. Abood allowed government workers to opt out of the unions and decline to contribute to union political funds, but they still could be assessed for a share of the costs incurred during collective bargaining.

At issue is the financial stability of public-sector unions, which collect $29.4 million in annual dues from 39,647 unionized state employees in Connecticut, and another $3.4 million in agency fees from 5,490 state employees who are not union members but benefit from union-negotiated wages and benefits.