After sharp exchanges at a debate, Bob Stefanowski, left, and Oz Griebel pass each other.

Behind Republican gubernatorial candidate Bob Stefanowski’s bold promise to eliminate Connecticut’s income tax in eight years is a significant disclaimer not heard in any of his campaign ads: No cut is contemplated for two years. In fact, none are guaranteed at all.

Stefanowski says he will close a projected $2 billion budget shortfall facing the next governor in January 2019 by “ripping costs” from state government, then pivot in 2021 toward stimulating the economy by cutting taxes. Subsequent cuts would depend on economic growth — “triggers,” he calls them.

So, what does Stefanowski see as the odds of turning Connecticut’s sluggish economy into a juggernaut capable of providing enough growth to meet his goal of eliminating an income tax that now generates half of all state revenue?

“I think I can do it,” Stefanowski said in an interview with CT Mirror. “And if I didn’t think I could do it, I wouldn’t say it. I’m not going to put odds on it. I think we can do it. We did it before 1991. We can find other sources of revenue streams.”

The reality is more complex. Before 1991, when Connecticut adopted its tax on wages, the state was reliant on a limited income tax — a 7 percent tax on capital gains and a 14 percent tax on interest and dividends income — as well as much higher sales and corporate taxes.

In 1991, Gov. Lowell P. Weicker Jr. won passage of a budget that imposed a flat 4.5 percent tax on a broad range of personal income, everything from wages to the investment income that already had been taxed and at much higher rates, while lowering the sales tax from 8 percent to 6 percent. The top rate of the income tax on high earners is now 6.99 percent, while the sales tax is 6.35 percent.

So far, Stefanowski has insisted he would not raise other taxes as he phases out the income tax, meaning he somehow would leave Connecticut with fewer taxes than it had in 1991. Stefanowski’s plan also calls for the reduction or even elimination of the 7.5 percent corporate tax. (With a surtax, the effective rate on larger companies is 8.25 percent.) In 1991, the corporate tax was 13.8 percent.

All of Stefanowski’s planned cuts raise another question: If Connecticut eventually has no income tax, a smaller corporate tax, and does not raise or expand its sale tax, then how would the state capture offsetting revenue in a booming economy?

For that, his campaign has no ready answer. 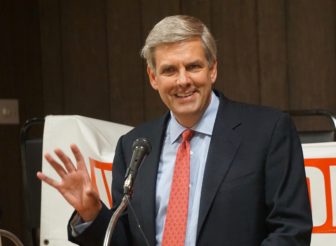 Democrat Ned Lamont has been eager to provide answers. At times, Lamont has treated Stefanowski’s promise to eliminate the income tax as a guarantee, then offered scary examples of what it would mean if state government lost half its revenue, taking talking points from a failed experiment in Kansas to spark growth through deep tax cuts.

On Tuesday, Lamont said it would mean deep cuts in state aid to struggling schools.

Lamont is misrepresenting Stefanowski’s plan by asserting the tax cuts are a sure thing and equating potential lost revenue to specific spending cuts. But an aggressive rebuttal to Lamont could be awkward for Stefanowski. After nine months of emphasizing his intention to slash spending and eliminate the income tax, Stefanowski’s campaign shows no signs of pivoting to a message that says: Hey, none of this certain.

“I should do a better job of articulating that,” Stefanowski said. “I should because Ned comes out and scares everybody that I’m going to rip half the budget out in the first year … which is patently not true. I’m not hiding that.”

He is not hiding it, but nor is his campaign emphasizing it, which leads to the obvious question: Has the Stefanowski campaign made a strategic decision that it is best to keep to a simple message that the candidate is committed to eliminating the income tax, rather than reducing it if economic growth allows?

Patrick Trueman, who sat in on the interview last week with the CT Mirror, quickly noted the limits of what a campaign can say in a standard 30-second commercial. Stefanowski said that debates offer limited venues for him to say his proposed tax cuts are conditional.

“And I’ll even concede I should be highlighting it more, because Ned’s using it against me,” Stefanowski said. “And it is a rational plan. It is over eight years. It is contingent on the economy growing. And I’m not going to rip education out. I’m not going to rip health care out.”

The question of his ability to wring costs out of government prompted a sharp exchange during a debate Thursday with Lamont and Oz Griebel, a petitioning candidate. Griebel shouted at Stefanowski, “You have no solutions, Bob!”

In the interview, Stefanowski talked broadly about his approach to cutting spending, reducing the state’s unfunded pension liability and privatizing some government functions, including the operation of Bradley International Airport and the XL Center in downtown Hartford.

Stefanowski has never worked in government. His last private sector job was as chief executive officer of DFC Global, a position he left in January 2017. He formerly worked at GE and UBS Investment Bank.

He has said he would run the state like a business, an assertion that Griebel called nonsensical during the debate. Governments are not run for a profit; they fill needs, such as education, transportation and caring for the poor, Griebel said.

“When I was at GE, Jack Welch would send out a memo saying, ‘Reduce your budget by 5 percent. Get me the numbers by next Friday. And by the way if you don’t get it to me by next Friday I’ll have someone show up at your desk on Monday, and we’ll do it for you. And trust me you won’t like the way it’s done,’ ”  Stefanowski said. “So I get it, it’s harder in the public sector.”

But he insists the same approach can get results.

“I’ve seen enough examples of areas of abuse that I’m comfortable we can take cost out without cutting to the core,” Stefanowski said. “And you know it’s hard because there’s no silver bullet out there. The biggest silver bullet is the employee pension plan, which we have to look at.”

Connecticut has unfunded pension and retirement health liabilities of about $100 billion.

Stefanowski said he is looking at pension research that was commissioned by David Stemerman, one of the four Republicans he defeated in the GOP primary. In April, Stemerman proposed to emulate General Motors, International Paper and other corporate giants by ending pensions — through negotiation, if possible, or going to court to break contracts, if necessary.

Without saying how much it would cost, Stemerman proposed using a mix of inducements, primarily lump-sum payments, and threats to convince retirees and employees vested in a pension plan to give up their pensions.

“I’ve been doing some work with Stemerman on this, where you could flip that, float a bond, give people an early buyout option voluntarily, give them the opportunity to go to a 401k plan and chip away at that obligation by doing that,” Stefanowski said.

Stefanowski said he would bring state employees to the negotiating table by convincing them that the state pension plan is not sustainable, even if the benefits for current employees are protected by a contract that runs until 2027. Since states cannot use bankruptcy courts, no one has shown a way to renege on benefits owed to retirees, but Stefanowski said that doesn’t mean those benefits are guaranteed.

“You think we’re going to find $100 billion over the next ten years. Really? It’s not going to be there,” he said. “Something’s got to give. That’s the problem with this government. They’re in fantasyland. Well, something has to give.”

Taking calls on WTIC-AM on Friday, Stefanowski reassured a retired teacher that her pension was safe. He said anyone with a relatively modest pension such as the teacher should not worry