SHU/Hearst poll has Stefanowski ahead by 2.4 points 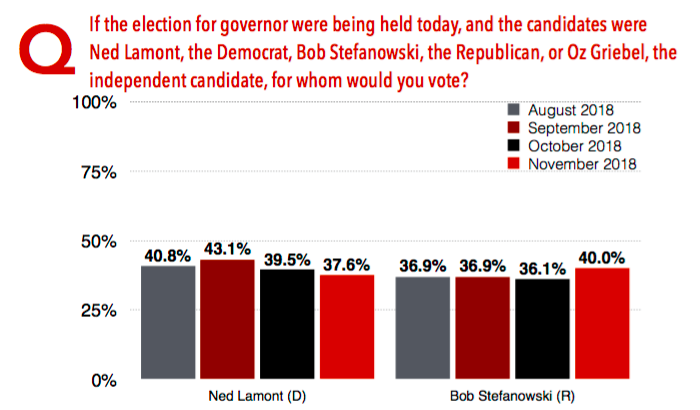 Leads in three of the four SHU/Hearst polls have been within the margin of error.

His lead of 2.4 points is within the margin of error, but Republican Bob Stefanowski nudged ahead of Democrat Ned Lamont for the first time Thursday in a Sacred Heart University/Hearst Connecticut Media poll in the Connecticut gubernatorial race.

The telephone survey found Stefanowski preferred by 40 percent of likely voters, compared to 37.6 percent for Lamont and 9 percent for Oz Griebel. More than 12 percent those surveyed were unsure of who would get their vote on Tuesday.

The poll will be a rallying cry for both major-party candidates, who agree on one crucial point: As is typically the case in open races for governor in Connecticut, the contest will turn on which constituencies and voting blocs are most energized.

Despite the advantage in voter registration, Gov. Dannel P. Malloy is the only Democrat to win a gubernatorial race in Connecticut since 1986, and his margin of victory in 2010 was the smallest in 56 years.

With Griebel’s support twice as large among Democrats as Republicans, Lamont’s chances may turn on his ability to bring home some of the Democrats now supporting Griebel.

The margin of error in the poll of 500 likely voters is plus or minus 4.32 points. It was conducted on Oct. 29, 30 and 31, sandwiched around the last of the gubernatorial debates on the 30th. The poll was the last of four by SHU/Hearst this year.

A Quinnipiac University poll of likely voters released Tuesday showed Lamont with a four-point lead over Stefanowski. It, too, was within the margin of error.

Major differences in the two polls were Quinnipiac finding a much larger gender gap and a lead for Lamont among college-educated voters. Sacred Heart found little difference in support for Stefanowski among voters with or without college educations.

If Quinnipiac follows past practice, it will poll once more before Tuesday. Quinnipiac’s last poll in 2014 was released the day before the election.