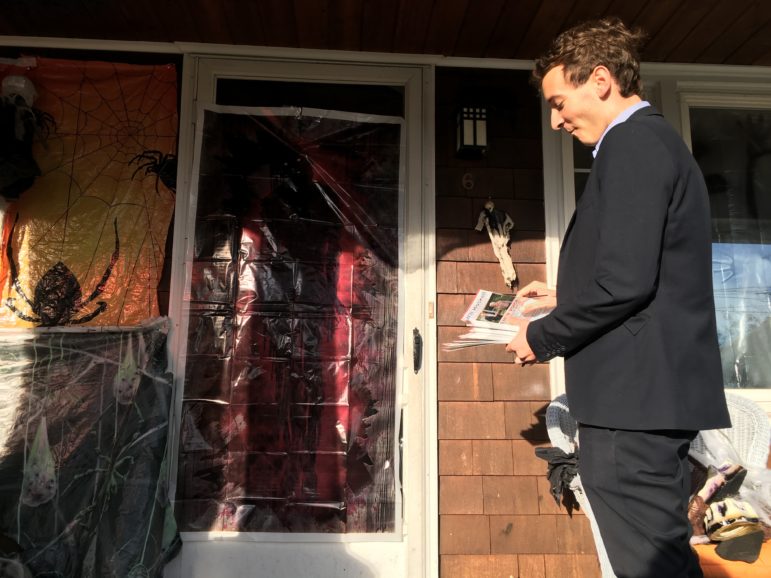 Democrat Will Haskell, 22, door knocks in Westport on Halloween

It was early on Halloween-eve when small superheroes, princesses, and wizards began knocking on the doors of seaside Westport homes. Will Haskell, a newly minted college graduate, was out there zigzagging the streets, too —but unlike the trick-or-treaters, he was after votes, not sweets.

Haskell, a 22-year-old Democrat, has been campaigning relentlessly in an effort to do something some political pundits thought improbable — flip the 26th Senate district seat held by Republican incumbent Toni Boucher. She has served in state office for Haskell’s entire life.

The race is one of the key state legislative contests, as Democrats and Republicans vie to tip the scale on the current 18-18 party split in the Senate on Tuesday.

Boucher has maintained steady control of her seat for a decade, despite local support for Democrats in national elections, most recently for Hillary Clinton by more than 20 percent in 2016, and former President Barack Obama before that.

This gives Haskell some hope that he will prevail tomorrow.

In fact, Haskell said it was the farewell address delivered by Obama, who handed him an endorsement in early October, that partially inspired him to run for the seat.

It was a light bulb moment for Haskell when he heard Obama say, “If you’re disappointed by your elected officials, grab a clipboard, get some signatures, and run for office yourself.”

Those words are even inscribed at his campaign office, a recently shuttered local Chinese restaurant with no heat where he works alongside high school volunteers.

“It is unusual that a young person runs for office but it shouldn’t be if representative democracy [is to] be representative,” Haskell said, as he walked along white picket fences in the Westport neighborhood. “And every day Hartford makes decisions that are going to impact Connecticut for generations to come, largely without the input of the next generation. That’s crazy. I think it’s ill advised.” 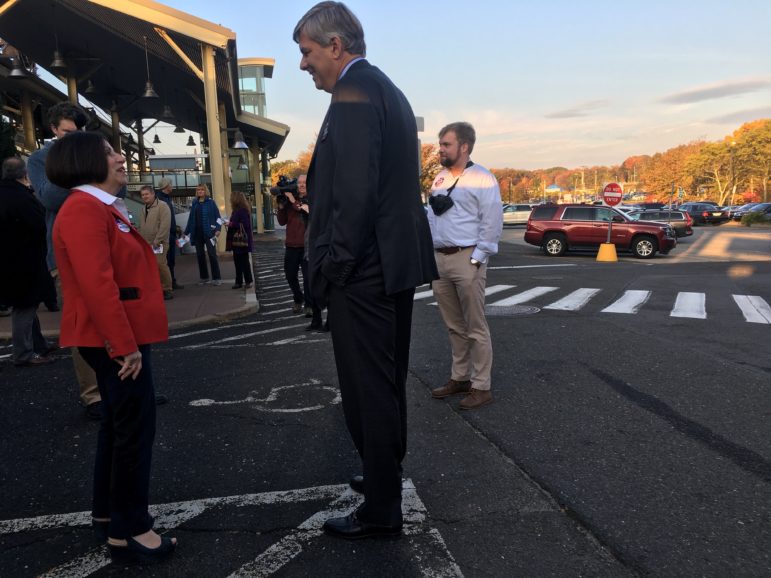 A 68-year-old Republican state senator with considerable seniority, Boucher said she feels positive, but very cautious, about the outcome of the race, noting it is anyone’s game. She serves on the Senate’s Republican leadership, and is a co-chair on the education and transportation committees—two that her opponent is eager to join.

Boucher does not believe her opponent’s age disqualifies him from running for office — “If you have the energy, the drive and the passion to do it then you should go do it no matter what age … it should be age blind,” — but she cautions that experience matters.

“But I do have to say that having the broad life experiences does form your positions and your ability to interact,” said Boucher, leaning close to the wheel of her gray Honda HRV as she drove around Westport. “And even more than that, let’s forget about age, it is about establishing the networks and the relationships to help your district’s problems get [solved].”

Haskell, who describes himself as a fiscal moderate, is hoping to fire up voters on both sides of aisle and corral support from moderate Republicans who don’t identify with President Donald Trump.

For Stacey Henske, a registered Republican in Westport, Haskell represents needed change. Henske, who bumped into Haskell while he was door knocking, told him he 100 percent has her vote.

This is welcome news to Haskell, who said he began his campaign with some self doubt.

“I was so nervous when I started that I was just one voice and that I was too young to make a difference, but you go out and knock on doors, you hold meet and greets, you show people that you’re willing to put in the work and listen to their concerns and you can win over their respect,” Haskell said.

Senate President Pro Tem Martin M. Looney of New Haven said Haskell has displayed a sophisticated mastery of the issues and proven to be an extraordinary candidate in a district that hasn’t usually been competitive for Democrats.

That’s at least partially because of his early experience in politics—including an internship at the Democratic National Committee in Washington D.C. and work on campaigns for U.S. Sen. Chris Murphy and U.S. Rep. Jim Himes. Both lawmakers, together with U.S. Sen. Richard Blumenthal, have endorsed him. 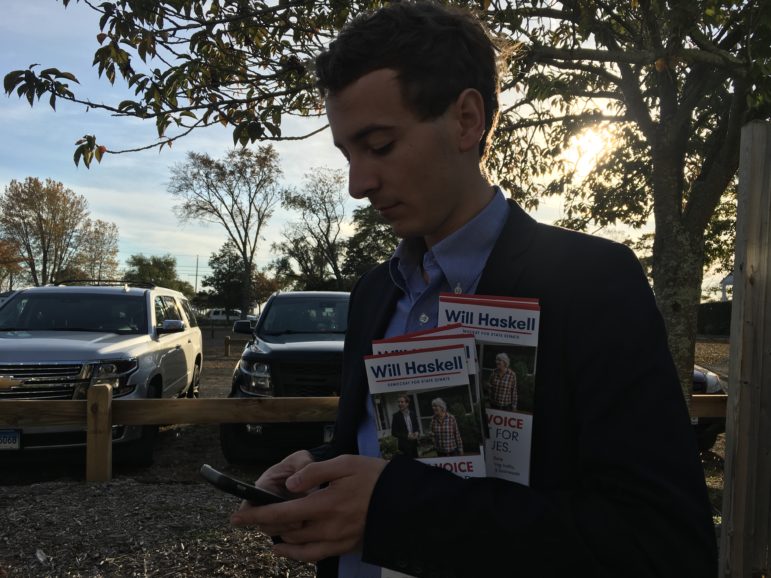 If he wins, Haskell plans to fight for further gun control regulations, a paid family leave law, and improvements to the area’s transportation grid.

Haskell has repeatedly criticized Boucher for not supporting a move towards stricter gun laws, claiming she has said Connecticut went too far in enacting regulations after the Sandy Hook massacre. But Boucher has said her opponent is trying to distort her record, and noted she supported that legislation and other gun control reforms, such as the recently enacted ban on bump stocks.

The recent Georgetown University graduate is also an advocate of tolls, arguing that out of state drivers of trucking companies should have to contribute to the upkeep of the state’s roads.

“That’s the overarching thing about tolls, we’re leaving money on the table at a time when Connecticut just can’t afford to do so,” Haskell said.

He feels similarly about legalizing recreational marijuana which, although not one of his priorities, is another way he thinks Connecticut can generate additional needed revenue while eliminating the need for people to purchase it illegally. 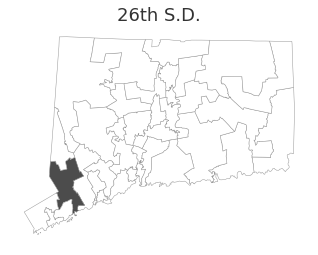 Boucher campaigns most days throughout her district –which includes Bethel, New Canaan, Redding, Ridgefield, Weston, Westport and Wilton – from 5:30 in the morning until late at night before heading home to answer emails. According to her own estimates, Boucher sleeps roughly four hours a night.

On a recent afternoon, Boucher zipped around her district, starting at the Westport train station before heading to local businesses and a diner, and then went door knocking with pamphlets and a zip-lock bag of dog treats in hand.

Boucher, who immigrated to Connecticut with her poor Italian family at the age of five, considers herself an education zealot—often referring to her father’s belief that education is the path out of poverty and towards freedom. The Republican said her number one concern going into the next legislative session would be Connecticut’s economy.

“Some of my very top priorities have to do with solving our budget crisis,” Boucher said. “We really are teetering on economic insolvency for our state.”

J.R. Romano, the Republican state chairman, said he thinks Haskell has misrepresented a lot of Boucher’s record and is trying to capitalize on dissatisfaction with the Trump administration.

Westport resident Brian Senatore told Boucher he is supporting her because he does not think Haskell would help Connecticut become competitive or promote business growth.

“I like seeing young people getting involved, I think that’s a wonderful thing,” Senatore said. “But I just feel like the direction he’s trying to go is more about being negative and anti-Trump and … people’s frustrations with that versus what’s really good for this state.”

Boucher considers herself fiscally conservative and socially moderate. She supports some traditionally Democratic positions like a women’s right to choose, environmental protections and gay marriage, and would also support a ban on ghost guns and 3D-printed firearms. But Boucher opposes tolls and raising the minimum wage, and supports phasing out the income tax. 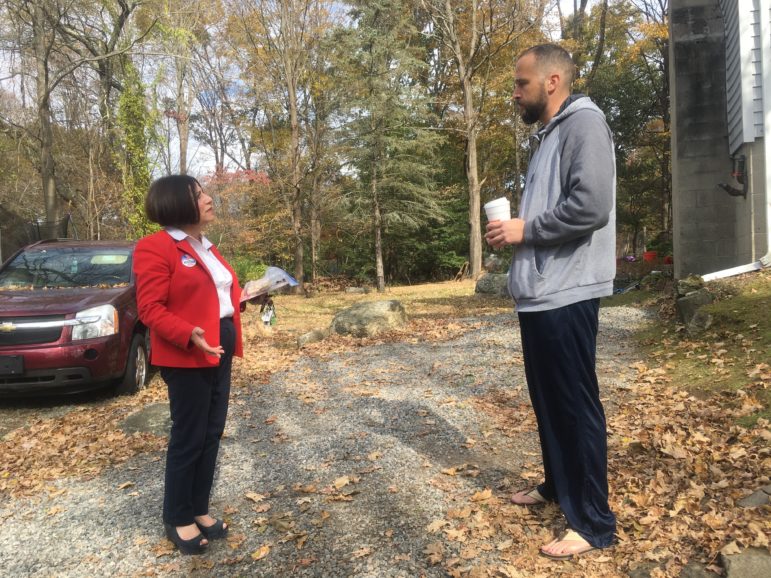 The Republican voted against medical marijuana, but said she likes “seeing that finally there is some science around extracting the positive components of that in a way that doesn’t destroy any of your brain cells or wiring—that is a big concern.” And Boucher opposes legalizing it recreationally, taking the opposite position from her opponent.

“We should be looking at different ways to improve our economic situation, different ways to increase our revenue,” Boucher said. “For me, I only see a higher downside than a plus, and for money to be the reason to do this, I think that is not moral.”

Boucher said negative feelings many Connecticut residents have about  Trump has made the race much more competitive and will likely motivate voters who want to send him a message. She believes Haskell probably would have had a tougher time if Trump wasn’t in office.

“But I think that also a tremendous amount of feedback I’m getting is that this administration has led us down a negative road for the state and we need to turn it around,” Boucher said.

Neither candidate has decided whether they would run again in two years if they lose on Tuesday.

“I don’t know about this race and this seat but I know that I’m dedicated to Connecticut … being in public service and talking to people and listening to people, trying to make their lives better is certainly what I want to do for the rest of my life,” Haskell said.