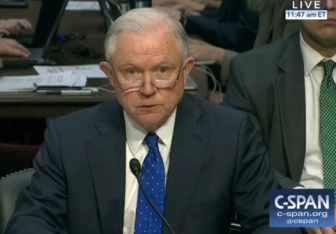 Blumenthal demanded Whitaker, an aide to Sessions, recuse himself from anything to do with Mueller’s investigation and vowed to press forward on a bill aimed at protecting the special counsel.

“This is a break the glass moment,” Blumenthal said. “Replacing the Attorney General with a non-Senate-confirmed political staffer is highly irregular and unacceptable. Protecting the Special Counsel investigation is more urgent than ever. My Republican colleagues must rise to the challenge and show political backbone by demanding that Mr. Whitaker recuse himself from oversight of the Special Counsel’s investigation.”

Trump tweeted on Tuesday that Sessions had resigned at the president’s request and Whitaker would take over the attorney general’s duties in an acting capacity. Whitaker would also assume oversight of Mueller’s probe from Deputy Attorney General Rod Rosenstein, who has been supervising Mueller’s probe into possible Russian collusion with the Trump 2016 campaign after Sessions recused himself.

Blumenthal said, “any attempt to limit (Mueller’s), resources or the scope of his investigation is unacceptable.”

“The world, and history, are watching,” Blumenthal said, and called the resignation “a Saturday Night Massacre in slow motion” — a reference to the resignations of the attorney general and his deputy in 1973 when they were ordered by former President Richard Nixon to fire the chief investigator of the Watergate break-in and cover-up.

Sen. Chris Murphy, meanwhile, pressed another point in a tweet.

“President Trump just removed Jeff Sessions,” said Rep. Adam Schiff, D-Calif., who is likely to lead the House Intelligence Committee since Democrats have won control of the U.S. House. “He wants an Attorney General to serve his interest, not the public. Mueller’s investigation and the independence of the DOJ must be protected. Whitaker and any nominee must commit to doing both. We will protect the rule of law.”

Rep. Jerry Nadler, the likely chairman of the House Judiciary Committee in the next Congress, tweeted “Americans must have answers immediately as to the reasoning behind @realDonaldTrump removing Jeff Sessions from @TheJusticeDept. Why is the President making this change and who has authority over Special Counsel Mueller’s investigation? We will be holding people accountable.”

Trump said a permanent replacement for Sessions would be nominated “at a later date.”