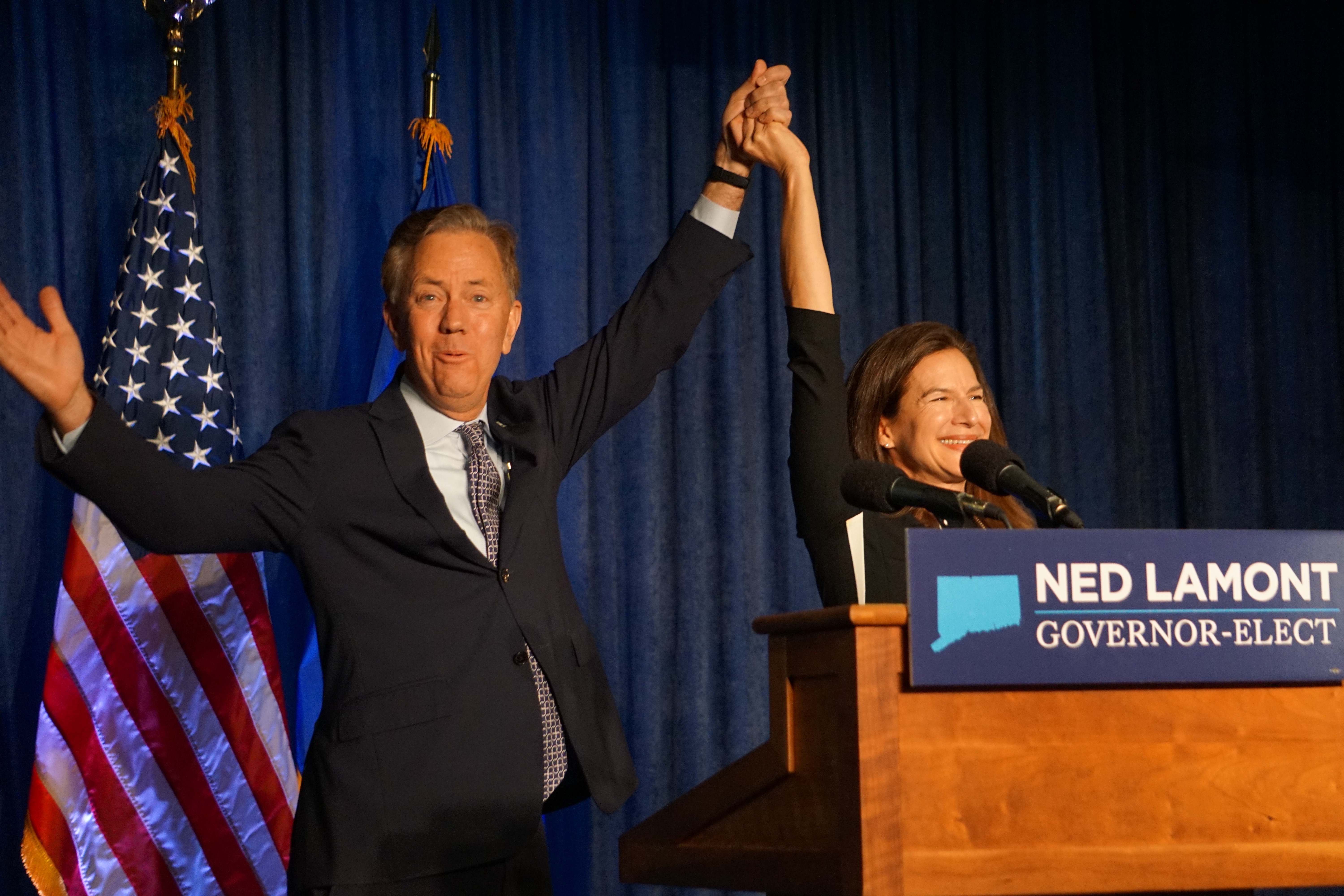 They had to wait a day, but Ned Lamont and Susan Bysiewicz had their celebratory moment.

Ned Lamont, a Democrat lifted to victory in large measure by Connecticut’s rejection of a divisive Republican president, delivered a conciliatory message Wednesday in his first public appearance as the governor-elect, pledging to work with labor, business and the legislature’s wounded GOP minority.

The loser of a nationally watched U.S. Senate race a dozen years ago, Lamont had to wait overnight to claim victory over Republican Bob Stefanowski, who conceded defeat in a phone call at 8:30 a.m. that Lamont called gracious and cordial. Unofficial results showed a vote of 49 percent for Lamont, 46 percent for Stefanowski, and 4 percent for Oz Griebel.

“Elections matter, and I’m reaching out to each and every one of you,” Lamont said. “As I told Bob, I’m reaching out to the folks that supported him and the Oz supporters. I have to bring people together to make sure this is a state that hangs together going forward, making the decisions we need to get this state growing again. And that’s what I mean to do.”

Edward Miner Lamont Jr. of Greenwich, descended from a Wall Street financier and cross-endorsed by the leftist Working Families Party and the Connecticut AFL-CIO, will become Connecticut’s 89th governor on Jan. 9, six days after his 65th birthday. He joins Lowell P. Weicker Jr., John G. Rowland and Dannel P. Malloy in being elected governor with less than 50 percent of the vote.

His greatest asset was Donald J. Trump, who enlarged the electoral map for Democrats in Connecticut, allowing Democrats to win what had been solid GOP legislative seats, including a state Senate district that includes New Canaan and Greenwich.

Lamont, U.S. Sen. Chris Murphy, and the rest of the Democratic ticket targeted the president, offering themselves as “a firewall” between Trump and Connecticut. More than 1.3 million voters turned out, about 200,000 more than the past two mid-term elections.

“I’m so proud we gave people something to vote for,” Lamont said.

If Lamont and his running mate, Susan Bysiewicz had a nail-biter, the election overall produced a stunning Democratic sweep of every statewide office on the ballot, all five U.S. House seats, and strong majorities in a General Assembly where the GOP had known only gains in the past four elections.

Comptroller Kevin P. Lembo and Secretary of the State Denise Merrill won third terms, while William Tong and Shawn Wooden won open races for attorney general and treasurer. Tong, a lawyer from Stamford and the son of Chinese immigrants, is the first Asian American elected to statewide office in Connecticut.

Trump helped Lamont break a historical pattern: In open races for governor, Connecticut voters have refused to elect a successor of the same party for more than century, even longer for Democrats trying to succeed another Democrat.

Lamont belatedly celebrated his victory with brief remarks to supporters in a function room at Dunkin Donuts ballpark in Hartford, then he called his wife, Annie, and their son and two daughters on stage. As they hugged, Trump appeared on a muted television over the bar, beginning his own press conference.

Lamont said he already had called legislative leaders of both parties. His solution for closing a $2 billion budget shortfall is due in February, a month that tends to come quickly for new governors.

“My door is open. And any good idea, let’s go with it,” Lamont said. “I’m going to share the credit where I can. I’ll  take the heat for the tough decisions, but we’re  going to solve this thing by working together.”

Lamont smiled when asked if he had a message for voters who have seen non-stop commercials warning that his election would mean higher taxes and tolls. The Republican Governors Association gave $7 million to a super PAC responsible for the steady diet of attack ads.

“First of all, there won’t be $7 million in RGA ads out there not telling people the truth,” Lamont said. Dropping his voice, he added, “I’m really sorry they wasted all that money, by the way.”

Lamont said he intends to keep his campaign promises.

“We’re not going to raise the income tax. We’re going to slowly reduce the property tax over a period of time,” he said.”I’m going to do everything I can to put electronic tolls just on the tractor-trailer trucks. I’m not changing my message just because it’s the day after an election.”

Democrats have speculated for weeks who might populate Lamont’s inner circle. Two of his former rivals for the Democratic nomination, Jonathan Harris and Sean Connolly, have been part of his campaign. But the only staffer Lamont singled out for praise by name was his campaign manager, Marc Bradley.

Bradley was 26-years-old during the 2006 campaign for U.S. Senate, when he was Lamont’s driver, companion and confidant. Lamont called Bradley his “soul brother.”

He won’t be alone. One concrete measure of his new status is a State Police security detail. About the time Stefanowski conceded, an aide said, the plain-clothes troopers arrived at his room at the Delamar Hotel in West Hartford, where he awoke as the governor-elect. 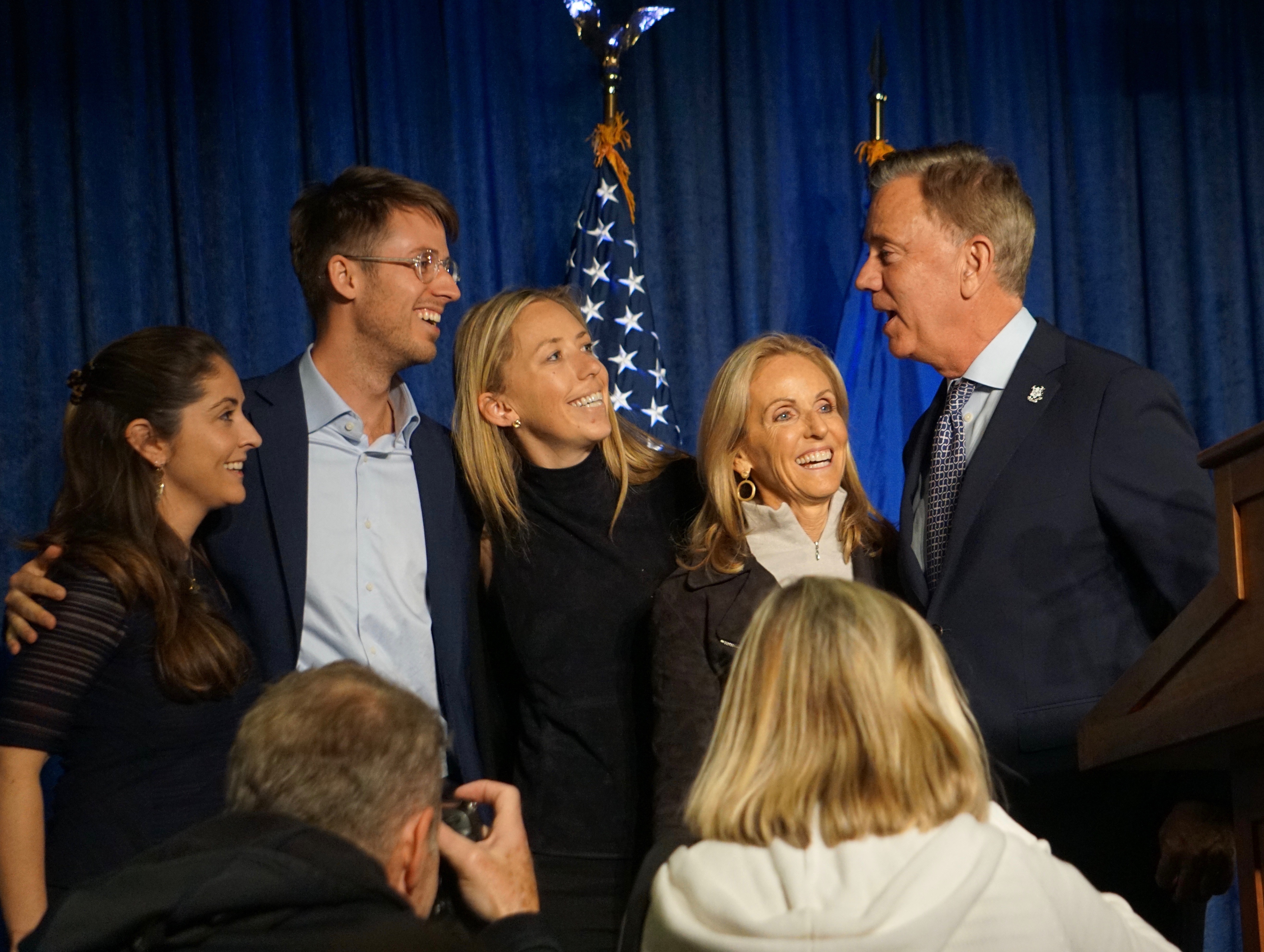 The new first family: From left, Emily, Teddy and Lindsay and Annie and Ned Lamont.