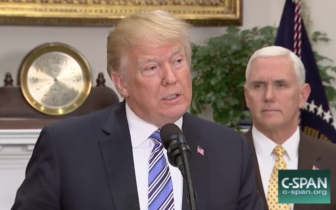 The Trump administration wants insurers that offer plans through Access Health CT, Connecticut’s Affordable Care Act exchange, and other exchanges nationwide, to send people separate monthly bills for the cost of their abortion coverage — in addition to the bill they get for their regular premium costs.

This means people would receive two separate bills in the mail or electronically — one to cover the premium costs for services such as primary care, mental health, maternity, etc. — and another one solely for the cost of their abortion coverage premium.

People on the exchange would also have to make two separate payments for these bills, according to a proposed rule recently released by the Centers for Medicare and Medicaid Services (CMS).

Since the ACA was passed, insurers offering Qualified Health Plans have been required to break out the cost of the abortion coverage in monthly premium bills, but insurers don’t typically send out a separate bill for that cost, said Alina Salganicoff, vice president of women’s health policy at the Kaiser Family Foundation.

Starting in 1977, the Hyde Amendment banned the use of any federal funds for abortion, allowing exceptions only for pregnancies that endanger the woman’s life or that result from rape or incest. This rule is not a permanent law; rather it has been attached annually to Congressional appropriations bills, and has been approved every year by Congress, according to the Kaiser Family Foundation.

The exchange’s policy team was still evaluating how the proposed rule would impact its customers on Thursday.

The two insurers that offer individual plans through the state’s ACA exchange are Anthem and ConnectiCare. Anthem declined to comment on the proposed rule Thursday, and ConnectiCare said all of its plans but one on the individual market cover abortion.

Planned Parenthood said in a statement that the proposed rule is “designed to make it impossible for health insurance plans to cover abortion under the ACA.”

“If finalized, women across the country could lose access to coverage that includes abortion. By the administration’s own account, nearly 1.3 million consumers would be subject to these onerous restrictions,” the Planned Parenthood statement said. “Not only would some plans drop coverage of abortion altogether so as to avoid the administrative burdens and the related consumer confusion, consumers could lose coverage altogether if they failed to follow the new requirements.”

Peter Wolfgang, the executive director of the Family Institute of Connecticut, a nonprofit organization that opposes abortion, applauded the CMS proposed rule.

“It will lead to greater transparency,” he said. “People will at least know what their money is and isn’t paying for, and it’s a step in the right direction of having no abortion funding in Obamacare.”

CMS believes “that requiring issuers to separately bill the portion of the consumer’s premium attributable to abortion services and instruct consumers to make a separate payment for this amount as proposed in the proposed rule is a better interpretation of the statutory requirement for issuers to collect a separate payment for these services,” according to a fact sheet released by the agency about several proposals.

Twenty-six states ban abortion coverage through their exchanges, so this proposed rule wouldn’t affect them, according to the Kaiser Family Foundation.

If finalized, this rule would apply to the insurance year beginning on Jan. 1.

This story was updated at 12:25 p.m. to reflect a clarification from ConnectiCare about its coverage.