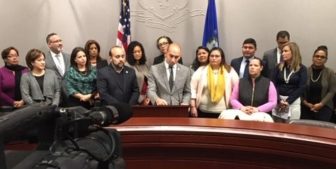 One measure of the larger role Latinos are trying to play in Connecticut politics is the creation of a group announced Tuesday that will work with Gov.-elect Ned Lamont to ensure the representation of Latinos in the incoming administration.

Eight years ago, Latinos made no similar effort as Dannel P. Malloy was assembling the first new Democratic administration in 24 years. The first  appointment of a Latino as an agency head did not come until Malloy named Andres Ayala as commissioner of motor vehicles in December 2014, though he designated a health-care advisor, Jeannette DeJesús, as a cabinet-level appointee in his first year.

Latinos comprise 16 percent of the state’s 3.58 million residents, according to a 2017 estimate by the U.S. Census, and 7 percent of the Connecticut General Assembly. They are a young and growing population.

A study by Secretary of the State Denise Merrill’s office in 2012 found 8 percent of registered voters in Connecticut were Latino, with 51.6 percent registered as Democrats, 39.4 percent unaffiliated and 8.2 percent Republican. By using Hispanic surnames, Merrill’s office identified 157,258 Hispanic voters, including more than 22,000 who registered in 2012. In 2018, the office estimated nearly 17,000 Latinos registered to vote.

Elsa Nuñez, the president of Eastern Connecticut State University, is one of four leaders of the Lamont transition committee. Its members include Jorge Perez, the state banking commissioner, and Rep. Chris Rosario, D-Bridgeport, the leader of the legislature’s Black and Puerto Rican Caucus.

“We know that three people on a committee or a task force do not represent all Latinos in the state,” Soto said.

The new task force announced Tuesday is a network of Latinos involved in politics, law, business, non-profits and labor. Eva Bermudez Zimmerman, a labor organizer who challenged Lamont’s choice of a running mate, Susan Bysiewicz, in a primary, is one of the participants.

Zimmerman said the inclusion of Latinos in the new administration would lead to an increase in voter turnout by Latinos, who traditionally trail other racial and ethnic groups. In 2014, an estimated 27 percent of eligible Hispanic voters cast a ballot, far below the 41 percent turnout rate among black voters and 46 percent rate of white voters.

“Give us a reason, and we’ll vote,” said Zimmerman, who is of Puerto Rican descent.

Marc Bradley, who was Lamont’s campaign manager, said Latinos were an important part of the coalition that elected Lamont.

“During the course of that campaign, I feel like we started a relationship and a friendship that’s going to carry on, not just though this transition period but forward in the administration and beyond,” Bradley said.

To submit a resume to the task force, email them at CTTaskforce@naleo.org.