Murphy scores win in campaign against U.S. involvement in Yemen 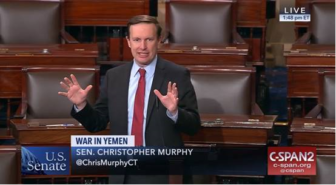 Sen. Chris Murphy speaking on the Senate floor Wednesday about the war in Yemen.

Washington – Sen. Chris Murphy scored a decisive win Wednesday in his campaign to end U.S. military involvement in Yemen, aided by his colleagues’ anger at how the Trump administration is responding to the murder of dissident journalist Jamal Khashoggi.

On a 63-37 vote, the Senate approved moving forward a resolution sponsored by Murphy and Sens. Bernie Sanders, I-Vt., and Mike Lee, R-Utah, that would require President Donald Trump to end support for Saudi Arabia’s military actions in Yemen by pulling all U.S. troops currently in or “affecting” Yemen within 30 days.

“The Saudis are our ally, but we don’t blindly support our friends when their values and interests conflict with ours,” Murphy said. “The Saudi war in Yemen has gone off the rails and their disregard for human life has become impossible to ignore. Today’s breakthrough vote in the Senate is a signal to the administration that they must quickly reorient their policy toward Saudi Arabia or Congress will do it for them.”

The White House issued a veto threat of the legislation Wednesday evening, saying it “would harm bilateral relations in the region and negatively impact the ability of the United States to prevent the spread of violent extremist organizations such as Al Qai’da in the Arabian Peninsula and ISIS in Yemen.”

But, in a floor speech, Sanders said the vote on the resolution was “one of the most important foreign policy votes that we have cast in recent years.”

“It is a vote that will tell the despotic dictatorship in Saudi Arabia that we will no longer be part of their destructive military adventurism,” Sanders said.

Key senators who voted against a similar measures in 2015 and, more recently, in March voted Wednesday to allow the resolution to proceed, aiming to send a message to Saudi Arabia that U.S. support should not be taken for granted.

The vote occurred hours after senators received a closed-door briefing Wednesday from Secretary of State Mike Pompeo and Defense Secretary Jim Mattis on what the administration knows about Khashoggi’s murder in October at the Saudi Arabian embassy in Turkey. They were angered that the session did not include CIA director Gina Haspel, whom they wanted to question about the agency’s assessment that Saudi crown prince Mohammed bin Salman orchestrated Khashoggi’s murder.

Trump and Pompeo, however, have defended Saudi denials that the crown prince was involved in Khashoggi’s death.

Haspel has traveled to Turkey to listen to a tape recording of Khashoggi’s murder and review evidence in the case.  Trump, Pompeo and national security adviser John Bolton have all pointedly said they have not listened to the tape, and say there is no reason to do so.

One key GOP senator said he would withhold his support for other measures until Haspel briefs the Senate.

“I am not going to blow past this,” said Sen. Lindsey Graham, R-S.C. “Anything that you need me for to get out of town — I ain’t doing it until we hear from the CIA.”