A night for goodbyes, celebration — and a little intrigue 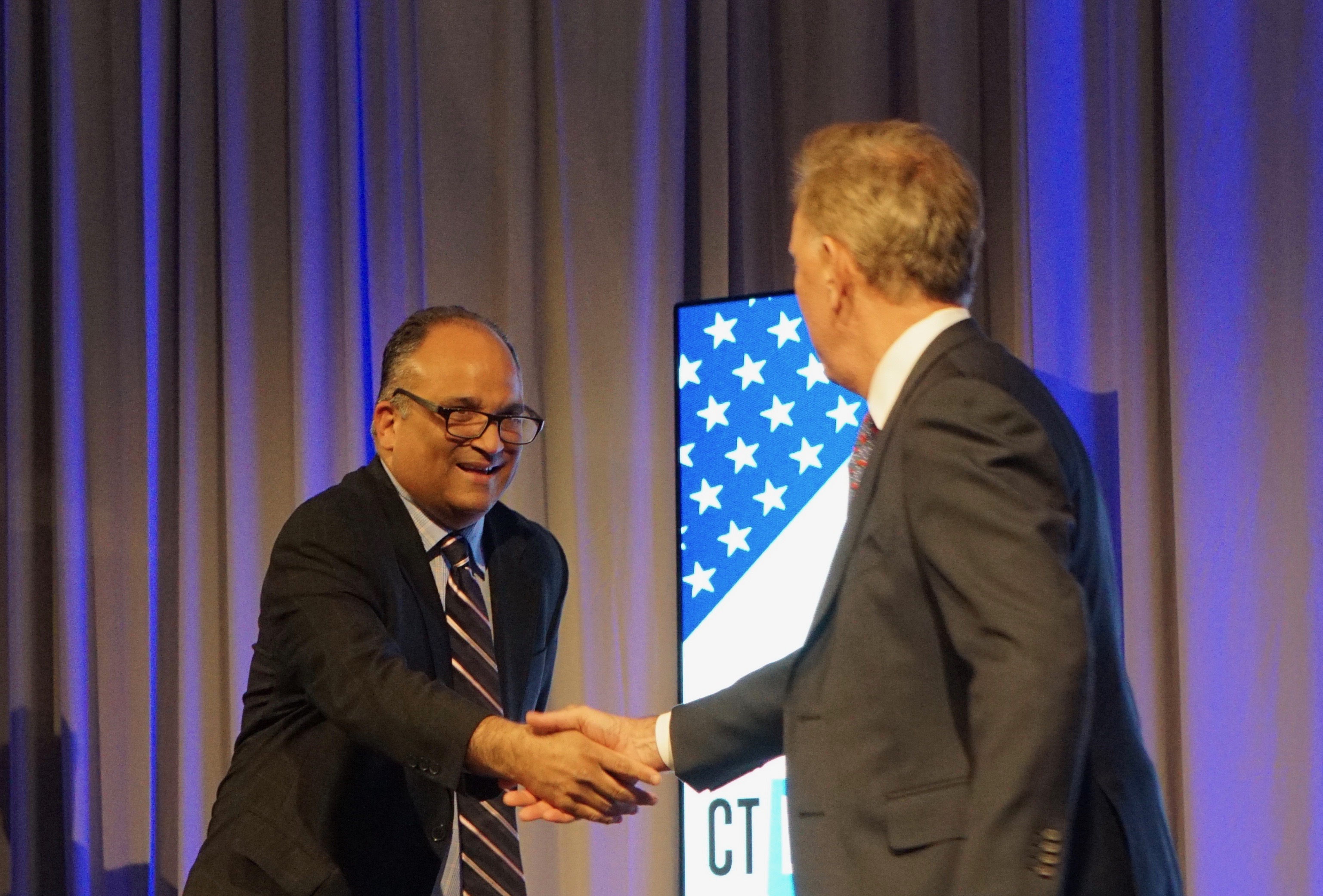 Gov-elect Ned Lamont and Nick Balletto, the state Democratic chairman he has declined to endorse for re-election, politely shared a stage Monday, ignoring the question of Balletto’s future as they bade farewell to the man Lamont succeeds next month, Gov. Dannel P. Malloy.

Malloy, who kept a strategic distance from Lamont during the campaign in recognition of his own low job-approval numbers, embraced the governor-elect, saying he was confident in Lamont’s ability to continue his administration’s successes, notably an end to chronic homelessness and a wide range of prison and criminal justice reforms.

“That’s all work that is going to be carried on by one of the most decent people I have ever worked with in politics, and that’s Ned Lamont,” Malloy told the crowd of several hundred at a $125-a-ticket party fundraiser in a ballroom at the Connecticut Convention Center in Hartford.

Lamont returned the favor, saying, “Dan Malloy is leaving this state in much better shape than he found it.”

Malloy inherited a deficit of nearly $3.7 billion when he took office eight years ago, months after the state began its painfully slow recovery from the Great Recession of 2008. The private sector has grown by 100,000 during Malloy’s tenure, but economic growth here still lags much of the U.S.

It was a night for goodbyes, stories told over drinks, and precious few speeches. Lamont, Malloy, his wife Cathy, and Lt. Gov. Nancy Wyman shared a table that attracted a steady stream of well-wishers for Lamont and Malloy. Among them was Roy Occhiogrosso, a strategist for Malloy’s losing effort in 2006 and his victories in 2010 and 2014.

“This has been a privilege,” a relaxed Malloy told the crowd, thanking his wife, then adding with a smile, “There is another woman in my life, Nancy Wyman.”

The governor paid the governor-elect a compliment that sounded more like a curse: “No one’s going to do a better job over the next four years, eight years, 12 years, 16 years than Ned Lamont.”

Lamont smiled at the reference to four years and seemed noncommittal about eight. At the mention of 12 and 16 years, Lamont’s eyes widened theatrically. He mimicked holding a pistol to his head and pulling the trigger. His table mates laughed.

Malloy and Lamont developed an understanding during the campaign. Malloy told Lamont to freely criticize him, promising he would not take offense, and Malloy did his best to stay out of the news.

The governor has made no secret of his pride — not to mention relief — that he will leave office as the first Democratic governor in Connecticut in more than a century to be succeeded in an open race by a fellow Democrat.

On the question of Balletto, Malloy similarly made no effort to crowd his successor.

Balletto was Malloy’s choice as state chairman, but the governor said whoever is elected or re-elected next month by the Democratic State Central Committee should have the full confidence of the next governor

“What I strongly believe is that a Democratic governor of the state should run the party, or at least play a role in deciding who that is, and should have somebody that they are personally comfortable with,” Malloy said in an interview. “I always did.”

Lamont and Balletto steadfastly declined to address the question of whether he would or should stand for re-election. Balletto was openly dubious about Lamont’s ability as a candidate in the early months of the campaign.

On stage Monday night, Balletto said Lamont “already has brought people to the table,” unifying the party as it prepares for Jan. 9, when Lamont takes office with an all-Democratic slate of statewide constitutional officers and solid Democratic majorities in the General Assembly.

“I have no doubt that as governor Ned will fight tirelessly for our families, stand up for our rights in the face of national attacks against our values,” Balletto said. “He already is proving he has the skill set we need to move Connecticut forward.”

On one point he and the governor-elect agreed: The night was to celebrate the victors and bid farewell to the Democrats who did not seek re-election — Malloy, Wyman, Attorney General George Jepsen and Treasurer Denise Nappier.

Lamont said, “I just think tonight’s about a celebration of a big Democratic victory which a lot of people thought was impossible a year ago.” 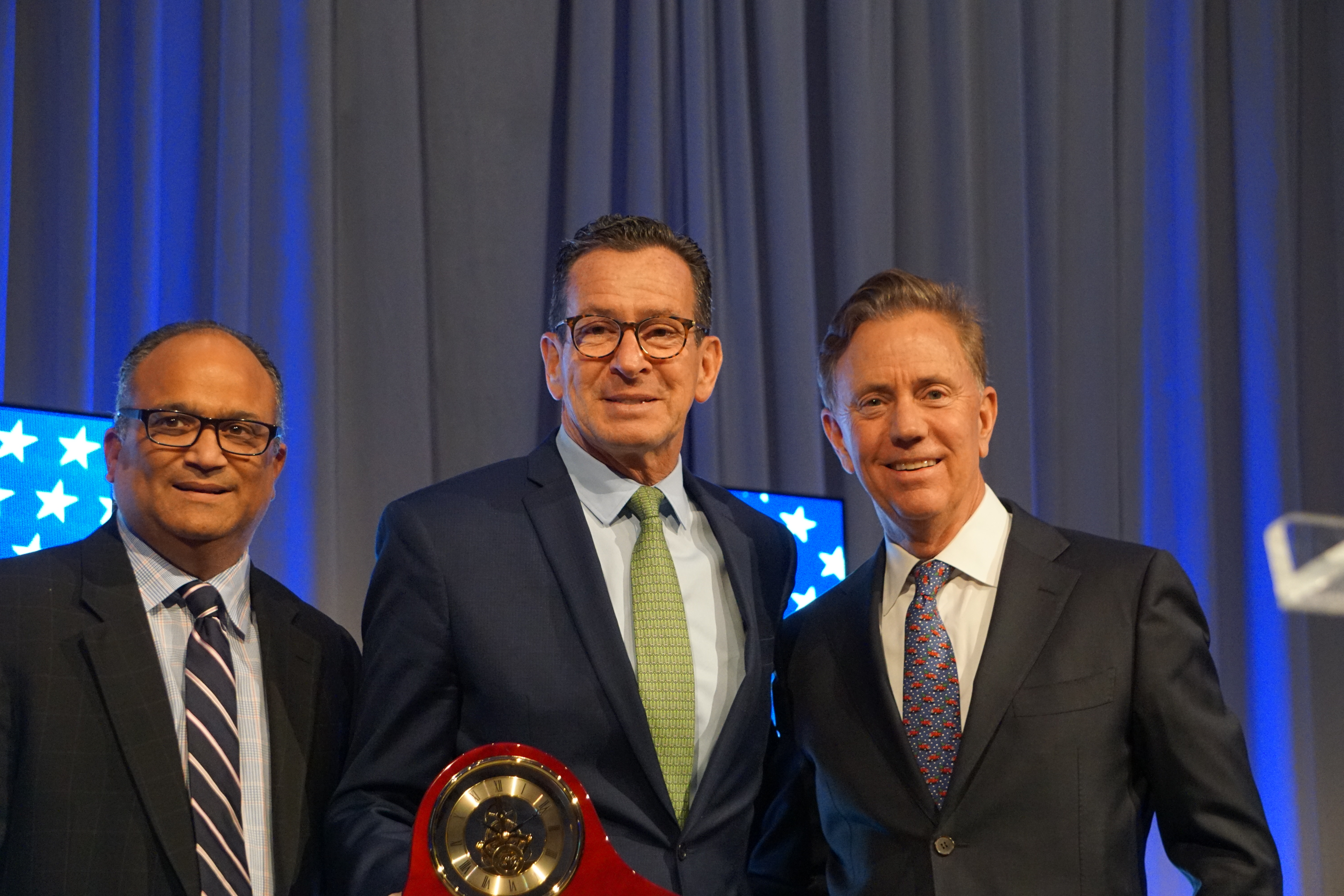