A kiss, some kind words — and a dismissal of a Democratic chair

Gov.-elect Ned Lamont and Democratic State Chairman Nick Balletto introduced Lt. Gov. Nancy Wyman on Thursday as Balletto’s successor, bringing an upbeat conclusion to a drama that threatened to distract from Democrats’ campaign victories and paint Lamont as politically inept as he prepares to take office next month as Connecticut’s 89th governor.

“I’m here to salute the great work that Nick did and also say it’s time to turn the page and have a fresh chapter for the state party here in Connecticut,” Lamont said. “That’s why I asked Nancy Wyman if she would consider being our chairperson. Thankfully, she said, ‘Yes.’ ”

The joint press conference a few blocks from the State Capitol at the Lyceum in Hartford was a show of unity that belied a month of tension between the governor-elect and state party leader, who initially was dismissive of Lamont as a candidate.

The dispute grew from missteps by both men: Lamont failed to extend Balletto the courtesy of a direct answer when the chairman asked for his support after Lamont’s election; and Balletto misread Lamont’s silence as indecision, a sign the governor-elect might back down in the face of a fight.

Over a dinner Wednesday night of clams casino for Lamont and pasta for Balletto at Portofino’s Restaurant in New Haven — where the two men shared an awkward lunch in June to smooth over differences — a script was developed for the unity news conference in a balcony overlooking an auditorium decorated for Christmas. 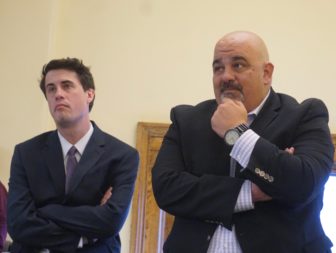 “I’ve been in politics my entire life, and these last few years might have been the proudest and the biggest honor I’ve ever had,” said Balletto, who struggled to remain composed.  “We were able to bring together all the activists to channel the anger after the 2016 election and turn it to action that put our candidates over the finish line in November.

“After each election there are changes,” Balletto said. “I couldn’t ask for a better, more qualified successor than Nancy Wyman.”

Wyman thanked Lamont for his confidence, then returned the compliment to Balletto.

“You have been a great leader, and I really do appreciate it,” Wyman said to Balletto. “You are that foundation we are going to grow on.”

Lamont denied the dismissal was the result of tension between him and Balletto.

“Nick and I worked together like this,” Lamont said, holding up two fingers held together. “After that primary he was great leader for the party, but we’re starting up a new government, and I thought it was time to make a change here.”

Elections of state party chairs are an insider’s game, especially for the party that holds all  levers of power in Connecticut: For the third time since 2010, Democrats won every statewide and congressional office and picked up seats in the General Assembly for the first time since 2008.

Balletto was elected unanimously by the Democratic State Central Committee in January 2015 as the choice of Gov. Dannel P. Malloy. Balletto’s term expires later next month, a few weeks after the governor’s.

Without a working relationship with a governor of his own party, Balletto would have had a title without influence, even had he convinced the Democratic State Central Committee to re-elect him.

The last party chairman to survive a governor’s desire for new party leadership was William A. O’Neill, who succeeded the legendary political boss, John M. Bailey, with the endorsement of Gov. Ella T. Grasso after Bailey’s death in 1975. But the next year, looking ahead to re-election in 1978, Grasso backed Peter Kelly, a skilled fundraiser.

O’Neill refused to yield and won the showdown with his re-election by the Democratic State Central Committee, but he did so with a significant political base: At the time, O’Neill was the majority leader of the state House of Representatives.

The breach with Grasso did not stop O’Neill from becoming Grasso’s running mate when she won re-election in 1978.

Wyman is faced with a decision about what roles she will fill as party chair. Will she be the party’s lead fundraiser? Will she oversee a revamping of its infrastructure, such as management of a volunteer base that grew substantially during the 2018 election cycle?

She said Thursday she would like to improve outreach to younger voters.

At 72, Wyman had indicated to friends she was not ready to become a full-time grandmother after 32 years as a state legislator, state comptroller and lieutenant governor, though she is close to her children and grandchildren.

Bysiewicz, who will succeed Wyman as lieutenant governor, said there will be no better ambassador for Democrats.

“She has been to every corner of this state” Bysiewicz said. “There is no one that is more liked within our party than Nancy Wyman.”

Malloy, who was appraised of Lamont’s intentions before they became public, issued a statement thanking Balletto and praising Wyman, the woman he twice pursued as his running mate, unsuccessfully in 2006 and successfully in 2010, when he defeated Lamont in a primary.

“I have often said that Nancy Wyman’s decision to abandon a safe re-election to the comptroller’s office to join my campaign is the best thing that ever happened to me politically,” Malloy said. “That remains truer now than ever.  I could not ask for a better friend and partner in government, and there is no one better prepared for the challenging and often thankless job of party chair than Nancy.”

She long has been Connecticut’s happy warrior, being partisan without being unpleasant. On Thursday, she already performed one great service for the governor-elect, ending an intra-party spat by accepting his invitation to become the second woman to lead the Connecticut Democratic Party.

Before the change of guard: Center is Gov-elect Ned Lamont with aides, Rob Blanchard and Lacey Rose. At right is Nancy Wyman Behind Lamont, Nick Balletto talks to his executive director, Mandi Lewis. At left is Lamont’s chief of staff, Ryan Drajewicz.