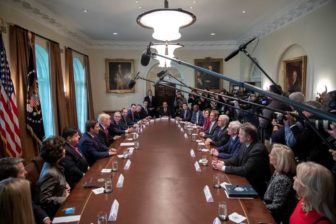 Governors-elect met with President Trump Thursday at the White House.

Washington – Connecticut Gov.-elect Ned Lamont declined an invitation tendered to all the nation’s new governors to meet with President Donald Trump Thursday to discuss how the federal government could help their states.

Lamont, a Democrat, was too busy with transition issues to attend the roundtable, said his  spokeswoman Lacey Rose.

“Governor-elect Lamont is not at the White House today, but plans to meet with President Trump in February at the (National Governors Association) conference,” Rose said. “The governor-elect has roughly eight weeks to stand up an administration that is ready to govern Day 1.”

Rose also said Lamont “is remaining in close touch with our congressional delegation and D.C. office director to make sure Connecticut has a seat at the table on issues of importance in the state.”

Meetings with cabinet officials were also on the schedule, the official said.

Trump’s meeting with the newly elected governors comes as the White House and congressional Democrats have hit an impasse in their negotiations to fund the government.