Lamont promises to be a criminal-justice reformer 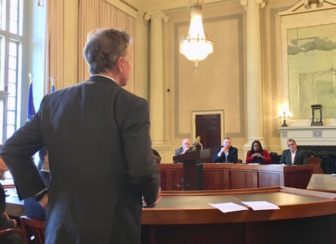 Gov.-elect Ned Lamont opened his campaign for governor in January without a deep appreciation of the criminal-justice reforms undertaken by the administration of Gov. Dannel P. Malloy. On Tuesday, he promised to take office next month with the ambition of improving on Malloy’s substantial record.

“For me, criminal justice reform is so important. It’s the right thing to do, and it’s the smart thing to do,” Lamont said, addressing a criminal-justice policy group co-chaired by Cathy Malloy, a reform activist. Turning to the first lady, Lamont said,  “This is something we’re going to continue to do in a serious way.”

Fifteen policy groups organized by his transition team began making their policy recommendations Monday, with five reports released every day for three days. The criminal-justice presentation Tuesday is only one of three Lamont intends to accept personally.

“We have these policy teams, and it’s incredibly hard work that people are putting in and it s not going to go to waste,” said Lamont, a Democrat. “This is one I really wanted to go to.”

Criminal-justice reforms were a wedge issue during the campaign to succeed Malloy, a two-term Democrat who did not seek reelection.

Lamont and petitioning candidate Oz Griebel published outlines on criminal justice issues, and in debates they generally applauded the legislative and executive policies pursued by Malloy under the umbrella of what he calls his “Second Chance” initiatives, which are part of a national reassessment of an era of mass incarceration.

Republican Bob Stefanowski ran to the right of Lamont, criticizing the Department of Correction’s good-time credit program and ignoring a challenge by the ACLU to join the other candidates in publishing a criminal-justice platform. Criminal-justice advocates were generally pleased by Lamont’s stands during the campaign, while urban Democrats faulted him for not giving them greater emphasis.

On Tuesday, Lamont called mass incarceration “a terrible experiment” and pledged his commitment to policies intended to save people from criminal records where possible and offer rehabilitation aimed to reducing recidivism for those go to prison.

“I came here because I learned a lot over the last year in terms of the fact that Connecticut’s been a real leader on these reform efforts,” Lamont said. “I’ve seen firsthand what a difference is made in a lot of people’s lives, especially young people — made a terrible mistake when they were younger, and they serve their time. And they shouldn’t be punished for life. So it’s the right thing to do and the smart thing to do.”

His ambitions will be challenged by fiscal constraints. Current projections show he will face a $1.7 billion budget shortfall in his first year — less than half the shortfall Malloy had to confront eight years ago, but still considerable.

Correction Commissioner Scott Semple, a data-driven reformer who is retiring after 30 years in the Department of Correction, said further advances in reducing recidivism will require some investments, such as as adding teachers. The highest rate of recidivism is among inmates who leave prison without at least a high-school degree.

James Forman Jr., a Yale law professor who co-chaired the policy group, cited a RAND Corporation finding that every dollar spent on vocational training and general education in prison yields $4 or $5 in savings from lower rates of incarceration in the first three years after an inmate’s release. 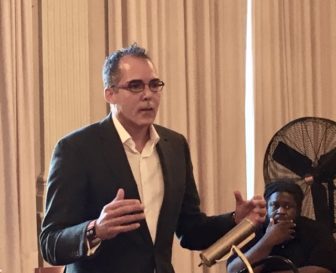 Rep. Toni Walker, D-New Haven, a transition team leader and the co-chair of the legislature’s Appropriations Committee, told Forman that anything that saves money will get a quicker hearing by lawmakers.

Forman, a volunteer teacher in prison as well as an academic who studies criminal justice policies, said investing now will yield savings. “We’re not going to save it tomorrow, but it’s not going to be in 40 years,” Forman said.

Forman won the Pulitzer Prize this year for his non-fiction book, “Locking Up Our Own: Crime and Punishment in Black America.” He said the invitation by the governor-elect to advise the transition came at one of the busiest times of the academic year, and the process was necessarily frantic.

But he said he appreciated the opportunity to shape public policy.

The policy group’s policy recommendations and supporting data filled a thick binder, copies of which were not released. But a two-page summary warned Lamont that tough-on-crime attitudes that led to mandatory minimum sentences for many crimes, including non-violence drug possession, have not entirely disappeared.

“These attitudes must be countered by strong smart-on-crime leadership from the top on down. Data should guide us, and justice-involved individuals and their families can place a human face on the urgency of reform,” they warned in the summary. “Support for reform exists on both sides of the aisle and among a diverse range of people in the state. Policymakers must understand that some spending is necessary to maximize long-term savings, and justice reinvestment is required to keep crime rates low.”

They recommend Lamont introduce several criminal justice reform bills at the start of the 2019 legislative session, several pursuing reforms attempted by Malloy. They favor the legalization of marijuana and, among other proposal, wiping clean the records of persons with simple possession convictions.