No surprise. This is not a governor to go gentle

An afternoon interview with Gov. Dannel P. Malloy in his office.

The topic is awkward, if expected. Without being asked, Gov. Dannel P. Malloy brings up the low poll numbers destined to dog him into political retirement, saying unpopularity was an inevitable consequence of an ambitious agenda he carried into office eight years ago, confronting a record deficit and a fragile economy.

Consequences are passive. And this governor can live with most any label but one that suggests acquiescence. No, Malloy says, his unpopularity was a choice made time after time, not a consequence.

“I purposely chose to be unpopular,” Malloy said. “I did every time I took up an issue that someone else had failed to take up. I knew what the response was going to be. And you haven’t talked to a politician who can answer that question in that way. I wasn’t afraid of it. It doesn’t mean I enjoyed it. But I was absolutely not afraid of it. That’s the difference.”

As time runs out on his elective career, he is not exactly raging against the dying of the light. But he’s not one to go gentle, either.

It is legacy week for Malloy.

In half-hour increments, the state’s first Democratic governor in 20 years has conducted a series of exit interviews timed to the release Thursday of a detailed account of his tenure by his communications office, evidence of a man intent on shaping his legacy, even as he insists he can live happily ever-after without broad public approval.

Everything is a lot. Everything includes two of the biggest tax increases in Connecticut history, though not the biggest, as his critics incorrectly describe them. Everything requires a report with a five-page table of contents. Everything sprawls across 223 pages, not including an appendix with all eight State of the State addresses.

He came to office as the winner of Connecticut’s closest gubernatorial race in 56 years. He was re-elected without ever breaking 50 percent in any poll. Malloy said he will leave office at peace with his record, even if bruised by millions of dollars in Republican campaign ads this year that portrayed him as the sole source of the state’s ills, even when he was not on the ballot.

“I measure myself by what we accomplished, not how well it’s known or understood or appreciated,” Malloy said, seated at a table in a corner office he vacates in three weeks. “And I can assure you I’m not going to spend any time after the 9th of January wondering when I’m going to be loved. It’s not going to happen.”

Malloy, 63, a former New York City prosecutor and Stamford mayor, a man who has variously described himself as prickly and pugnacious, and impatient at times with the pace of an 187-member General Assembly, chose to conduct his final formal  interviews as governor in a multi-day marathon.

His official portrait by Connecticut artist Chris Zhang will be unveiled at 5 p.m., an event that typically comes months into retirement for most governors, giving them a chance to return to the public stage in a softer light. Not Malloy. By day’s end Thursday, the press will have its take and his portrait will hang across from the Capitol in the Museum of State History.

He is ready to leave.

Renovations to the home in Essex he and his wife, Cathy, purchased last summer are nearly complete, though Malloy curtailed the scope of the work to avoid temporary homelessness after they vacate the Executive Residence, an elegant brick Georgian Colonial in Hartford’s West End.

Sometime after noon on Jan. 9, his State Police security detail will disband, leaving Malloy without a car and armed driver for the first time in eight years. He is looking forward to time alone in a car, a small luxury he misses.

He will give his successor, Democrat Ned Lamont, space to govern, freedom to find his own way. Malloy largely went silent during the gubernatorial campaign, knowing that Republicans were intent on making the campaign about Malloy, as they did in 2014 — when the GOP was certain of victory and Malloy was expecting defeat, at least until the final month.

It took eight months, but he negotiated concessions from state employees his first year. He infuriated teachers his second year by, among other things, trying to curtail tenure. He warred with package-store owners, stripping them of anti-competitive measures that limited hours and days of operation. And he raised taxes — $1.8 billion his first year, when he inherited a budget shortfall of $3.7 billion.

He knows many people think the concessions too little, the taxes too much.

Sandy Hook came at the mid-point of his first term. On Dec. 14, 2012, Malloy sped from the Capitol across the state to Newtown, beginning the trip with the knowledge children had been shot and arriving to find an unfathomable toll: 20 first-graders and six staffers dead, victims of a disturbed young man armed with an AR-15 rifle and 30-round magazines. Malloy went to war with the NRA, demanding passage of one of the toughest gun laws in the U.S., even as he made enemies in the General Assembly when he complained of foot-dragging.

Malloy opened his 2014  re-election campaign with only 44 percent of voters saying he deserved a second term. 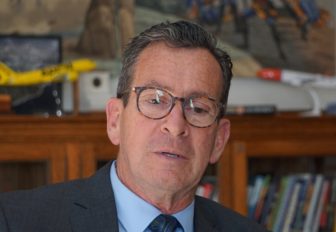 “I was genuinely surprised when we got to October and it appeared that I would win,” he said. “So I think I lived through almost all of my first term expecting that I would not be governor beyond four years. And I behaved that way. I had a short time to do as many big things as I could. And I didn’t have a lot of time for pleasantries.”

He smiled, hesitating every so briefly before saying “pleasantries.” It was a satisfied smile, the smile of a man who has reached the finish line, who is beyond any fear of reproach.

Malloy is leaving Lamont with a projected budget shortfall of $1.7 billion, considerable, but less than half of what greeted him on Jan. 5, 2011.

Unlike Malloy, Lamont will take office with budget reserves of about $2 billion. Unemployment is down from 9.3 percent in December 2010 to 4.2 percent in October 2018. Economic growth has lagged behind the U.S., but the private sector has added more than 120,000 jobs since the end of the Great Recession.

Sikorsky Aircraft and Pratt & Whitney have signed economic development deals that should stabilize the state’s aerospace industry for the next generation. The more immediate challenges for Pratt and Electric Boat are filling all their advanced manufacturing jobs.

“No one in the public knows that we have the highest number of private sector employees in our state’s history,” Malloy said. “They don’t know it, because people lied about it, and those lies got repeated. Every candidate who ran for governor talked about how Connecticut was bleeding jobs. If adding more jobs than any other governor has added, on a sustained basis, is bleeding jobs — it’s  a whole new definition.”

Crime is down, falling faster than nearly ever other state. The prison population also is falling rapidly. His administration’s criminal-justice reforms have garnered national attention, including a “60 Minutes” report expected this season.

“Everyone says, ‘Oh you know you’re going to be appreciated when you’re gone.’ That sort of thing,” Malloy said. “I’m not sure that that’s going to happen. But I can sleep at night. I’m happy.”