Two CT snapshots: Personal income is up; unemployment down 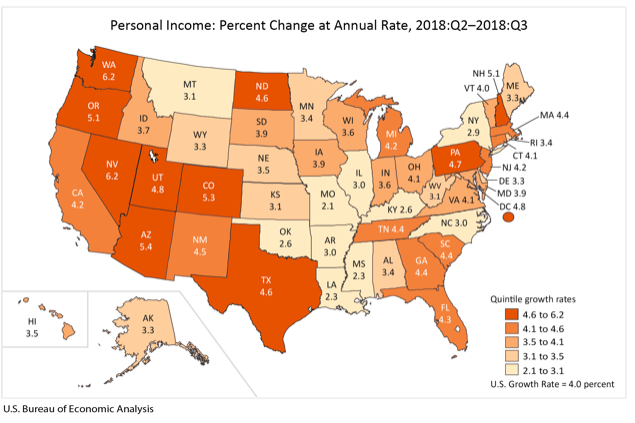 Unemployment in Connecticut fell to 4.1 percent in November, while personal-income growth in the state matched or exceeded national growth for the second consecutive quarter, according to economic reports released Thursday by state and federal agencies.

The state Department of Labor’s monthly jobs report found that unemployment in November fell by one-tenth of one percentage point to 4.1 percent, with the U.S. rate was unchanged at 3.7 percent. The report relies on data from federal surveys of households and business payrolls.

The household survey found 2,300 fewer unemployed residents than in October, while  while the payroll survey found a net job loss of 500 for the month and a net gain of 23,000 jobs for the year.

“It is clear that Connecticut’s labor market continues to tighten,” said Andy Condon, Director of the Office of Research.  “Our unemployment rate continues to trend down into full employment territory, and nearly all industry supersectors are showing annual growth.”

The private sector has out-performed the government sector by regaining 128,500 jobs, which is 115 percent of the private jobs lost in the recession.