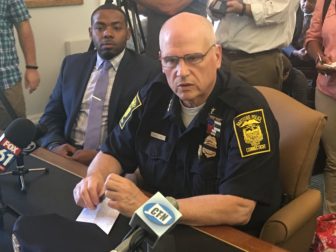 James Rovella when was chief of HPD.

Gov-elect Ned Lamont named a public-safety team Friday that will be led by former Hartford police chief James Rovella, who will oversee the state police, homeland security and state crime lab as commissioner of the Department of Emergency Services and Public Protection.

Rovella’s top deputies will be Stavros Mellekas, who will command the state police as its colonel, and Regina Rush-Kittle, a former state police major and Army Reserves command sergeant major who will be the deputy commissioner with day-to-day control of homeland security and emergency management.

“James, Regina, and Stavros are experienced law enforcement officers, having dedicated their lives to keeping our streets and communities safe in Connecticut,” Lamont said. “I am proud to welcome these three dedicated public servants to my administration’s leadership team. Together, we are deeply committed to making sure our state remains a great place to live, work, and raise a family.”

By announcing a leadership team, the Lamont administration is forestalling the jockeying that often comes over the position of state police colonel when a new commissioner is named. Rovella and administration officials said the choices of Mellekas and Rush-Kittle were made collaboratively.

Rovella, 60, retired in February as the Hartford police chief, took eight months off to work on his sons’ homes and returned to law enforcement in November at the state Department of Energy and Environmental Protection. Accepting the new post was an easy decision, he said.

“How do you say no to this? It’s a great opportunity, a great state to serve,” Rovella said in an interview. “I’m not one of those guys who are gloom and doom.”

Rovella the new team take over at a time when state police staffing is down, and the Connecticut State Police Union is pushing for new hires.

Andrew Matthews, the executive director of the union, applauded the appointments and the speed with which they were made.

“We’re excited. It’s going to be a fresh start. They have a lot of experience,” Matthews said. “I know Mellekas is well-qualified. He is respected by the troops as someone who has risen through the ranks and is deserving of being our colonel.”

Rovella was a homicide investigator at HPD, then spent a dozen years as inspector and chief inspector at the chief state state’s attorney’s office. He returned to Hartford as its chief in 2012. Over the course of his career, Rovella said, he often crossed paths with Mellekas, who has held a series of leadership posts, including barracks commander.

He said they met on a homicide case jointly investigated by Hartford and state police.

Mellekas, a 25-year state police officer with the rank of lieutenant colonel, currently oversees field operations for all three state police districts, each of the three major crime squads, and the Bureau of Special Investigations.

“Having a number of different assignments within the State Police will allow me to better support my colleagues and work with the administration to make Connecticut a safe place to live and work,” Mellekas said in a statement.

As colonel, he will be the highest-ranking uniformed officer.

Rovella said the transition team gave him the resume of Rush-Kittle, who retired from the state police in 2015 as a major after 28 years — with interruptions for military deployments, most recently to Afghanistan in 2009 the command sergeant major of a military intelligence battalion. She was awarded the Bronze Star. 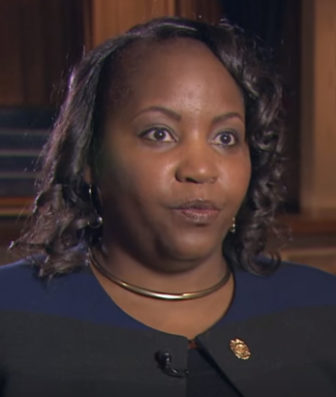 Rush-Kittle had a ground-breaking career with the state police as the first African-American woman to attain the ranks of sergeant, lieutenant and major and to serve as a barracks commander. She was a correction officer and Middletown police officer before  joining the state police and has been the second-in-command of the Millbury, Mass., police department for 19 months.

“I am grateful for the opportunity to return to public service in Connecticut,” Rush-Kittle said. “I enjoyed my time at DESPP working with the men and women who help keep this state safe, and I appreciate the opportunity to begin this next chapter of my career. Working together, we can ensure that Connecticut’s residents are safe and the criminal justice community and advocacy organizations alike are part of the solution.”

Rovella said her military and police resume make her a good fit to oversee homeland security and emergency services. She was mobilized in 2003 to support Operation Iraqi Freedom and again in 2009, deploying to Afghanistan.

“She was in the Middle East fighting terrorism,” said Lt. Gov.-elect Susan Bysiewicz, who went to high school in Middletown with Rush-Kittle. “That combined background and law enforcement and anti-terrorism is very important for the person in charge of emergency management in Connecticut.”