Starting the conversation, parenting through the opioid crisis 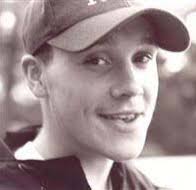 Kileen Doyle never spoke to her son about drugs while he was growing up. She wasn’t even aware that some of his classmates and friends in Norwalk were using.

That changed abruptly when her son’s long-time friend, a boy who had been on his swimming team and in his martial arts classes, died of an overdose: heroine mixed with valium, a prescription drug.

“I was completely unaware of drug use when my children were growing up, before Ian’s death,” said Doyle.

And, according to Ginger Katz, Ian’s mother, that’s not surprising at all. People – especially parents – simply didn’t talk about drug use.

“When Ian died, doctors told us to tell people that he died of a heart attack or a brain aneurysm,” Katz said. “But I wanted to speak out.”

Katz founded The Courage to Speak Foundation in 1996, shortly after her son died. Since then, her organization has become a leader in the drug prevention movement, bringing presentations to children, parents, educators and all types of professionals in Connecticut  and across the nation.

“Parents are the number one key to prevention,” Katz said. “But only one-third of parents talk to their kids about drugs.”

That’s why Katz, with support from the Department of Mental Health and Addiction Services’ (DMHAS) $22 million State Opioid Response Grant, will be presenting many more “Parenting Through the Opioid Crisis and Beyond” events in the coming year.

According to a study done by Yale University, the Courageous Parenting 101 program results in statistically significant increases in parents’ ability to communicate with their children about drugs. It also leads to increased knowledge about their children’s lives, improves their ability to recognize warning signs of substance use, and boosts their confidence so they can prevent their children from trying alcohol, tobacco, and other drugs.

The program has been rolled out in 13 cities and towns across the state, including Bridgeport, Hartford and New Haven. 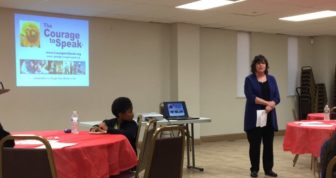 Ginger Katz at a Parenting Through the Opioid Crisis event in Hartford last October.

The two-year grant, which was awarded by the federal government, will also be used to expand access to medication-assisted treatment, increase the number of on-call recovery coaches at hospital emergency departments, provide pre- and post-release treatment and overdose prevention to inmates with opioid use disorders, and purchase 10,000 doses of Narcan.

“Right now there is a high focus on a public health approach,” Mason said. “We are focusing on healthy communities.”

This approach includes not only prevention presentations like Katz’s, but public awareness campaigns such as Change the Script, which connects town officials, community members and health care professionals with resources to help those suffering from drug addiction.

Today, Doyle – now a grandmother – speaks regularly to her 14-year-old grandson about the realities of drug use and abuse. She is comfortable doing this, she said, because she has listened to many of Katz’s presentations and has been a member of the Courage to Speak board since its inception.

“Ginger’s work certainly has helped me and helped my grandson’s mother be very aware of what is going on with children in schools,” Doyle said. “I think that being on my grandson’s side, being supportive, and being educated by courageous parenting has been invaluable.”

In her programs, Katz emphasizes that drugs and addiction can affect the whole family, so the whole family should be willing to discuss the risks and consequences of drug use.