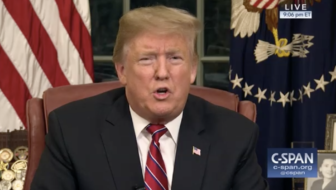 President Trump during his address to the nation Tuesday night about border security.

Washington — President Donald Trump sought to make a case to the nation Tuesday night for a wall between the United States and Mexico, saying it’s needed to prevent a worsening emergency at the southern border — something Congressional Democrats, including those representing Connecticut, derided as a fake crisis.

In a brief speech from the Oval Office that lasted less than 10 minutes, Trump portrayed immigrants seeking entry to the United States – most of them from Central America – as criminal gang members, smugglers and human traffickers.

“Over the years, thousands of Americans have been brutally killed by those who illegally entered our country, and thousands more lives will be lost if we don’t act right now,” Trump said.

But he also described the situation at the U.S.-Mexico border “a humanitarian crisis, a crisis of the heart and soul.”

As the partial government shutdown is nearly three weeks old, Trump’s speech did nothing to erode Democratic opposition to his demand for $5.7 billion to build a border wall, or “barrier” as the president called it in his speech. In fact, the partisan divide over the shutdown likely has widened.

Sen. Richard Blumenthal said Trump “continued to protect his own ego and pander to his base through falsehoods and xenophobic anecdotes.” 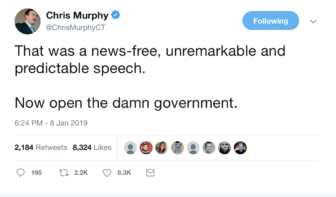 “My constituents back home in Connecticut shouldn’t have to wonder when they’re going to get their next paycheck or when they’re going back to work because the president isn’t getting his wall that no one on the border wants anyway,” he said. “President Trump and Senate Republicans need to end this shutdown and open the government today.”

Rep. Rosa DeLauro, D-3rd District, said, “Tonight, President Trump doubled down on heated rhetoric and lies regarding his manufactured crisis at the border. Instead of governing responsibly, he has taken our government hostage in order to make good on an empty campaign slogan. That is unacceptable.”

The White House on Tuesday pitched several immigration measures Democrats could support, including humanitarian aid for refugees detained, and often separated from their children, at the border, an increase in immigration judges who could process the backlog of asylum claims, and a promise to work with Congress to facilitate expanded in-country processing of refugee claims.

Democrats could also back the president’s call to boost spending to fight the trafficking of narcotics and weapons by $631 million.

“There are some areas where we could have agreement,” said Rep. Joe Courtney, D-2nd District. He said “the situation screams out” for the hiring of additional immigration judges to process asylum claims and other immigration cases and for greater efforts to block the smuggling of the synthetic narcotic fentanyl and other illegal drugs.

But Courtney said the president’s campaign promise of a border barrier “is the lowest solution” to the nation’s immigration problems, saying investment in technology would reap much greater results.

Analysts say the threats of illegal immigration outlined by Trump Tuesday night were greatly exaggerated, if not fabricated. The majority of heroin and other illegal drugs from overseas come through legal points of entry, not through other border areas. Immigrants are also less likely to commit crimes than native-born Americans. In addition, most undocumented aliens are entering the United States through airports, not the border, and overstaying their visas.

Trump invited congressional leaders, including key Democrats to the White House Wednesday for another meeting on the shutdown, but a breakthrough is not expected.

In a response to the president’s speech, House Speaker Nancy Pelosi, D-Calif., said “much of what we have heard from President Trump throughout this senseless shutdown has been full of misinformation and even malice.”

Blumenthal and other Democrats hope to win the war on messaging about the folly of replacing Ginsburg with a conservative.

Hayes in quarantine after staffer tests positive for COVID-19

Hayes said she is asymptomatic and 'awaiting an appointment to get tested.'

Democratic lawmakers, including Sen. Richard Blumenthal, are concerned that Durham's probe is being used to influence the election.