Ned Lamont finally is in ‘the room where it happens’ 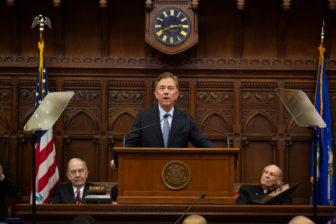 Connecticut’s new governor showed himself Wednesday to be affable, straightforward, optimistic, playful — and even slightly goofy — in his first address to the General Assembly, promising a collaborative approach to rebranding a state down on itself.

Less than two hours after taking office, Gov. Ned Lamont matter-of-factly warned lawmakers that the financially struggling state was teetering “on a knife’s edge,” then assured them he would deliver a budget in six weeks that would bring elusive fiscal stability.

“Let’s fix the damn budget, once and for all!” Lamont said. “You with me?”

“That’s it,” he said, his voice barely louder than a stage whisper. “Put the pressure on you.”

Exactly how that damn budget will be fixed, well, that is a matter that will wait until some time in February. On this day, the new governor was clearly reveling in the moment.

Lamont, 65, is a Greenwich businessman, a product of Phillips Exeter, Harvard and Yale, and an avowed fan of America’s most ebullient president, Teddy Roosevelt.

Over 23 minutes, Lamont had a bully good time.

He also is a fan of Hamilton, the musical. Lamont grew up in privilege, a man with a family tree in the U.S. that goes back to the time of Alexander Hamilton. But he made repeated references to Hamilton’s scrappiness and his burning hunger to be at the table where history is made, “the room where it happens.”

The line reflected Lamont’s losses in his two previous statewide campaigns for U.S. Senate in 2006 and the Democratic gubernatorial nomination in 2010.

“Thank you for welcoming me to the room where it happens,” Lamont told the legislators.

A prepared line on voluntarism turned into an impromptu riff on JFK’s inaugural, with Lamont leaning forward and offering a passable Kennedy imitation: Ask not what Connecticut can do for you, ask what you can do for Connecticut. As it turns out, Lamont thinks there’s plenty — from business, labor, politicians, pretty much everyone.

He assured the unions that supported him in the election that he remains committed to collective bargaining, then suggested he might be ready for some bargaining over pension liabilities. “As our liabilities continue to grow faster than our assets, together we have to make the changes necessary to ensure that retirement security is a reality for our younger, as well as our older, state employees, and we’ve got to do that without breaking the bank,” he said.

No hint at how, however.

His task Wednesday was to restate core principles, his approach to Connecticut’s various constituencies, and his expectation for how they all will come together. He warned of difficulties to come, changes he sees necessary in the delivery of government services by the state and municipalities.

“Mayors and first selectmen: Nothing will compromise your feisty independence,” Lamont said, smiling. “But so many services and back-office functions can be delivered at a much lower cost and much more efficiently if they are operated on a shared or regional basis.”

More applause for that line.

Lamont’s wife is Annie Huntress Lamont, a venture capitalist. At times, the governor sounded like a man making a pitch to investors — not expecting to close the deal, but drawing them in, suggesting there was something wonderful to come.

His vision for rebooting the Connecticut economy rests on four legs.

“First, I will take the lead by investing in the first all-digital government, and reverse engineer every transaction from the taxpayer’s shoes. The entry point to Connecticut will be through its digital front door, a one-stop-shop for everything our citizens need. We will be online, not in line,” Lamont said. “It won’t be done overnight, but let’s start today.”

“To attract millennials, top talent and leading companies, Connecticut will need to invest wisely in its urban centers, making them affordable and lively, where families want to live, work and play,” he said.

Third, Lamont signed on to a long-held dream of transportation planners and economic-development advocates, calling for a 30/30/30 rail system. That means 30 minutes fromm Hartford to New Haven, 30 minutes from New Haven to Stamford, and 30 minutes from Stamford to Grand Central in Manhattan.

He was interrupted with a sustained standing ovation.

The fourth leg is workforce development, ensurring that everyone in Connecticut is equipped to come along for the ride if Lamont ever upgrades his railroad. “It’s going to be an economy that works for everyone.”

The bipartisan applause stopped when Lamont turned to his campaign promises to establish a paid family and medical leave program and to raise the minimum wage in steps to $15, catching up to Massachusetts and New York.

“OK, as one of the first governors who comes from the business world, I know how to get this done,” Lamont said. “My primary objective is to get this economy growing again. How do we extend opportunity for those being left behind?

“What’s the long-term fix to our budget?

“How do we attract the next generation of talent to Connecticut?

He heard a particularly enthusiastic cheer to his right.

“Somebody liked that,” he said, chuckling again.

“All right, I’m a new governor. You’re a new legislature,” Lamont said. “What can you expect from me? I’m a straight shooter, an honest broker, and I think I’m a good listener. I know what I know, and what I don’t know. I do have a strong sense of where we need to go and what the people of Connecticut expect from us.”

Ned Lamont is finally in the room where it happens. Connecticut will find out in the coming weeks who is ready to sing along.