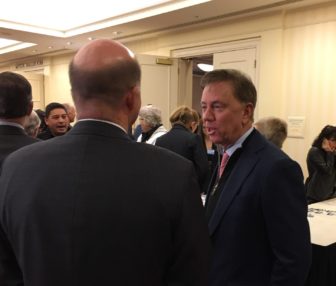 Groton — Gov. Ned Lamont got an early start Monday on his first full week in office, attending a 7:30 a.m. briefing by Electric Boat, the submarine manufacturer that is poised to double its waterfront workforce and approach Cold War employment levels in the next decade.

EB has $15 billion in government contracts, and its workforce recently topped 17,000 for the first time since 1992, Geiger said. Its Connecticut workforce is 12,500, including 6,000 engineers and designers and 3,000 men and women building and overhauling submarines at its shipyard on the Thames River.

Geiger is optimistic that new overhaul work is coming that will save the company from a dip in its shipyard employment before construction on a new Columbia class of ballistic submarines that will double employment by 2029 and keep it in growth mode for decades beyond that. EB hired 2,200 in 2018 for a net increase 1,110. It expects to add 1,400 jobs this year, with 900 in Connecticut.

“I think I know what we need to do here. I know that this is a part of the state where we have the wind at our back,” Lamont said in an interview after the briefing. “You heard those numbers. They are extraordinary numbers.”

Lamont, who mingled with lawmakers before sitting down for a quick breakfast of scrambled eggs and bacon, said Connecticut will be a partner in that growth, primarily by ensuring the company has access to a qualified workforce. He called Electric Boat an “engine of growth.”

“There is a role that the state’s going to play to facilitate that — a limited role. That’s all I can do is a limited role, but that’s why I’m here, and why I keep coming back.”

Lamont campaigned at EB and visited the company once since winning election in November.

Lamont is trying to find a messaging sweet spot in his first days. He is trying to convince a state with a shaky view of its own finances and future that economic growth is at hand, while not overpromising with unrealistic expectations.

The state has had successive quarters of economic growth and has recovered all the private-sector jobs lost in the Great Recession, but  Lamont still faces a projected deficit of about $1.7 billion — less than half of what confronted Gov. Dannel P. Malloy eight years ago, but a deep hole, nonetheless. 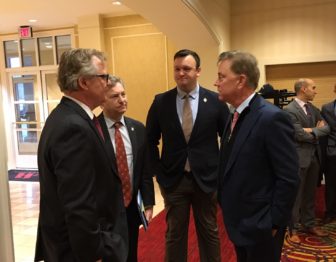 “You can see me struggle with that every day,” Lamont said. “First, we have to go over this chasm. I try. Everywhere I go I say this budget is going to be really hard, and I’m going to be asking a lot of all of you. And that includes the  business community and the labor community and taxpayers. I’ve got to solve this thing.”

He is making that outreach in public and private settings. Lamont, who lives in Greenwich, intends to use the Executive Residence in Hartford to network with lawmakers. He is planning a dinner with labor leaders.

“People need to get to know me,” he said. “We’re not going to get through this if we demonize each other.”

“He’s opening up the tent and trying to get as many people as possible in,” Formica said. “The fact is he wants everybody involved, at least at this point. So, we’re happy to give give him the benefit of the doubt and try to work with him. He’s a personable guy, and he’s got a good business background.”

Lamont, who hopes to spend every other weekend at his home in Greenwich, spent his first weekend as governor in Hartford. His wife, Annie, and three children explored the area. They made stops at the New Britain Museum of American Art and the Wadsworth Atheneum.

One of the benefactors of the Wadsworth was J.P. Morgan, who had successive generations of Lamont ancestors as his partners.