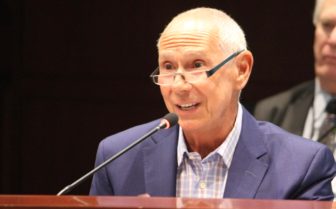 Mark Ojakian, president of the Board of Regents for Higher Education.

Mark Ojakian, president of the financially-troubled Connecticut State Colleges and University system, said Thursday he is embarking on a deep analysis of various tuition scenarios, including some free college models, to be weighed by the Board of Regents for Higher Education.

These options, which are motivated by a desire to attract more students and strengthen the system, are being considered against a backdrop of significant financial constraints due to cutbacks in state funding and declining student enrollment.

Ojakian said he will ask Gov. Ned Lamont’s administration if there is an opportunity in the short-term “to provide funding so we don’t have to raise tuition.”

Ojakian met Thursday with the regent’s executive committee to discuss whether they want to continue analyzing the half dozen tuition scenarios that CSCU staff brought to the regents’ finance committee in October in light of new leadership at the Capitol.

Among the options being considered by the regents is one that would guarantee a flat rate for entering freshmen for three years at community colleges and for five years at the state universities  — an approach designed to encourage students to graduate within a reasonable timeframe.

Another approach would allow students to get the last semester of college free as an incentive to complete a degree.

Ojakian said after the meeting that he favors tuition models that not only would be affordable for students but would provide incentives for them to graduate in a timely way.

He does not, however, favor making tuition at state colleges free for all students.

“I would not be in favor of saying it’s free for everybody regardless of their ability to pay,” Ojakian said, “because that takes resources that could be deployed elsewhere and provides students who can pay with a free opportunity.”

A Democratic proposal to make state colleges and state universities free for income-eligible students failed to get through the legislature last year. Ojakian said he expects lawmakers will again propose a free college bill.

Although the concept of providing free education is “compelling,” he said, it’s also important to consider whether students will access to the services they need.

“It doesn’t do a student any good to get in the door and eight years later still be trying to navigate the system because they don’t have access to an adviser,” Ojakian said.

Ojakian noted that about a third of students already attend community college  essentially for free because they are covered by federal Pell grants. He said an even larger percentage get some help through Pell.

If students don’t graduate in a timely way, it often is more costly for them, Ojakian said, and many, he said, get frustrated and leave.

Ojakian said he hopes to have a conversation with state leaders and legislators, reminding them that the CSCU system “is the engine for economic development in the state of Connecticut, both at the community college and at the university level … Are we going to be considered a priority in terms of funding or continue to have cuts year after year?”

While free college  would require an additional state investment, Haddad said he thinks the offer would rapidly pay for itself by strengthening college enrollment and producing the kind of skilled workforce that will attract employers to the state. He noted that Rhode Island and New York are already offering free college programs.

Haddad estimated a free college program would cost the state about $60 million. “As an overall percentage of our budget, that’s remarkably small,” he said.