Editor’s Note: This story was updated on January 19 with the special counsel office’s statement.

Washington – Reacting to a report that President Donald Trump directed his former lawyer, Michel Cohen, to lie to Congress about the president’s plans for a Moscow real estate project, Sen. Chris Murphy wants special counsel Robert Mueller to “show his cards to Congress before it’s too late.”

Murphy’s tweeted remark follows confirmation hearings earlier this week at which William Barr, Trump’s nominee for U.S. attorney general, would not commit to making public Mueller’s final report on his probe of ties between Russia and the Trump campaign, or give Congress an unredacted copy of that report. 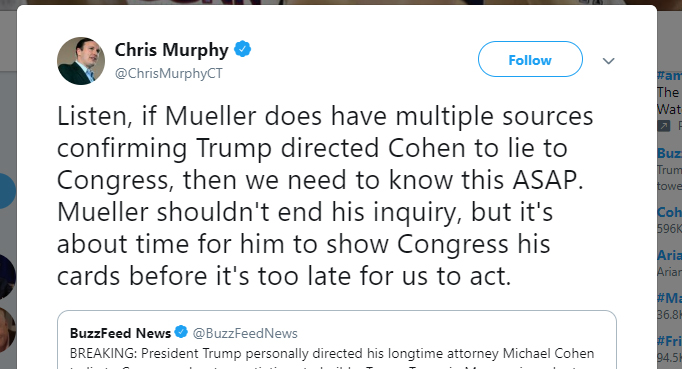 Under questioning by Sen. Richard Blumenthal, D-Conn., Barr said his “purpose is to get as much information out as I can, consistent with the regulations.” But Barr’s testimony before the Senate Judiciary Committee prompted Democrats to say they fear a coverup. Barr also told senators that anyone who encourages another to lie to Congress is committing obstruction of justice, a federal crime.

Then on Thursday night, BuzzFeed ran a story based on anonymous government sources — which the special counsel’s office a day later said was inaccurate —  that said Trump personally directed Cohen to lie to Congress about the president’s push for a Moscow real estate project ahead of the 2016 election.

BuzzFeed reported that during questioning by Mueller, Cohen said the president directed him to deceive Congress about key facts linking Trump to the proposed deal in Russia. Cohen pleaded guilty in November to lying under oath about those details.

“Listen, if Mueller does have multiple sources confirming Trump directed Cohen to lie to Congress, then we need to know this ASAP,” Murphy tweeted upon the release of the BuzzFeed story. “Mueller shouldn’t end his inquiry, but it’s about time for him to show Congress his cards before it’s too late for us to act.”

Trump attorney Rudy Giuliani said “any suggestion – from any source – that the President counseled Michael Cohen to lie is categorically false.”

Then, about 24 hours after the BuzzFeed story was published, Mueller’s office issued a statement saying it was inaccurate. But it did not specifically say what in the story was wrong.

“BuzzFeed’s description of specific statements to the special counsel’s office, and characterization of documents and testimony obtained by this office, regarding Michael Cohen’s congressional testimony are not accurate,” said Mueller spokesman Peter Carr in statement.

BuzzFeed said it stands by its story and that the special counsel should explain what, exactly, is inaccurate.

Before Mueller’s office issued its statement on Friday, House Democrats, who now hold the gavel in that chamber’s investigative committees said they plan to investigate the BuzzFeed allegations.

“We know that the President has engaged in a long pattern of obstruction,” Rep. Jerry Nadler, D-N.Y., head of the House Judiciary Committee said in a tweet. “Our job is to get to the bottom of it, and we will do that work.”

And Blumenthal has asked Sen. Lindsey Graham, R-S.C., the head of the Senate Judiciary Committee, to look into the matter.

“Our committee must conduct a thorough investigation of the President’s involvement in these crimes and whether he obstructed justice to hide them,” Blumenthal said. “This is our Constitutional duty not just as members of the Senate Judiciary Committee, with jurisdiction over federal criminal statutes and campaign finance law, but as members of Congress, a co-equal branch of government whose role is to serve as a check on the Executive Branch and the President.”